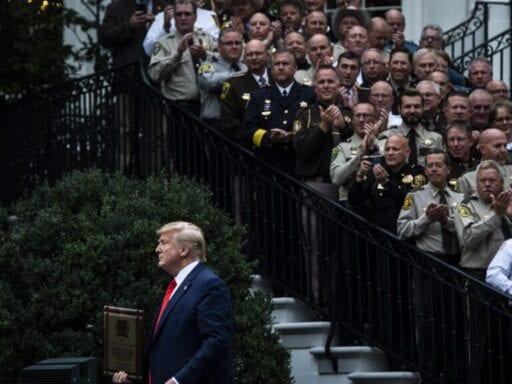 Trump says the Ukraine complaint is “a fraud.” But key parts of it have already been confirmed by his administration.

President Donald Trump and his supporters want you to believe that the whistleblower who accused him of abusing his office by trying to strong-arm the Ukrainian government into investigating Joe Biden has the facts wrong. But the reality is that the White House itself has already corroborated two of the whistleblower’s key allegations.

Trump on Monday morning tweeted that “[t]he Fake Whistleblower complaint is not holding up. It is mostly about the call to the Ukrainian President which, in the name of transparency, I immediately released to Congress & the public. The Whistleblower knew almost nothing, its 2ND HAND description of the call is a fraud!”

Trump’s tweet, which was echoed on Fox & Friends Monday morning by his son, Eric Trump, was just the latest instance of the president trying to discredit the whistleblower as merely having “SECOND & THIRD HAND INFORMATION” or “information that proved to be so inaccurate that there may not have even been somebody else, a leaker or spy.” Meanwhile, Trump backers such as House Minority Leader Kevin McCarthy (R-CA) and Sen. Lindsey Graham (R-SC) have spun the complaint as mere “hearsay.”

In reality, however, the opposite is true. The memorandum (or “transcript”) the White House released last Wednesday about Trump’s call with Ukrainian President Volodymyr Zelensky corroborated arguably the most central allegation in the whistleblower’s complaint: that Trump asked Zelensky to investigate Biden. And the White House has since corroborated another key allegation the whistleblower made about the White House’s extraordinary efforts to limit the dissemination of information about the call.

With regard to the Trump-Zelensky call, the whistleblower said in his complaint that according to “[m]ultiple White House officials with direct knowledge” of it, Trump used the majority of his time on the phone with Zelensky “to advance his personal interests. Namely, he sought to pressure the Ukrainian leader to take actions to help the President’s 2020 reelection bid” by investigating Biden.

That account of the call uncannily matches the memo about it released by the White House. According to the memo, after Trump congratulated Zelensky on his win and criticized other European countries who have “done almost nothing for you,” he asked the new Ukrainian president to “do us a favor” and brought up his desired investigations into the origins of the FBI’s Russia probe that concluded Russia interfered in the 2016 election on his behalf — and also asked for an investigation into Biden.

Not only was the whistleblower correct about the broad outlines of the Trump-Zelensky call, but he had particular details right. For instance, the complaint alleges that Trump pressured Zelensky to “meet or speak with two people the President named explicitly as his personal envoys on these matters, [his personal lawyer Rudy] Giuliani and Attorney General [William] Barr, to whom the President referred multiple times in tandem.”

That allegation is confirmed by the White House’s memo:

As the above excerpt from the White House memo indicates, the whistleblower also correctly characterized the call when he alleged that Trump praised a prosecutor who had expressed interest in investigating the Bidens but was fired on corruption concerns, Yuriy Lutsenko, “and suggested that [Zelensky] might want to keep him in his position.”

Not only did the White House corroborate the whistleblower’s account of the Trump-Zelensky phone call, but it also corroborated his allegation that afterward, “senior White House officials had intervened to ‘lock down’ all records of the phone call.”

More from the whistleblower’s complaint:

This allegation was corroborated by the White House. CNN reported that “[t]he White House acknowledged Friday that administration officials directed a now-infamous Ukraine call transcript be filed in a highly classified system, confirming allegations contained in a whistleblower complaint that have roiled Washington.”

In a statement provided to CNN, a senior White House official said the move to place the transcript in the system came at the direction of National Security Council attorneys.

White House officials, including Kellyanne Conway, have struggled to explain why, if there was really nothing wrong about Trump’s behavior during the call, officials went to unusual lengths to try and suppress information about it.

Kellyanne Conway had no answers other than insults when @AndrewFeinberg asked her to explain why officials took extraordinary measures to give Trump’s “perfect” Ukraine call top secret classification – something that should be explainable if there really was nothing wrong with it pic.twitter.com/1HLhXLydue

In fact, the whistleblower’s account of how the White House tried to restrict the spreading of information about the call matches the White House’s down to the specific government agency involved. From the complaint:

According to multiple White House officials I spoke with, the transcript of the President’s call with President [Zelensky] was placed into a computer system managed directly by the National Security Council (NSC) Directorate for Intelligence Programs. This is a standalone computer system reserved for codeword-level intelligence information, such as covert action. According to information I received from White House officials, some officials voiced concerns internally that this would be an abuse of the system and was not consistent with the responsibilities of the Directorate for Intelligence Programs.

That Trump and his backers continue to insist the whistleblower peddled mere “hearsay” that was somehow refuted even after the White House confirmed key parts of the complaint illustrates just how ineffective his pushback has been to the whistleblower thus far.

Trump seems to be having a hard time justifying his behavior on the merits. Consider, for instance, how his rationale for why he decided to withhold aid from Ukraine just ahead of his phone call with Zelensky changed overnight last week. Given his difficulty explaining his actions, Trump wants people to believe that the whistleblower got the facts wrong. But Trump isn’t able to cite anything specific the whistleblower got wrong because the key allegations have already been corroborated by his own administration.

Nevertheless, Trump and his allies persist. Lindsey Graham, for one, isn’t letting facts get in the way of his “hearsay” narrative. After he dismissed the whistleblower complaint as such during an interview on CBS’s Face the Nation on Sunday, host Margaret Brennan pointed out to him that “the complaint on a number of fronts is matched by the call record” released by the White House.