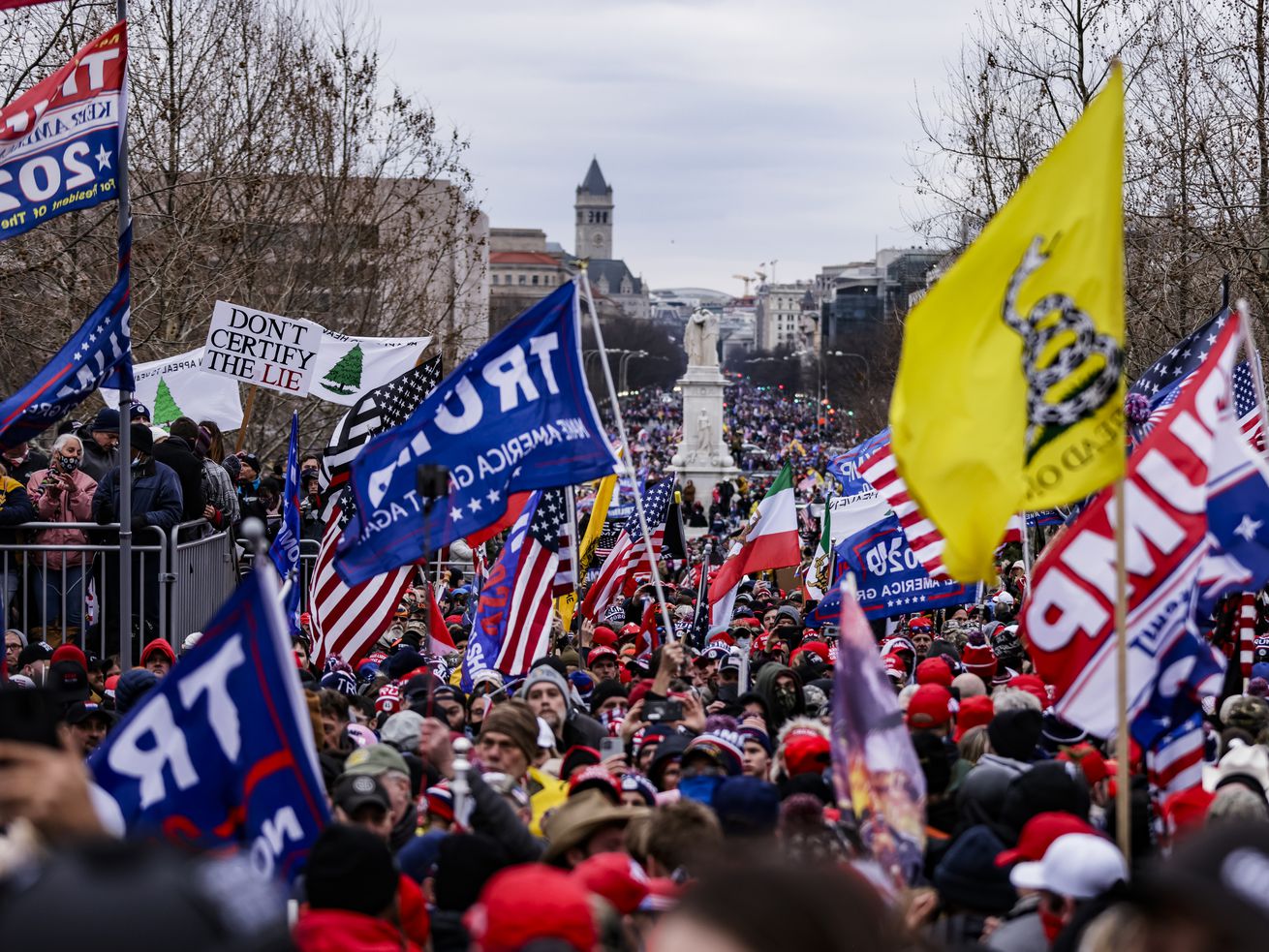 Trump’s lawyers want you to believe his pre-insurrection speech was focused on election security and peaceful protest.

The pre-trial brief prepared by former President Donald Trump’s attorneys ahead of his second impeachment trial, slated to begin Tuesday, constructs an alternative reality regarding the chain of events that proceeded the deadly January 6 insurrection at the Capitol, and resulted in his impeachment on a charge of incitement.

To hear Trump’s lawyers tell it, just before the insurrection, Trump delivered a speech to his followers in which he focused on election security issues and urged them to remain calm and peaceful. Because he did not explicitly direct them to commit crimes, and because a few of the rioters may not have been supporters of his, they argue, the Senate must acquit.

“Words do matter and the words of President Trump’s January 6th speech speak for themselves,” the brief states. “President Trump did not direct anyone to commit lawless actions.”

That sounds nice, but it doesn’t capture what actually happened on January 6. In reality, the main theme of Trump’s speech was the need to “fight like hell” in hopes of stopping Congress from certifying his Electoral College loss to now-President Joe Biden — an effort that culminated in a mob of his supporters overrunning law enforcement officers in a riot that ultimately claimed five lives and nearly allowed rioters to lay hands on members of Congress who fled the House and Senate chambers under duress.

The new brief fleshes out the defense Trump’s attorneys will use during his impeachment trial, which will be the first ever held for an ex-president. It indicates his team will both try to cast the events of January 6 in a light that absolves Trump of responsibility, as well as make procedural arguments about the purported unconstitutionality of convicting an ex-president that Republican senators have already indicated they’re sympathetic to.

While Trump’s defense may end up being successful, it’s misleading. The over 70-page brief ignores the reality that Trump’s January 6 speech didn’t happen in a vacuum. It came at the end of two-month post-election period in which Trump relentlessly pushed big lies about the election and tried to bully state officials into overturning the results for him, agitating supporters of his he then summoned to the Capitol for a protest he planned would be “wild.” And in that respect, he wasn’t lying.

Trump’s lawyers’ brief repeatedly mentions one line from Trump’s January 6 speech in which he said, “I know that everyone here will soon be marching over to the Capitol building to peacefully and patriotically make your voices heard” — the idea being that since Trump told his supporters to remain peaceful, he didn’t incite anything.

But that remark was buried deep in a more than hour-long speech in which he used the words “fight” or “fighting” at least 20 times, saying things like “we’re going to have to fight much harder” and “we will not let them silence your voices. We’re not going to let it happen.” A single mention in passing of peace cannot unring that bell.

The brief uses similarly out of context arguments to dismiss the idea that Trump’s remarks might’ve been taken as a call for insurrection.

“Notably absent from his speech was any reference to or encouragement of an insurrection, a riot, criminal action, or any acts of physical violence whatsoever,” it says, adding later: “What is required, to forfeit constitutional protection, is incitement speech that ‘specifically advocate[s]’ for listeners to take unlawful action.”

The argument is that Trump didn’t literally say “go commit crimes,” therefore he didn’t incite anyone to do so. While that argument may hold water in a criminal proceeding, an impeachment trial is political, and it’s worth keeping in mind the broader context: Trump was speaking to an angry crowd of his supporters just ahead of a march to the Capitol aimed at intimidating lawmakers into overturning the results of a free and fair election.

Gateway Pundit is not a source any lawyer should cite

Trump has had a difficult time assembling a legal team to defend him during his second impeachment trial. His initial team departed late last month amid reports Trump wanted them to use the trial as a forum to relitigate his lies about the election being stolen from him. The new team, headed by trial attorney David Schoen and Bruce Castor Jr., doesn’t invoke those lies in their pre-trial brief — but one footnote in particular stands out as an example of shoddy work.

That footnote suggests some of the January 6 rioters weren’t Trump supporters, citing the presence of at least one Black Lives Matter supporter in the Capitol during the riot. Its source? An article from Gateway Pundit, a far-right conspiracy site whose founder, Jim Hoft, was just banned from Twitter. That article insists “anti-Trump groups primarily perpetrated” the insurrection. In reality, however, the rioters were filmed chanting things like “We want Trump!” and “Stop the steal!” while wearing Trump campaign merchandise and waving Trump flags.

It’s not the only example of questionable defense work: Another footnote in the brief all but acknowledges that Trump pushed false claims about the election.

After the attempt to rewrite the history of January 6, the brief makes a series of dubious procedural arguments that convicting a president of an article of impeachment after they’ve left office is unconstitutional and would also be a violation of Trump’s first amendment rights. But what the free speech argument misses is that the first amendment is a protection against criminal prosecution, not impeachment.

As my colleague Andrew Prokop detailed, the case Democrats outlined in their brief focuses on things we all saw with our own eyes: Trump spent months lying about election fraud, encouraged his followers to assemble in DC on January 6 and urged them to “fight like hell,” posted a tweet attacking Vice President Mike Pence as a mob of his supporters hunted for him in the Capitol, and was slow to do anything to stop the rioting.

A conviction means Trump could be barred from running for office again. That’s unlikely to happen. The Trump team’s legal brief may have some glaring problems, but it’s unlikely to affect the outcome of Trump’s trial. Convicting Trump requires 67 votes, meaning 17 senators would have to vote with all 50 Democrats for conviction. But 45 Republican senators have already voted to dismiss the trial due to procedural objections, and the brief echoes arguments Trump defenders have been publicly making.

So while Trump’s second impeachment trial is important for establishing a public record of what happened on January 6 and why, Republicans have telegraphed that the outcome will likely be the same as the first.

How feds used a YouTube livestream to arrest a Portland protester
Woody Allen’s strange, delayed new movie, explained
7 key moments from Joe Biden’s inauguration special
Covid-19, explained by Carl (who has it)
The devaluing of black property has led to the devaluing of black lives
The private chefs risking their lives to feed the super rich