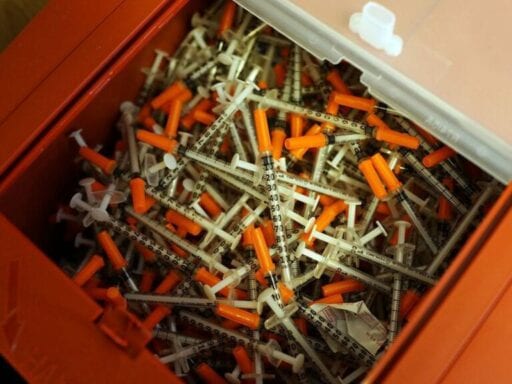 A showdown over safe injection sites is brewing between the federal government and cities.

President Donald Trump’s Department of Justice is threatening the possibility of federal prosecution against cities that allow supervised consumption sites.

“It remains illegal under federal law,” Rosenstein said. “And people engaged in that activity remain vulnerable to civil and criminal enforcement.”

He added that there’s a possibility that the feds will use federal law to go after city officials who allow supervised consumption sites to open:

We also have the ability and the Controlled Substances Act to pursue an injunction that is a civil order that a court would impose to order somebody to stop engaging in unlawful activity to stop distributing drugs illegally. And so both of those tools are available, and … if the situation arose where we determine that somebody was in violation of the law, we’d have to evaluate the facts and make a determination about what’s the appropriate approach to take.

Several cities are looking into supervised consumption sites, including Philadelphia, New York City, San Francisco, and Seattle. It remains unclear when the sites will open.

But the Justice Department has long warned that it could use federal law — some of which was written to target crack houses — to shut down any location that allows illicit drug use. In a statement last year about a proposal to open supervised consumption sites in Vermont, the Justice Department, led by Attorney General Jeff Sessions, warned that the facilities “would violate federal law.” The Justice Department claimed in a statement, “It is a crime, not only to use illicit narcotics, but to manage and maintain sites on which such drugs are used and distributed.”

As I wrote last week, the evidence for supervised consumption sites is fairly weak — with not enough studies clearing a rigorous bar of research to really say one way or the other whether the sites are effective at reducing drug overdose deaths and other drug-related outcomes.

At the same time, the research has not supported the Justice Department’s claims that these sites actually make drug use and crime worse.

Rosenstein said on WHYY that the sites enable more drug use and addiction, and claimed in the New York Times that the sites “destroy the surrounding community” by attracting drug dealers as well as crime and violence.

But while the research isn’t good enough to make hard conclusions either way, a meta-analysis from researchers at the University of South Wales in the UK found evidence that supervised consumption sites may be associated with slightly lower levels of drug-related crime.

Advocates have pushed supervised consumption sites in response to the worsening opioid epidemic. Overdose deaths in 2017 reached a record 72,000, at least two-thirds of which were linked to opioids, according to preliminary data from the Centers for Disease Control and Prevention. The mounting death toll has driven cities and states to look for just about any solution that could help stem the crisis.

Another study last week, from Stanford researchers, pointed to a mix of potential solutions to the opioid crisis: significantly improved access to addiction treatment (particularly opioid addiction medications like methadone and buprenorphine), boosts to harm reduction efforts like needle exchanges and the distribution of the opioid overdose antidote naloxone, and some strategies to reduce opioid painkiller prescriptions. All of these policies could use greater levels of support, the research suggested.

Despite stiff federal resistance, local officials have told news outlets that they plan to move ahead with supervised consumption sites anyway. That could lead to a showdown between the Justice Department and city governments in the very near future.

For more on the research for supervised consumption sites, read Vox’s explainer.

How 2020 presidential campaigns and convention planners are handling potential coronavirus outbreaks
Hurricane Dorian photos: the aftermath of a Category 5 storm
Read Trump’s speech to the UN General Assembly
Jared Polis could become America’s first openly gay elected governor
How Trump’s new immigration plan could hurt the economy
A suspect has been arrested in the pipe bombs case: what we know