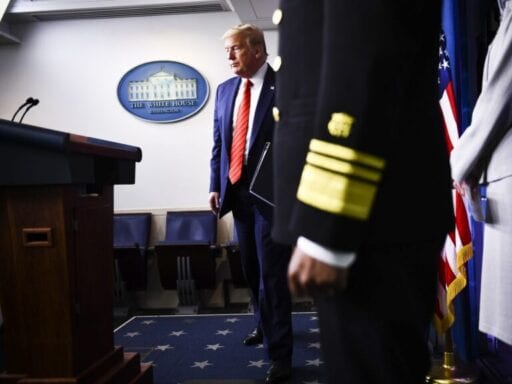 President Trump arrives for the daily briefing on the coronavirus at the White House on March 19, 2020. | Brendan Smialowski/AFP via Getty Images

We need clear guidance during a national crisis. Trump is failing.

In times of national crisis, the country is supposed to rely on the president to provide clear messages to guide them through new problems. But as America continues to deal with the coronavirus outbreak, President Donald Trump is failing.

That was very clear at Thursday’s daily coronavirus press briefing, as Trump went on long, boastful rants, talked about unrelated topics, and joked about kicking journalists out of daily press briefings. At times, it was unclear what Trump was talking about at all.

While discussing some of the federal government’s work to establish new treatments for Covid-19, the disease caused by the novel coronavirus, he started to boast about passing “right to try,” an unrelated law that attempts to let terminally sick people use experimental drugs.

Here is just one small section of Trump’s comments:

We’re also reviewing drugs that are approved abroad or drugs approved here for other uses. And, you know, one of the things that I’m most proud of that I got was “right to try.” That’s where somebody who is ill, somebody who is very sick — terminally ill, usually. In past administrations — we signed this a year and a half ago — you wouldn’t even be able to think about getting these drugs. They’ve been trying for decades to get these drugs approved. And it sounds simple, but it’s not. There’s liability and all kinds of things. I was able to get it approved — “right to try.” This is beyond “right to try.” What we’re talking about today is beyond “right to try.” “Right to try,” by the way, has been a tremendous success. People are living now that had no chance of living.

As part of this, Trump also muddled messaging about what treatments are coming down the line, delivering a long series of remarks that were similarly hard to follow.

At other points during the press conference, Trump cited social distancing efforts to joke about kicking journalists who are critical of him out of daily press briefings. “You’re actually sitting too close,” he told reporters at the briefing. “Really, we should probably get rid of about another 75, 80 percent of you. I’ll have just two or three that I like in this room. I think that’s a great way of doing it. We just figured a new way of doing it.”

At another point, Trump went on an extended ramble about “fake news” — a term he took credit for inventing — and how the media has been so unfair to him.

During normal times, these unclear, random rants are bizarre but possible to overlook — we’ve even gotten a bit accustomed to them with Trump as president. But during a national crisis, it’s dangerous.

Leadership is more important now than ever

It’s during these kinds of times, experts say, that people need leaders to provide clear guidance. “You really need to very strong leadership from the top,” Céline Gounder, an epidemiologist at New York University, told me.

Trump has not done that. Besides an uncharacteristically competent press conference on Monday, he has downplayed the risks of Covid-19 — comparing it to the common flu, which isn’t as dangerous as the novel coronavirus, and suggested that “one day it’s like a miracle, it will disappear.” At one point, he called concerns about the virus a “hoax.”

Public health experts have been highly critical of Trump’s messaging. Ashish Jha, director of the Harvard Global Health Institute, previously called it “deeply disturbing,” adding that it’s “left the country far less prepared than it needs to be for what is a very substantial challenge ahead.”

While Trump has started to take the threat of coronavirus more seriously in his public remarks since Monday, he’s used racist, xenophobic language to describe the virus. That continued on Thursday as well.

Trump could have given the podium over to his administration’s coronavirus task force leaders and experts, who have generally done a much better job over the past few weeks messaging what needs to be done. While Trump typically does this at some point in the press conferences, it’s not until after he’s delivered a ramble of his own — and the experts are often forced to clarify or amend the president’s comments. Indeed, FDA Commissioner Stephen Hahn on Thursday had to clarify that upcoming coronavirus treatments are being tested and offered through traditional means, not “right to try.”

The result is Americans are less likely to understand what is going on, what the government is doing to help them, and what is expected of all of us to help combat the crisis. It makes a bad situation even worse.