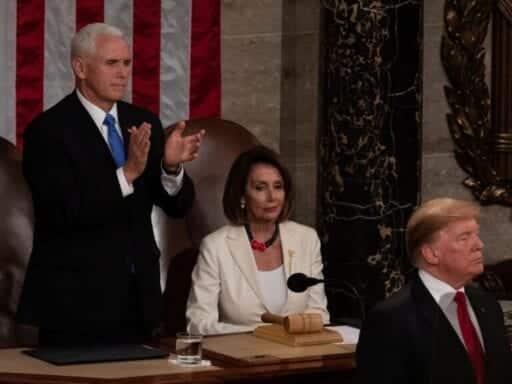 Share
Loading...
Pelosi and Trump at this year’s State of the Union. | Photo by Cheriss May/NurPhoto via Getty Images

Journalists get fired for this sort of thing.

It’s not exactly a hot take these days to point out that President Donald Trump lies a lot. What doesn’t get as much attention is his propensity to completely fabricate quotes and attribute them to his political foes.

Recently, to defend himself against the impeachment inquiry, Trump has made up two different quotes and put them in Nancy Pelosi’s mouth. Both of them were aimed at misleadingly portraying the House Speaker as obsessed with getting him out of office.

Early Tuesday morning, Trump tweeted that Pelosi said “it is dangerous to let the voters decide Trump’s fate” — a comment that, if true, would bolster the “coup” narrative he’s been pushing.

Nancy Pelosi just stated that “it is dangerous to let the voters decide Trump’s fate.” @FoxNews In other words, she thinks I’m going to win and doesn’t want to take a chance on letting the voters decide. Like Al Green, she wants to change our voting system. Wow, she’s CRAZY!

Pelosi, however, never said that. Trump, as the Washington Post details, appears to have lifted the misquote from a Fox News segment he watched about Pelosi’s comments about an hour earlier. What Pelosi actually said in a “Dear Colleague” memo was, “The weak response to these hearings [among Republicans] has been, ‘Let the election decide.’ That dangerous position only adds to the urgency of our action, because the President is jeopardizing the integrity of the 2020 elections.”

Pelosi’s comments alluded to Trump’s efforts to leverage the Ukrainian government into interfering in the 2020 election on his behalf. Instead of pushing a “coup,” what she was saying is that holding impeachment hearings now is not only important in terms of getting to the bottom of Trump’s conduct, but also in terms of making sure he doesn’t benefit from foreign interference again.

As reckless as pushing false quotes in any circumstance is, Trump’s Pelosi misquote could’ve resulted from a mistaken recollection of something he saw on TV. But during an interview with Fox News contributor Dan Bongino that was published online last Friday, Trump flat-out put words in Pelosi’s mouth.

“She said, ‘You can’t impeach a man on this call!’” Trump told Bongino, despite the fact that Pelosi said no such thing.

Trump keeps adding details to his imaginary tale about Pelosi being furious when she saw how underwhelming the text of Trump’s call was.

In an interview with Dan Bongino, Trump said, “I’ve heard that Nancy Pelosi blasted them. She said, ‘You can’t impeach a man on this call!'” pic.twitter.com/G1kKMOqwMx

Pelosi, in fact, responded to the White House releasing the call memo with a stern statement saying the document “confirms that the President engaged in behavior that undermines the integrity of our elections, the dignity of the office he holds and our national security. The President has tried to make lawlessness a virtue in America and now is exporting it abroad.”

Daniel Dale of CNN reports that Trump has now fabricated five quotes from Pelosi. And it’s not just her — Trump has also put fake words in the mouths of Barack Obama and Al Green.

If a journalist did this sort of thing, they’d likely lose their job. It says something that when this president does it, it’s barely a blip on the news radar.

Trump is postponing the Putin visit until after the “Russia witch hunt”
The only reason that Trump hasn’t been indicted is that he’s the president
Senate Democrats say the Republican police reform bill is “not salvageable”
“Medicare-for-all” means something. Don’t let moderates water it down.
Iran, China, and war: Foreign policy topics to watch for in the January debate
People are still being punished for “Living While Black.” Now one man is taking legal action.