Trump’s latest plan to use the census for political gain, explained 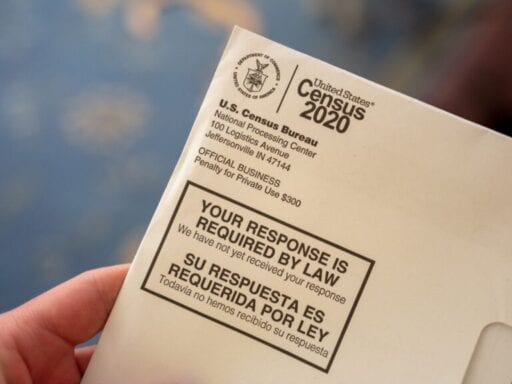 His decision to end data collection a month early could lead to undercounts among communities of color, immigrants, and those in rural areas.

President Trump has fired another shot in his war on the 2020 census.

His administration announced earlier this week that it will conclude operations for the census a full month earlier than previously scheduled. With about four in 10 households yet to be counted, the move will likely lead to an undercount among historically hard-to-count populations, including people of color, immigrants, and those in rural areas.

The Census Bureau will now stop soliciting responses — by mail, online, or in-person when census takers go door-to-door — on September 30. The Bureau had originally pushed back the deadline for collecting data from August 15 to October 31 on account of disruptions due to the Covid-19 pandemic, but it moved up the date on the basis that it was necessary in order to meet its statutory December 31 deadline to provide census figures to Congress.

It’s likely Monday’s decision will mean that hard-to-count populations, which include renters, low-income people, and children under the age of 5, could be undercounted, eroding their political power and undercutting their federal funding over the next decade.

States currently draw congressional districts, determining the areas that each elected official represents based on the total population, including unauthorized immigrants. The current maps are due to be redrawn in 2021 after the results of the 2020 census come in, and the stakes are high: Each redistricting has a lasting influence on who is likely to win elections, which communities will be represented in Congress, and, ultimately, which laws will be passed. If states can’t complete their redistricting efforts ahead of upcoming elections, including the midterms in 2022, courts can intervene and draw temporary maps.

The Trump administration’s attempt to cut census operations short will likely reduce the counts in hard-to-count areas across the US, particularly in numerous congressional districts where the response rates remain at least 10 points below the 2010 response rate.

As of August 4, the national self-response rate is still lagging 3.5 percent behind the final 2010 self-response rate of 66.5 percent. And at this point in the process, it’s unlikely that significantly more people will self-respond to close that gap. That means that the Census Bureau will have to do more door-knocking than in the previous census to ensure an accurate count, but the administration’s decision to cease operations in September will cut that process short.

Nevertheless, the Census Bureau said Monday that it expects to obtain a “similar level of household responses as collected in prior censuses, including outreach to hard-to-count communities.”

But Rob Santos, vice president and chief methodologist at the Urban Institute and president-elect of the American Statistical Association, said that in order to capture households that failed to self-report, the Bureau will have to rely much more heavily on reports from their neighbors, which are not nearly as accurate.

It will also have to rely on administrative records, including Social Security and Internal Revenue Service data. That could be a problem — the hard-to-count households are precisely the kind of households for which the federal government lacks reliable administrative records. For instance, unauthorized immigrants do not have Social Security numbers and may rely on a cash economy without filing taxes with the IRS (though to be clear, many of them do file taxes).

“Everything hinges on the quality of those data,” Santos said. “Everything is adding up to one of the most flawed censuses in history.”

A day after the Census Bureau’s announcement, four former census directors urged in a statement to the Trump administration to delay the deadline to respond to the census until April 2021. They also called on Congress to assign an independent, apolitical institution to develop metrics for judging whether the final census numbers are reasonably accurate and, if not, determine the next necessary steps.

“Having helped to plan, execute or lead five decennial censuses serving nine Presidents of both parties, our expert opinion is that failing to extend the deadlines to April 30, 2021 will result in seriously incomplete enumerations in many areas across our country,” they said.

Latino and immigrant advocates have called the decision to conclude census operations early a blatant attempt to suppress the voting power of their communities. About 62 percent of Latino registered voters identify with or lean toward the Democratic Party, according to a January 2020 Pew Research survey.

“It’s an attempt at political beheading of the Latino vote,” Domingo Garcia, the national president of the League of United Latin American Citizens, or LULAC, said. “It just reeks of political opportunism.”

In Texas, a historically red state, Latinos make up roughly 40 percent of the population and are expected to become the largest population group in the state by 2022, according to Census Bureau projections. But Santos says he’s concerned about how the 2020 census could undercut predominantly Latino communities in Texas’s Rio Grande Valley. They have been difficult to count in the past: More than one-third of families in the region live in poverty and some are unauthorized immigrants. But it’s even harder now that they’re also grappling with one of the most severe Covid-19 outbreaks in the country and are still recovering from the damage caused by Hurricane Hanna, which made landfall in late July.

The best way to improve response rates in the area would be to go door-to-door. Garcia said that LULAC had reached out to Senator John Cornyn, a Texas Republican, urging him to support efforts to count Latino communities in the state, which could increase state funding for health care and education. But Cornyn’s office has been quiet. (His office did not immediately respond to requests for comment.)

“We need equity in our society,” Santos said. “If there is one thing that’s come out of Covid, it is a scream for equity in this country. This is not only going to exacerbate that problem, but it’s going to reinforce the systemic racism that already existed.”

Rural communities will also suffer from the shortened census timeframe. Howard Fienberg, co-director of the Census Project, an organization that supports an accurate and inclusive census, said that he’s particularly worried by the self-response rates for Oklahoma, where there is high variation at the county level: One county has an almost 70 percent response rate, while about half of the state’s counties are in the range of 30 to 50 percent.

“A shortened period of non-response follow-up and minimal time to effectively boost any more self-response is unlikely to make a big dent in those numbers,” he said.

It’s not the first time that Trump has politicized the census. He previously sought to put a question about citizenship status on the 2020 census. Several states, including California and New York, challenged the question in court on the basis that it would depress response rates among immigrant communities, leading to an undercount that would cost their governments critical federal funding. Their lawsuit came before the Supreme Court, which ruled in their favor in June 2019 on the basis that the Trump administration had lied about why it chose to include the question on the census.

Trump, on the other hand, argued that citizenship data would aid the Department of Justice’s enforcement of the prohibitions against racial discrimination in voting. But that rationale was just a pretext, introduced after the fact to justify the question and meant to obscure the administration’s actual reasoning, the justices found.

Had the administration decided to continue pursuing the citizenship question, it would have had to race to support its decision with more valid reasoning in order to print the census forms on time.

Trump ultimately decided against doing so, instead issuing an executive order in July 2019 that instructed the US Census Bureau to estimate citizenship data using enhanced state administrative records.

Trump has facilitated the creation of that data, though it’s not clear just how accurate it is. The executive order authorized the Census Bureau to collect more data from Immigration and Customs Enforcement, Customs and Border Protection, and Citizenship and Immigration Services in an attempt to identify the citizenship status of more people. The bureau later started asking states to voluntarily turn over driver’s license records, which typically include citizenship data, to determine the citizenship status of the US population.

Trump later revealed how he intended to use that data: He issued a memorandum in July excluding unauthorized immigrants living in the US from census population counts for purposes of redrawing congressional districts in 2021, as legislators in Texas, Arizona, Missouri, and Nebraska had already sought.

The White House argued that by law, the president has the final say over who must be counted in the census. And Trump has said that unauthorized immigrants should not be counted because it would undermine American representative democracy and create “perverse incentives” for those seeking to come to the US.

But many legal experts have characterized the memorandum as baldly unconstitutional; some Republicans have even been reluctant to endorse it because it could hurt the population counts in their home states.

The memorandum has been challenged in federal court. If it survives, it would reduce the counts in areas where foreign-born populations have traditionally settled — primarily Democrat-run cities — and therefore undermine their political power relative to more rural, Republican-run areas. But it could also impact red states with large immigrant populations, including Texas.

But that’s not all Trump has done with the census. In June, he added two new political appointees to the Census Bureau, drawing speculation from Democrats that he was trying to use the census to pursue partisan goals.

Nathaniel Cogley, a former political science professor, assumed the newly created position of deputy director for policy, and Adam Korzeniewski — a former political consultant for the YouTube personality “Joey Salads,” who is known for creating racist pranks — became his senior adviser. The scope and authority of their positions remain unclear, but Democrats have raised concern that they may have undue influence over how the 2020 census is administered.

“The decision to create two new senior positions at the Census Bureau and fill them with political operatives is yet another unprecedented attempt by the Trump Administration to politicize the 2020 census,” Rep. Carolyn Maloney, the chair of the House Oversight and Reform Committee, said in June.

The debate around putting an end to all government shutdowns, explained
No, Trump hasn’t been the best president for Black America since Lincoln
SNL cold open: Matthew Broderick plays Mike Pompeo navigating a news-heavy impeachment inquiry
The Supreme Court just quietly gutted antitrust law
Tote bags, water bottles, mailing labels: Why non-profits give away so much crap
The killing of Daniel Prude, explained