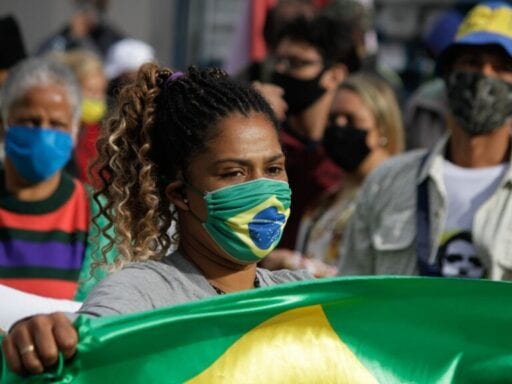 Share
Loading...
Supporters of the president of Brazil, Jair Bolsonaro, protest against the governor of the state of Sao Paulo, Joao Doria, on Avenida Paulista, in the central region of the city of Sao Paulo, on May 24, 2020.  | Fabio Vieira/FotoRua/NurPhoto via Getty Images

The country’s death toll is climbing as its president resists shutting down the economy.

In an effort to stem the spread of the novel coronavirus, President Donald Trump will soon ban travelers coming from the latest hotspot: Brazil.

Any noncitizen who has been in Brazil within the last 14 days will be turned away starting Tuesday at 11:59 p.m. Trump had initially said the ban wouldn’t go into effect until Thursday but then moved up the effective date.

Brazil has the highest daily Covid-19 death rate worldwide and could see deaths increase fivefold by August to 125,000. President Jair Bolsonaro, who has prioritized keeping businesses open against the advice of his health ministers and described the virus as just a “little flu” has yet to implement shutdown measures in order to slow the rate of infection.

“Today’s action will help ensure foreign nationals who have been in Brazil do not become a source of additional infections in our country,” White House Press Secretary Kayleigh McEnany told reporters on Sunday. “These new restrictions do not apply to the flow of commerce between the United States and Brazil.”

Trump told reporters on May 19 that while he didn’t want Brazilians “coming in here and infecting our people,” he has ensured that the administration is sending thousands of ventilators to the country, whose health system has buckled as it faces almost 400,000 confirmed coronavirus cases. The country’s underfunded hospitals are ill-equipped to care for the many Brazilians living in poverty should they be infected, as my colleague Alex Ward writes.

But while Trump has been publicly sympathetic to the people of Brazil and their president, his longtime ally, the governor of Sao Paulo said that Brazil’s “diplomatic and economic relationship with the US will be affected by Mr. Trump’s decision” to restrict travel.

Brazil is one of many countries facing travel restrictions

Brazil is just the latest country to face travel restrictions in the US.

In January, Trump blocked foreigners who had recently visited China and in February, he imposed additional restrictions on Iranians, many of whom were already subject to a travel ban unrelated to coronavirus. In March, Trump began barring entry for all travelers from Europe, including the UK and Ireland. US citizens who were visiting these countries, however, were exempt, meaning that they could have imported coronavirus without detection.

Trump is also reportedly weighing a travel ban on Russia, which has the third-highest number of confirmed coronavirus cases.

Though these bans may have prevented some transmission of coronavirus, they have come at a great socioeconomic cost for the countries affected.

“China’s economy is taking a huge hit, with a ripple effect felt around the world,” Nicole Errett, lecturer in the University of Washington Department of Environmental and Occupational Health Science, said. “Airports and borders are closed, supply chains are interrupted, businesses are shuttered. Health and health systems are also affected, as it becomes difficult to transport health care workers and resources where they are needed, and people avoid or can’t access routine health care services.”

While Trump has repeatedly cited these bans as key policies in his response to the virus, researchers are still learning about how travel bans can curb the spread of coronavirus. Since Trump imposed his initial travel restrictions on people coming from China at the outset of the pandemic, they now have a better understanding of the circumstances under which restrictions might be effective.

New Zealand, which brought the number of daily new coronavirus cases down to zero, and Australia, which has just over 7,000 cases, have both enacted strict lockdowns and sent overseas travelers to mandatory 14-day quarantine upon arrival.

China and Italy, on the other hand, both adopted stringent restrictions on domestic and international travel but were unable to avert a pandemic.

China’s decision to lock down domestic transportation in the Hubei province, where the virus originated, coupled with international travel restrictions, led to a delay both in the spread of the virus internally and in other countries — one paper estimates by about 2.9 days. Another paper recently published in Science that has yet to be peer-reviewed determined that the combination of those approaches produced a “much larger synergistic effect” than either of them would have alone.

It’s not yet clear whether travel restrictions in Italy had a similar impact. Italy was the first European Union country to ban flights to and from China on account of coronavirus, going against the recommendations of the World Health Organization.

Joshua Michaud, associate director for global health policy at the Kaiser Family Foundation, said that these case studies show that travel restrictions can prevent the spread of the virus if placed early enough and if they’re stringent enough.

“The difficulty with this virus is that, if it’s not early enough, it may not have the intended effect,” he said. “If you have an incomplete travel ban or it comes too late, it doesn’t help very much. It’s like pulling the fire alarm when the house is on fire.”

The US’s initial ban on Chinese travelers didn’t cover all people coming from China because they could re-route through other countries and get around the ban. What’s more, the virus had already reached the US undetected, mostly coming from Europe.

At this point, community transmission within the US is so high that further travel restrictions will likely have a comparatively marginal effect — but they will prevent at least some transmission. Whether preventing that transmission is worth the obvious diplomatic and socioeconomic costs of shutting down travel is still an open question.