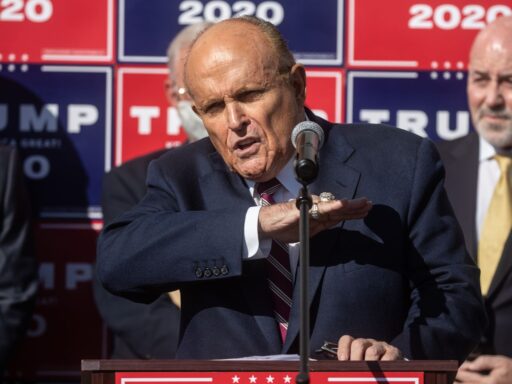 Republican officials aren’t just losing. They are embarrassing themselves.

On Tuesday, former New York Mayor and Trump consigliere Rudy Giuliani made his first appearance as a lawyer in federal court since 1992. It did not go well. As election law professor Rick Hasen tweeted during the hearing, “I’ve never seen worse lawyering in an election law case in my life.”

Giuliani, who served as the lead federal prosecutor in Manhattan for much of the 1980s, was once a very distinguished attorney. But there are good reasons why a lawyer who hasn’t litigated a federal case in nearly three decades should be cautious about trying to relive their glory days. The Federal Rules of Civil Procedure are 140 pages long and full of traps for the unwary or the out-of-practice. Giuliani appeared unaware of important provisions of these rules — such as a one detailing what lawyers must do if they raise an allegation of fraud.

Indeed, at several points in the hearing, Giuliani appeared unfamiliar with basic legal concepts that would be familiar to any undergraduate who has taken a semester of constitutional law. “Maybe I don’t understand what you mean by ‘strict scrutiny,’” Giuliani admitted to Judge Matthew Brann at one point in the hearing.

(“Strict scrutiny” is the highly skeptical test courts apply to many government actions that are disfavored by the Constitution, such as actions that discriminate on the basis of race. It’s one of the foundational concepts taught to every law student in their introduction to constitutional law.)

Giuliani was in Brann’s courtroom after several of the Trump campaign’s lawyers abruptly withdrew from the case, Donald J. Trump for President v. Boockvar, which seeks to prevent Pennsylvania from certifying President-elect Joe Biden’s victory in that state. And, while Giuliani’s performance in the Boockvar case was unusually clownish, it was hardly out of line with the Trump campaign’s overall record in its many lawsuits attacking an election that Trump lost.

According to Marc Elias, the Democratic superlawyer who oversees much of his party’s litigation strategy, Trump and his allied litigants have won just one of the 31 post-election cases that have already been resolved. (Their one victory was a minor court order holding that certain voters, whose ballots were rejected in Pennsylvania, have six days to cure the errors that led to the ballots’ rejection instead of nine.)

Indeed, some reporting suggests that the purpose of these lawsuits isn’t actually to win in court. It’s to create enough of an impression that there is legal uncertainty regarding the winner of the presidential election that Republican lawmakers will then feel pressured to steal the election for Trump.

A “senior Trump campaign official” told Reuters that the campaign hopes Republican lawmakers in states like Michigan, Pennsylvania, and Wisconsin “will face a backlash from voters” unless those lawmakers pass legislation tossing out the result of the election. It’s unclear whether state lawmakers have the legal authority to do so, especially if the legislation were vetoed by a Democratic governor, and such a move to depose a lawfully elected president would undoubtedly spark a constitutional crisis — and potentially civil unrest.

Shortly after Election Day, Trump’s campaign and his allies filed a series of lawsuits that seemed to have more to do with creating the impression that there’s legal uncertainty about the election than with actually changing the result. Most of these suits involved small-potatoes claims that, even if they were resolved in Trump’s favor, were unlikely to have more than a negligible impact on the election.

Many, though not all, of the GOP’s and the Trump campaign’s lawsuits fit into two categories.

As an example of the first kind of case, a Georgia poll watcher claimed that he saw an election worker place a stack of 53 ballots on a table. The poll worker then left the room, and when he came back, the stack of ballots was gone.

Biden leads Trump by more than 12,000 votes in Georgia. So even if there weren’t any number of perfectly lawful explanations for why a short stack of ballots was moved, this Georgia lawsuit wouldn’t change the outcome of the election even if Trump had prevailed in court — and he did not.

Meanwhile, one of the Trump campaign’s most common complaints is that its poll watchers are not allowed to stand closer to the election workers who counted ballots. The Supreme Court of Pennsylvania, for example, recently rejected a Trump campaign lawsuit alleging that the state violated the law by requiring poll watchers to remain at least 15 feet away from ballot counters.

But even if Trump had prevailed in this Pennsylvania case, it’s unclear what he could have done with that victory. The proper remedy, if Trump’s poll watchers aren’t being allowed to stand close enough to election workers, is to let them stand closer to election workers. At most, Trump might have secured a court order requiring some ballots to be recounted with poll watchers in close proximity.

Such an order would do nothing to change the fact that, according to current tallies, Biden won 80,000 more votes than Trump in the state of Pennsylvania.

Shortly after the election, a conspiracy theory emerged in some of the Trumpiest corners of Facebook and Twitter alleging that a company that supplies voting machines to 28 states is somehow in league with the Democratic Party.

The conspiracy theory emerged after a clerical error briefly assigned some votes in a conservative Michigan county to Biden that were actually cast for Trump. The error was swiftly caught, and the votes were properly tallied.

Though election officials say the real cause of this mistake was human error, tens of thousands of social media users amplified an unsubstantiated theory attributing the error to Dominion Voting Systems, a company that supplies voting machines to Michigan. Many of these conspiracy theorists pointed to Dominion’s loose ties with prominent Democratic politicians. Dominion, for example, employs a lobbyist who used to work for Democratic House Speaker Nancy Pelosi. (It should be noted that Dominion also employs Republican lobbyists, including one who worked for Republican former Speaker John Boehner.) The company also donated some of its election machines to the Clinton Global Initiative in 2014 as part of a project to shore up emerging democracies.

Dominion-ghazi is the kind of speculative nonsense that frequently bubbles up in paranoid corners of sites like Twitter and that is rarely noticed by many people outside of that bubble. And yet, this particular unsubstantiated conspiracy theory plays a major role in Donald J. Trump for President v. Benson, a case that tried to prevent Michigan from certifying its election results. Here is an actual paragraph from the complaint in Benson:

On the morning of November 4, unofficial results posted by the Antrim County Clerk showed that Joe Biden had over 7,700 votes — 3,000 more than Donald Trump. Antrim County voted 62% in favor of President Trump in 2016. The Dominion Voting Systems election management system and voting machines (tabulators), which were used in Antrim County, are also used in many other Michigan counties, including Wayne County, were at fault.

The Trump campaign asked a federal court to prohibit the state from counting “ballots tabulated using the Dominion tabulating equipment or software without the accuracy of individual tabulators having first been determined.”

In Benson, the Trump campaign also claimed that election workers manipulated the ballot-counting process, based on barely relevant accusations from poll watchers. One Trump poll watcher, for example, said, “I witnessed election workers open ballots with Donald Trump votes and respond by rolling their eyes and showing it to other poll workers. I believe some of these ballots may not have been properly counted.”

In any event, the Trump campaign abruptly filed to dismiss the Benson case on Thursday. Amusingly, the document dismissing the case claims that “the Wayne County board of county canvassers met and declined to certify the results of the presidential election.” In reality, Republicans on the Wayne County board did briefly vote on Tuesday to block certification of votes in that county, which includes the Democratic stronghold of Detroit, but they swiftly backed down due to public outcry and voted to certify.

(Thursday brought a new twist: The two Republicans on this board tried to rescind their votes certifying Wayne County’s results after at least one board member received a call from President Trump. According to the state Bureau of Elections, there is no legal mechanism for a county board member to reverse their vote at this late stage.)

Meanwhile, the Boockvar case in Pennsylvania remains ongoing, but that case largely turns on unsubstantiated allegations and absurd demands. In a document filed Wednesday evening, for example, the Trump campaign claims that Pennsylvania election officials “deliberately excluded Republican/Trump observers from the canvassing in order to facilitate counting mail ballots which did not comport with the signature, date, and other requirements of Pennsylvania law,” and that these officials did so to “favor Biden over Trump.”

The campaign demands that Pennsylvania turn over the envelopes used to submit about 1.5 million ballots in that state or “a significant random sample from each county.” The Trump campaign then claims that it will use these envelopes to “determine the percentage of mail ballots which were illegally counted.” And if the Trump campaign determines that Trump should have won the election, then the court “should set aside these votes and declare Trump the winner.”

I can’t believe that I even have to write this next sentence. But courts typically do not resolve election disputes by allowing one of the campaigns to determine who won the election.

As I write these words, Giuliani is speaking at a press conference at the Republican National Committee’s headquarters, where he claims — again, without evidence — that officials in 10 “crooked cities” are engaged in a “national conspiracy” to rig the election for Joe Biden. “You would have to be a fool not to realize that!” an angry Giuliani told reporters, before claiming that he divined this conspiracy by “just using logic.”

The mere idea that Trump appears to have assembled his legal team from characters on The Benny Hill Show should not detract the public from what Trump is trying to accomplish. As my colleague Ezra Klein has written, Trump “is attempting a coup in plain sight.” He lost an election, and now he’s filling the courts with meritless lawsuits in the hope that he’ll find a sufficiently partisan judge who is willing to steal the presidency from President-elect Biden. And if that doesn’t work, maybe he can create an alternative reality in the minds of state lawmakers that will convince them to steal the election for Trump.

But that doesn’t change the fact that Trump’s entire litigation strategy is likely to collapse under the weight of its utter incompetence.