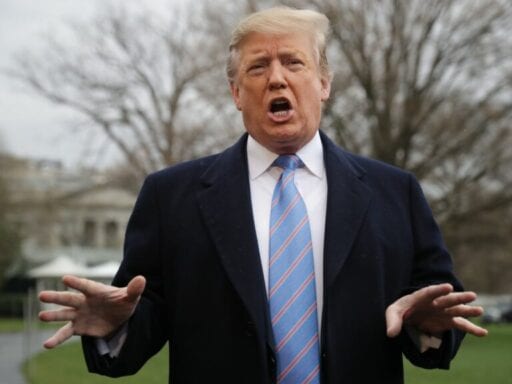 It’s the beginning of what may become a drawn out legal battle.

For more than four years, President Donald Trump has refused to release his federal income tax returns. Friday, his attorney said the president plans to continue doing so, despite pressure from House Democrats to make the returns public.

In a letter to the Treasury Department, Trump’s attorney William Consovoy called on the Internal Revenue Service (IRS) to reject a request from the House Ways and Means Committee to release the president’s personal and business tax returns.

“It would be a gross abuse of power for the majority party to use tax returns as a weapon to attack, harass, and intimidate their political opponents,” Consovoy wrote on Friday. “Once this Pandora’s box is opened, the ensuing tit-for-tat will do lasting damage to our nation.”

Rep. Richard Neal (D-MA), who chairs the House Ways and Means Committee, demanded Trump’s returns on Wednesday, following months of a slow and meticulous start to a number of investigations into the Trump White House by Democrats newly in control of the House of Representatives.

Neal wants six years worth of Trump’s personal federal income tax returns and returns for business entities tied to his name, spanning 2013 through 2018. The chairman set an April 10 deadline for returns’ release.

The president’s legal team made clear this week that it has every intention to fight House Democrats tooth and nail over the issue. The team has already indicated a willingness to bring the issue all the way to the Supreme Court.

Trump defied decades of precedent in refusing to release his returns — every modern presidential party nominee has made their tax returns public at one point or another. The president has justified his refusal to follow suit, but his justifications keep changing.

Over the course of his 2016 presidential campaign, Trump waffled over whether he’d actually make his returns available to the public. Before formally announcing his campaign, Trump promised conservative radio host Hugh Hewitt he would release his returns should he run for president. The president then punted on the issue after he formally declared his candidacy months later, saying in August 2015 that he’d release them “at some point.”

Trump teased of a big tax return reveal during the Republican primary season. But as Vox’s Andrew Prokop notes, Trump’s storyline started to shift around the time he edged closer to clinching the party’s nomination. Trump began arguing that he was barred from releasing his returns because he was being audited by the IRS. Only after the audit was finished would he be able to make the returns public, he claimed.

Tax experts throughout the media agree that no sane person would give their tax returns during an audit. After the audit, no problem!

Tax experts, including at the IRS, debunked these claims as bogus. Nevertheless, it’s a justification Trump continues to use today. “Until such time as I am not under audit, I will not be doing that, thank you,” Trump said this week, according to Politico.

House Democrats are now trying to use the audit process against the president. They’re using a somewhat novel approach, working to obtain Trump’s returns by checking on whether the IRS is properly auditing his taxes.

In a letter to the IRS Commissioner Charles Rettig on Wednesday, Neal wrote that although the agency has historically audited the tax returns of sitting presidents and vice presidents, little is known about the process. The chairman argued the House needed the returns in order to fulfill Congress’ duty in conducting “oversight of departments and officials.”

Trump’s legal team responded by calling on the Justice Department to weigh in; it also asked the Treasury Department to deny Neal’s request until the DOJ submits a formal legal opinion.

As New York Times reporter Maggie Haberman points out, central to the attorneys’ argument is a claim that Trump is both a regular citizen and sitting president. On one hand, they argue he is a private citizen and that Neal’s committee has “no power to conduct its own examination of the individual taxpayers.” On the other hand, Trump has used his authority as president to fill federal agencies with political appointees, including Rettig.

As Vox’s Emily Stewart reports, before he led the IRS, Rettig said he wouldn’t advise Trump to release his returns while being audited. “Would any experienced tax lawyer representing Trump in an IRS audit advise him to publicly release his tax returns during the audit? Absolutely not,” Rettig said in 2016.

Trump lawyers have consistently elevated the concept of his rights as a private citizen when critics have raised questions about aspects of his conduct in office. Most extreme example of him trying to be two things at once. https://t.co/BtvbWdhatO

The almost certain impending legal battle over the president’s tax returns will likely stretch out for months, meaning there is a high chance that even if Democrats do get their hands on them, it won’t be until after the 2020 presidential election.

Trump has been able to stall on releasing his returns for this long — odds are, even with House Democrats turning up the pressure, this won’t be his last stand.

James Gunn’s firing shows we’re still living in the Gamergate era
Barack Obama’s crucial insight into the crisis of American democracy
What it takes to get an abortion during the coronavirus pandemic
Joe Biden wins the Illinois primary
Will luxury towers edge out the last of the working-class Chinese in New York’s iconic Chinatown?
4/20 in the age of coronavirus, explained