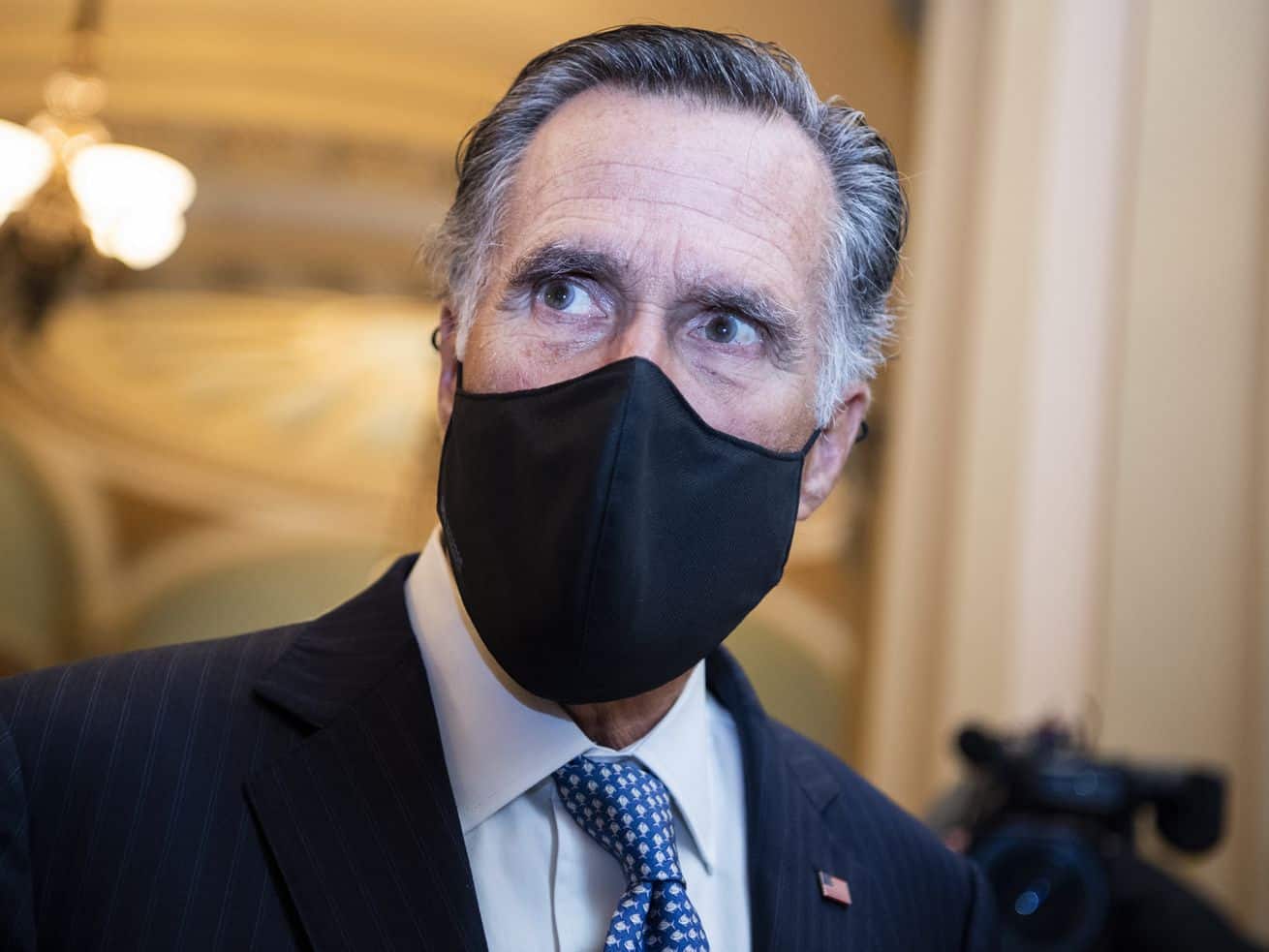 For instance, they would not give new specifics on how Trump responded to the Capitol breach.

Key Republican senators on the fence about the verdict in Donald Trump’s second impeachment trial had some specific factual questions for Trump’s lawyers about his actions on the day the US Capitol was stormed.

Trump’s attorneys did not come close to answering them.

During a period of the impeachment trial in which senators could submit written questions to either side’s legal team Friday afternoon, Sens. Susan Collins (R-ME), Lisa Murkowski (R-AK), Mitt Romney (R-UT), and Bill Cassidy (R-LA) all wanted to know more about why, exactly, it took so long for Trump to mobilize the federal government to stop the mob, and how the president responded to the situation as it was unfolding.

Michael van der Veen, an attorney for Trump, gave them nothing. All he could cite were the tweets issued by Trump publicly at the time. But this wasn’t his fault, he said — it’s the fault of the House, for not doing a sufficient investigation.

“There’s nothing at all on the record on this point. Because the House failed to do even a minimal amount of due diligence,” van der Veen said, while batting away one question on the topic.

“With the rush to bring this impeachment there’s been no investigation into that. And that’s the problem with this entire proceeding,” he said in response to another.

To be clear, van der Veen and his fellow attorneys could have voluntarily offered new exculpatory evidence — about how Trump responded to the January 6 riot or other related topics — as part of their defense for the former president. They didn’t.

But what we do know of Trump’s conduct that day from reporting is not flattering. Sources have told journalists, for instance at the Washington Post, that he was watching the chaos closely on television and resisting some advisers’ pleas that he should condemn the violence. Sen. Ben Sasse (R-NE) has claimed White House aides told him Trump was “delighted” as the Capitol was stormed. And Friday night, CNN reported that Trump had spurned House Minority Leader Kevin McCarthy’s pleas to condemn the rioters, saying, “Well Kevin, I guess these people are more upset about the election than you are.”

Yet Trump’s team correctly pointed out that, so far, Democrats have made a strategic choice not to pursue sworn testimony from Trump’s aides as part of this inquiry. That means on-the-record statements about what Trump did from people with firsthand knowledge are few and far between.

It’s unclear if sworn witness testimony would have much of an impact on Republican senators’ votes on a verdict (17 would be necessary to convict Trump, and far fewer currently seem open to it). Note also that McCarthy voted against impeachment even though he obviously knew what Trump had said to him on January 6. But the lack of witness testimony does mean the Republicans who are considering convicting have less to go on.

Key Republican senators had questions. They didn’t get answers.

The first skeptical Republican question, from Sens. Collins and Murkowski, was: “Exactly when did President Trump learn of the breach of the Capitol? What specific actions did he take to bring the rioting to the end and when did he take them? Please be as detailed as possible.”

Van der Veen’s response was not detailed. “We have a tweet at 2:38, so it was certainly sometime before then,” he said. (At 2:38 pm, Trump sent a tweet reading: “Please support our Capitol Police and Law Enforcement. They are truly on the side of our Country. Stay peaceful!”)

But van der Veen couldn’t offer anything more, and he tried to blame the House impeachment managers for that failure. “The House managers did zero investigation and the American people deserve a lot better than coming in here with no evidence, hearsay on top of hearsay on top of reports that are of hearsay,” he said.

Later, Sens. Romney and Collins asked another question intended to suss out when Trump learned Vice President Mike Pence could have been in physical danger.

The background here is that Sen. Tommy Tuberville (R-AL) has publicly stated that, after protesters had already gotten inside the Capitol building, he spoke to Trump on the phone. (Trump was trying to get Tuberville to slow down the count of the electoral votes.) Per Tuberville’s recounting to Politico, he had to cut the call short, and he told Trump, “Mr. President, they just took the vice president out, I’ve got to go.”

The Secret Service had evacuated Pence from the Senate chamber at 2:15 pm, so this exchange between Tuberville and Trump likely took place around that time. Then, at 2:24 pm, Trump sent this tweet disparaging Pence:

Mike Pence didn’t have the courage to do what should have been done to protect our Country and our Constitution, giving States a chance to certify a corrected set of facts, not the fraudulent or inaccurate ones which they were asked to previously certify. USA demands the truth!

So Romney and Collins asked, when Trump sent that tweet, was he in fact aware that the “the vice president had been removed from the Senate by the Secret Service for his safety?”

Van der Veen claimed that “the answer is no,” and that “at no point was the president informed the vice president was in any danger.” But he didn’t give any explanation of how the apparent timeline outlined above was wrong, and just pivoted to arguing that “the House rushed through this impeachment in seven days with no evidence.”

Van der Veen returned to his same talking point. “I dispute the premise of your facts. I dispute the facts that are laid out in that question. And unfortunately we are not going to know the answer to those facts in this proceeding, because the House did nothing to investigate what went on.”

But, van der Veen continued, “Mr. Trump and Mr. Pence have had a very good relationship for a long time and I’m sure Mr. Trump very much is concerned and was concerned for the safety and well-being of Mr. Pence and everybody else that was over here.”

The Washington Post’s Josh Dawsey soon tweeted that anonymous Pence aides do “not agree” with that assessment:

Pence’s team does not agree with the Trump lawyer’s assessment that Trump was concerned about Pence’s safety. Trump didn’t call him that day — or for five days after that. No one else on Trump’s team called as Pence was evacuated to one room & another, with screaming mob nearby.

Tuberville also reiterated his account of his phone call with Trump to reporters Friday afternoon.

Still, on-the-record statements about Trump’s private behavior and actions as the Capitol was stormed remain elusive — because the people with him at the time were hardcore loyalists. According to the Washington Post:

[President Trump] spent the afternoon and evening cocooned at the White House and listening only to a small coterie of loyal aides — including Meadows, deputy chief of staff Dan Scavino, personnel director Johnny McEntee and policy adviser Stephen Miller. Many of his top confidants — Meadows, son-in-law Jared Kushner and first lady Melania Trump, among others — were publicly silent.

If you wanted to make a shortlist of people who would be least likely to provide harmful information about Donald Trump, Meadows, McEntee, Scavino, and Miller would be near the top of that list, perhaps just under Trump’s own children. The latter three are longstanding aides who still see their professional fortunes as linked to the president; Meadows, who joined the administration more recently, was reportedly considering taking a job in the Trump organization.

These aides would also likely wage a court battle against any subpoena compelling their testimony. Former White House counsel Don McGahn has already been doing this in response to a 2019 subpoena, and he has successfully evaded providing any testimony so far.

And even if damning new information did emerge about Trump’s private behavior on January 6, more than enough Republican senators to acquit Trump have already embraced the argument that it’s unconstitutional for the Senate to try a former president — making the specific facts apparently irrelevant.

Carbon offsets, explained in 500 words
Read: Top State Department official’s testimony outlining Trump’s Ukraine quid pro quo
Congress passed a short-term funding bill, giving itself two more days to negotiate stimulus
How to guard your social feeds against election misinformation
In 2020, both parties won over millions of new voters. Here are some of them.
Amazon may soon face an antitrust probe. Here are 3 questions the FTC is asking about it.