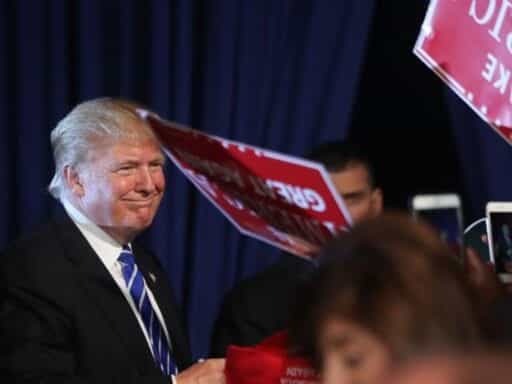 The GOP has a real tax cut for the rich, paid for by health care cuts.

Let’s be clear: President Donald Trump is saying he has a plan for a middle-class tax cut, but there is no such plan. He is just making it up. And there is not going to be any such plan, either, however much congressional Republicans may be spending this week pretending to get on board with the president’s idea.

We know this because Trump and the GOP have an actual tax bill that is not only written but has already passed the House of Representatives. If Republicans hold the House in November, they will pass this real tax bill again. And if they gain seats in the United States Senate, they will stand a chance of passing it there, too. The real tax bill is not a middle-class tax cut — it’s a huge windfall for the rich, just like every other tax bill Republicans have written for the past 30 years.

There is a kind of entertaining randomness to the things Trump says and does. The president decides it would be smart to start pretending that he’s working on a middle-class tax cut, so he just blurts it out with no preparation. Everyone else in the Republican Party politics knows that when Trump starts lying about something, their job is to start covering for him.

But because Trump is disorganized, and most people aren’t as shameless as Trump is, it usually takes a few days for the ducks to get in a row. The ensuing chaos is kind of funny.

But there’s actually nothing funny about tricking millions of people about matters with substantial concrete consequences for them and their families. And that’s what’s happening here. Trump is lying about taxes — and about health care and many other things — because he will benefit personally in concrete ways if the electorate is misinformed about the real stakes in the election.

Republicans already have a tax plan in the works

Regardless of all the coverage Trump’s nonsense about a middle-class tax cut has attracted this week, Republicans already have a tax policy agenda for 2019.

It’s a package of legislation that passed the House of Representatives earlier this fall called Tax Reform 2.0, and while does deliver a modest tax cut to the middle class, it’s also a huge tax cut for millionaires and billionaires.

If enacted, this tax law would cause the budget deficit to increase by roughly $2 trillion. This idea was dead on arrival in the US Senate, where Republicans currently enjoy a razor-thin majority. Midterms results may change that.

How will that $2 trillion in lost revenue be offset? Well, Republicans have said that if they do well in the midterms they will take another stab at repealing the Affordable Care Act. Previous iterations of ACA repeal not only eliminating the preexisting conditions protections that Republicans now pretend to favor, but enacted huge long-term cuts in Medicaid. Those cuts, if enacted, would create plenty of budgetary headroom for Tax Reform 2.0.

That’s what Republicans are planning if they win: a big tax cut mostly for rich people, paid for by cutting a health insurance program for the poor, the disabled, and the middle-class elderly. These ideas are not the central themes of the Republican Party’s 2018 midterm campaign, but they are the central ideas of the Republican Party’s 2019 governing agenda. People deserve to have accurate information about them.

Much of the 2014 campaign season was fought on the basis of hazy fears about ISIS and Ebola, but the actual consequences of Republicans’ Senate gains had to do with judicial confirmations.

By the same token, even though much of the campaign discourse this week is about “the caravan,” a space force, and a fake middle-class tax cut, none of those are issues where the policy outcomes are going to shift dramatically based on what happens in November.

On taxes and health care, by contrast, there are very real tangible consequences at stake. House Republicans have some big policy ideas — primarily a large regressive tax cut paid for by cuts to Medicaid — that they have been unable to get the Senate to go along with. If Republicans pick up a Senate seat or three, that may change a lot of people’s lives dramatically.

Donald Trump doesn’t want people to understand those tangible consequences — he thinks that if people do understand it, they won’t vote for his allies.

What to expect at the September Democratic debate
Trump doesn’t need to jail families to enforce immigration laws. There are better options.
Big oil and Bush-era lobbyists are teaming up to support a carbon tax
Armed protesters entered Michigan’s state capitol during rally against stay-at-home order
Support for Trump’s impeachment is nearing Nixon’s levels during Watergate
Utah’s “conversion therapy” ban is a major tipping point for LGBTQ rights