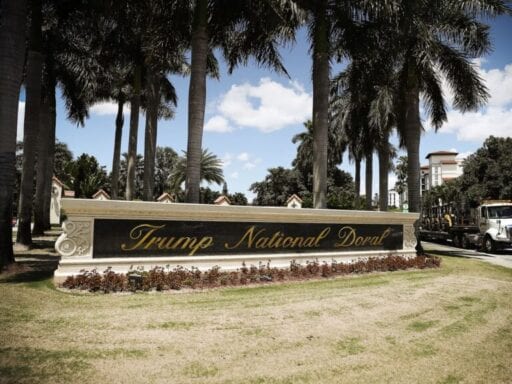 The corruption is becoming more and more brazen.

In one of the starkest examples of how the Trump administration is normalizing the sort of self-dealing that would have been unfathomable in previous eras, acting Chief of Staff Mick Mulvaney announced on Thursday that next June’s G7 summit will be held at a resort that President Donald Trump still owns and profits from in Doral, Florida.

During a news conference, Mulvaney portrayed the decision as one based on holding the event at the best facility possible. But there are plenty of other suitable venues that the president doesn’t profit from — such as Camp David in Maryland, which hosted the G7 the last time it was in the US in 2012 — and there’s no denying that turning one of the world’s foremost annual gatherings of leaders into a free infomercial for Trump’s resort represents a major branding opportunity.

Tellingly, Mulvaney himself didn’t even try to deny that. Instead, he argued that Trump is too rich and successful to care about branding opportunities since his “brand is probably strong enough as it is.”

Trump “doesn’t need any more help on that,” Mulvaney added, alluding to the free promotion the G7 will provide. “It is the most recognizable name in the English language and probably around the world.”

That Trump’s name is one of the most well-known in the English language might arguably be true — but “Trump National Doral Miami” is less so. And beyond the branding opportunity, it’s also a financial one, especially seeing as how Doral’s net operating income has declined by nearly 70 percent since 2015.

Mulvaney promoted Trump Doral from behind the White House briefing podium as “far and away the best physical facility for this meeting” and “perfect for our needs.”

The move perhaps isn’t surprising, given Trump’s willingness to break decades of precedent by refusing to divest from his business interests when he took office. And Trump has used the guise of diplomacy to promote his businesses before. He’s hosted Chinese President Xi Jinping at his Mar-a-Lago resort and has repeatedly hosted Japanese Prime Minister Abe Shinzo there as well. Those summits served as textbook examples of corruption, but hosting the G7 at a resort that Trump has described in federal disclosures as one of his biggest moneymakers takes things up a notch.

While it’s on brand, Trump’s decision to have the next G7 meeting in a place where the US government and international governments would be forced to patronize his business is perhaps the starkest illustration yet of how he’s thumbing his nose not just at tradition and ethical standards but also the Constitution’s emoluments clause, a little-used provision aimed at guarding corruption of presidents by foreign interests. Mulvaney, however, dismissed concerns that Trump’s conflicts of interest are a bad look by insisting he “got over that a long time ago.”

Trump first floated the idea of hosting the 2020 G7 at Trump Doral in August. Since then, he’s ignored his own corruption and gone to desperate lengths to portray one of the frontrunners for the 2020 Democratic nomination for president, former Vice President Joe Biden, as acting corruptly to help his son enrich himself with a job on the board of a Ukrainian energy company. But there’s no evidence that Biden did anything wrong, and Trump’s unusual efforts to cajole the new Ukrainian government to conduct politically beneficial investigations for him has prompted an impeachment inquiry. None of that, however, resulted in Trump feeling sufficient shame to decide against having the G7 at his resort.

In a statement released after Mulvaney’s news conference, Citizens for Responsibility and Ethics in Washington (CREW) Executive Director Noah Bookbinder characterized the move as “unbelievable” and proof “the American government is being used as a public relations and marketing subsidiary of the Trump Organization.

“Given the potential consequences the president is facing for abusing the presidency for his own gain, we would have thought he would steer clear of blatant corruption at least temporarily; instead he has doubled down on it,” Bookbinder said. “The president is now officially using the power of his office to help prop up his struggling golf business. There appears to be no bottom to President Trump’s corruption.”

While turning the G7 into a commercial for his business obviously has its upsides for Trump, it will also serve as perhaps the starkest illustration yet of his willingness to profit off his office, just a month ahead of the 2020 Democratic National Convention. And on Thursday, Democratic members of Congress wasted no time blasting Mulvaney’s announcement as, among other things, a violation of the emoluments clause and a mechanism for Trump to funnel taxpayer dollars into his own pockets.

Fox News, however, got busy normalizing it.

Fox News calls Trump awarding the G7 to his own resort as “Home Field Advantage” pic.twitter.com/nVfPxtpDFI

A number of Republican senators also didn’t seem overly bothered by Trump’s decision, ranging from South Dakota’s Mike Rounds (“show me where there is a violation of law,” he said, according to the HuffPost) to Florida’s Marco Rubio (“anything that draws a major event like that to Florida is not something I would discourage”).

Essential pandemic workers still don’t have enough masks and gloves
The summer solstice is here: 6 things to know about the longest day of the year
The only thing that can protect you from your gadgets is more gadgets
Trump’s weak arguments against impeachment trial witnesses, explained
4 winners and 3 losers on Super Tuesday
Watch: Nancy Pelosi fires back at reporter who asked if she hates Trump