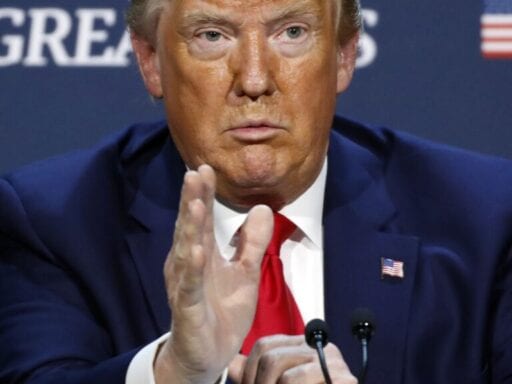 The president spoke in broad strokes and about “falsely labeling” police as “racists or bigots.”

At a roundtable in Dallas on Thursday, while calling for “law and order,” President Donald Trump announced his vision for “safety, opportunity, and dignity.” However, his limited proposals skirted action around police reform, which has become a major activist demand as protesters nationwide demonstrate against racism and the police killing of black people.

Trump met with community and faith leaders at Gateway Church to unveil the four steps of his revitalization plan: fostering economic development in minority communities by increasing access to capital for business owners; addressing racial health care disparities; getting police departments to meet use of force standards by executive order; and expanding access to education by pushing Congress to enact school choice.

During a moment of widespread protest against police power — millions around the world have been demonstrating against police violence for weeks — Trump made it clear that he would not support major police reform proposals and mocked efforts to defund the police. “Unfortunately, there’s some trying to stoke division and to push an extreme agenda — which we won’t go for — that will produce only more poverty, more crime, more suffering. This includes radical efforts to defund, dismantle, and disband the police,” he said.

Trump added that he’d in fact go in the opposite direction of defunding law enforcement to ensure that police have the best equipment. Police officers should be able to use “force, but force with compassion,” and “dominate the streets,” he said. He did not mention the name of George Floyd, the black man who was killed in May when a police officer pinned him by the neck with his knee for nearly nine minutes, setting off weeks of international unrest.

Trump’s executive order would merely push police departments to adopt the most current forms of use of force standards and deescalation, embrace more police training, and roll out pilot programs that partner social workers with law enforcement officials.

“We’ll make no progress and heal no wounds by falsely labeling tens of millions of decent Americans as racists or bigots,” Trump said of police, who operate in a criminal justice system that enforces systemic racism. This week, the administration declined on various occasions to acknowledge how systemic racism is baked into America’s policies and regulations. In one such instance, Trump economic adviser Larry Kudlow denied its existence.

Trump did not detail exactly how he would get police to meet use of force standards. Meanwhile, cities across the country are reviewing how to rework police departments through budget changes or complete disbandment. Congressional Democrats also unveiled a sweeping police reform bill on June 8 that seeks to end qualified immunity and chokeholds across the board.

Trump gave few details on the other proposals as well, instead making vague commentary on various institutions. He claimed that his administration is aggressively pursuing economic development, and said moving capital into black communities “should’ve been done a long time ago. It’s been unfairly difficult for some people,” he said. On health disparities, he said that medical centers in some parts of the country “are a disgrace.” On school choice, he said “access to education is the civil rights issue of our time” and that his latest proposal would build on his administration’s earlier school voucher plans.

Trump touted his administration’s efforts on criminal justice reform, support for historically black colleges and universities, and the black unemployment rate, which he said was the lowest in history before the coronavirus pandemic hit. “We’ll get it back again soon,” he said. The overall unemployment rate dropped in May but rose slightly for black Americans, likely a result of the administration’s botched response to a pandemic that is disproportionately affecting black communities.

From the beginning of the pandemic, Trump’s administration has released misleading information about the virus and tried to avoid responsibility. And now with protests against racism continuing across the country, the administration’s response is the same: a denial on the ills of policing and the failure to hold itself accountable.