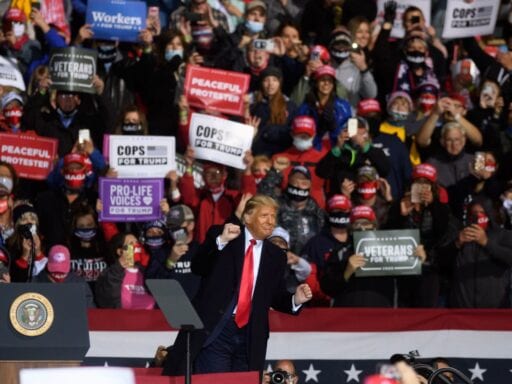 With his personal bout with the coronavirus apparently in the rearview mirror, President Donald Trump is now taking his show on the road for near-nightly political rallies that make a mockery of public health guidelines calling for social distancing and universal mask-wearing during the ongoing pandemic.

If the public health risk these events create isn’t enough to alienate undecided voters who happen to be tuning in, Trump’s Tuesday evening performance in Johnstown, Pennsylvania, provided a few examples of how the content seems unlikely to sway swing voters either.

Three weeks out from Election Day, Trump is largely playing his greatest hits — attacking the media, defending the Confederacy, demonizing antifa, and vowing to “make America great again” (despite the fact that he’s been president for nearly four years now).

But he’s also added some new pitches — including appeals to women and new lines of attack against Democratic nominee Joe Biden — that are as over-the-top as anything he’s said at his rallies going back more than five years now.

Trump began his speech in Johnstown by attacking Biden for purportedly abandoning Pennsylvania for Delaware.

“How the hell do you lose to a guy like this? Is this possible?” Trump said, alluding to the fact that polling averages currently show him losing to Biden by about 10 points nationally.

Referring to what will happen if he loses, Trump went on: “Oh, I’ll never come to Pennsylvania again. I love this place. You know, they say he was born in Scranton, but he left! He left! He abandoned you!”

“He left! He left! He abandoned you” — speaking in Johnstown, Pennsylvania, Trump attacks Biden for the fact his family moved away from Pennsylvania when he was 10 pic.twitter.com/rBf0YCOx05

There’s just one problem: The Biden family moved from Scranton to Delaware when Biden was 13 years old. So unless the idea is that Biden was supposed to start out on his own before he completed middle school, saying that he “abandoned” Pennsylvania by moving with his family is absurd.

If Trump’s attacks on Biden were unconvincing, his pitch to women was somehow even more so. Polling has show that he’s been losing ground with women since 2016 (and that he is in particular struggling to sway suburban women). In response, the president resorted to begging.

“Can I ask you to do me a favor: Suburban women, will you please like me?” Trump said. “Please. Please. I saved your damn neighborhood, okay?”

“Can I ask you to do me a favor: Suburban women, will you please like me?” — Trump’s messaging to women could use a little work pic.twitter.com/xkI5XJanBh

Trump also made comments about his support among women that were factually incorrect — he claimed he “got 52 percent” of the woman vote in 2016, but he actually lost to Hillary Clinton among women by a 54-41 percent spread. He did, however, receive 52 percent of the vote from white women, meaning, intentionally or not, his remark erased all women of color.

That error, however, was nothing compared to the dangerous lies Trump pushed about the coronavirus.

There are rare but well-documented cases of people getting infected with the coronavirus twice. But Trump wants his followers to believe that if they get Covid-19 once, they don’t have to worry about getting it again.

At one point during his rally in Johnstown, Trump asked how many people have had the coronavirus, then told his audience, “you’re right now immune.” He then suggested, falsely, that anybody who says otherwise just wants to take him down politically.

“You’re immune right now” — Trump asks how many people in the audience have had coronavirus, then falsely congratulates them on being immune (there are documented cases of people being reinfected) pic.twitter.com/7l4BnalBVP

The bottom line, as Vox’s Brian Resnick and Eliza Barclay have explained, is experts don’t really understand why some people get infected twice, meaning “while we’re waiting for scientists to figure it all out, everyone, including those who’ve already had the virus, should still try to avoid getting infected at all.”

The president’s bit of dangerous fake news about immunity came minutes after Trump mused about walking into the crowd and kissing everyone.

“I’m immune. I could come down and start kissing everybody,” he said. “I’ll kiss every guy. Man and woman. Look at that guy, how handsome he is. I’ll kiss him. Not with a lot of enjoyment, but that’s okay.”

“I’m immune. I could come down and start kissing everybody. I’ll kiss every guy. Man and woman. Look at that guy, how handsome he is. I’ll kiss him. Not with a lot of enjoyment, but that’s okay.” — the President of the United States, Donald Trump pic.twitter.com/QDeN0cqE1A

It appears the bizarre kissing comments may become a staple of Trump’s rallies. He said the same thing during his Monday night speech in Sanford, Florida.

“They say I’m immune. I feel so powerful. I’ll watch into that audience, I’ll walk in there, kiss everyone in that audience. I’ll kiss the guys and the beautiful women.” — Trump pic.twitter.com/JvhmagVrVA

Some may find these odd comments amusing, but they’re unlikely to persuade anyone who isn’t already wearing a MAGA cap that the president has done a good job handling the pandemic — or even that he has a grasp on the underlying science. Trump, however, isn’t behaving like someone who’s trying to win an election.

It’s almost like Trump is trying to alienate voters

Shortly after his rally in Johnstown ended, Trump posted a tweet disparaging another key demographic group he’s struggling with — seniors — with a meme suggesting those above a certain age, like Biden, are unfit and should be in a retirement home.

He followed that up with a retweet pushing a baseless, unhinged conspiracy theory that President Barack Obama colluded with the Iranian government to stage the killing of Osama bin Laden.

Trump is who he is. But while his act might’ve seemed like a breath of fresh air to some voters in 2016, it’s become increasingly grotesque four years later against the backdrop of a pandemic he mishandled and appears to have given up trying to contain.

For Trump, however, the immediate thrill of playing the greatest hits for his base seems more important than trying to appeal to persuadable voters. So expect more of the same in the rallies he plans to hold almost every night between now and Election Day.

Impossible Foods and Beyond Meat are coming to campuses, offices, and stadiums
Elon Musk’s coronavirus journey: A timeline
On eating watermelon in front of white people: “I’m not as free as I thought”
A week later, President Trump is still defending North Korea agreement
Scott Pruitt, Trump’s scandal plagued EPA chief, has resigned
As they make their final pitches to New Hampshire voters, Democrats amp up their attacks