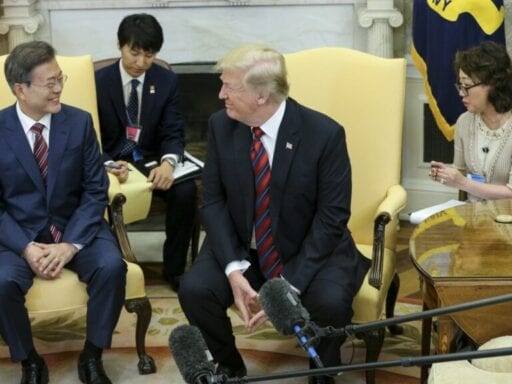 The trade agreement with Seoul is supposed to boost US car sales. That’s unlikely.

At a meeting in New York on Monday, Trump and South Korean President Moon Jae-in signed a revised version of the United States-Korea Free Trade Agreement, known as KORUS.

To be clear, the deal is not brand new — KORUS has been around since 2012. But the new version removes a few regulatory burdens for US automakers to export cars, extends a 25 percent US tariff on imported Korean trucks, and lifts a cap on US car exports to South Korea that don’t need to meet Korean safety standards (caps that American automakers weren’t anywhere close to reaching).

The six-year-old trade deal has allowed both countries to sell more than $60 billion in cars, machinery, and other goods to each other with few restrictions, and South Korea is now America’s sixth-largest trading partner.

However, the Trump administration is unhappy that South Korea has been selling more stuff to Americans than the United States has been selling to South Koreans. Americans love South Korean cars, and cheap steel. That’s largely why the US had a $27 billion goods trade deficit with South Korea in 2016, and Trump decided to renegotiate the trade deal to close the gap. But the new and improved KORUS is hardly revolutionary; it’s basically the same agreement, with a few minor tweaks.

As part of the new deal, the US also agreed to exempt South Korea from its new 25 percent tariff on global steel. Instead, South Korea accepted a quota to limit steel exports to the United States to 70 percent of what it was selling before.

On the surface, the deal seems like a win for the US auto industry, but several experts say it won’t change the fact that South Koreans just don’t want to buy American cars. “It hardly seems like it will have an impact,” says Simon Lester, a trade policy expert at the Cato Institute, a libertarian think tank. “I think [the Trump administration] needed to declare a victory, to just do something and sell it as a win.”

The trade deal comes at a critical moment in US-Korea diplomacy. The South Korean president is trying to broker a denuclearization deal with North Korea, and met with Trump Monday to discuss during a bilateral meeting in New York City. Moon wants Trump to declare peace with North Korea, but Trump made no public commitment on the matter after his meeting with Moon. Instead, he promised to meet with Kim Jong Un and touted the new trade deal he and Moon were about to sign. It’s “very important,” Trump said, according to a White House pool report. Moon called it “significant.”

South Korea is one of America’s closest military allies, but it’s also one of the world’s fastest-growing economies.

When President George W. Bush began negotiating a free trade deal with Seoul in 2006, the idea was to give American companies easy access to South Korea’s growing, affluent consumer market. President Barack Obama continued negotiations, and Congress ratified the pact in 2011. It went into effect a year later. Since then, KORUS has produced mixed results: The US trade deficit with South Korea doubled. Some American industries have expanded and flourished under the deal, but it boosted South Korean exports to America even more.

For example, US beef and dairy exports to Korea skyrocketed under the original pact (South Koreans are growing fond of steaks, burgers, and cheese pizza). Consumers there also buy a lot of American fruits, and businesses buy tons of American airplanes and electrical machinery. But Americans buy way, way more South Korean products, and they drop a lot of money on South Korean cars.

In 2016, the US goods deficit with South Korea added up to $27.7 billion. That sounds like a lot, but it’s just a fraction of the American trade deficit with Japan ($69 billion) and China ($579 billion). The United States did report a small surplus in what is called “service exports,” mostly from Korean tourism to the United States and Koreans who paid tuition at American universities.

But the biggest factor in the trade imbalance is related to car sales, and that’s what really bothers the Trump administration. In 2016, Americans imported $16 billion worth of Korean cars — about 10 times more than the $1.5 billion South Koreans spent importing American cars. Auto industry experts say the reason for this is pretty simple: Americans love Hyundai and Kia cars much more than South Koreans love Chevys and Fords.

American automakers “don’t really make cars that are popular there,” said Lester, of the Cato Institute. “I haven’t seen much of an effort to crack these markets.”

But the Trump administration thinks it’s because the trade deal is bad for America. So he threatened to tear up KORUS as soon as he arrived at the White House. And everyone freaked out.

President Trump alarmed the US foreign policy world when he announced in April 2017 that he planned to scrap the free trade agreement with South Korea. He called it a “horrible deal” that has “destroyed” America.

It was the same rhetoric he used to criticize the North American Free Trade Agreement, on the grounds that it hurt the US manufacturing industry.

But the alarming part about his threats to end KORUS was less about its impact on the US economy and more about its impact on national security. Many worried that Trump’s talk would anger one of America’s most important allies in Asia, at a time when North Korea was ramping up threats of nuclear attacks.

Then in September 2017, those fears intensified when news surfaced that Trump told his advisers to write up paperwork to withdraw from the trade deal with Korea.

“South Korea has been an adamant ally to the United States for the last 70 years. Now, North Korea is provoking and China is expanding their power, flexing muscles,” Choi Seok-young, a Korean trade official who helped write KORUS, told the Washington Post at the time. “We don’t quite understand what is the main purpose of Mr. Trump attacking Korea by terminating ­the Korea-U.S. [free trade agreement] at this critical time.”

The uproar — plus Trump’s diplomacy ambitions in North Korea — appeared to soften his stance. In January, US Trade Representative Robert Lighthizer announced that he would renegotiate the deal instead of withdrawing from it.

A few months later, Lighthizer said negotiators from Seoul and Washington had reached a deal. In summary, the Trump administration wants South Korea to buy more American cars and sell less steel to the United States.

On the surface, lifting this cap is the biggest change in KORUS. But economists are skeptical that will do much to boost American car exports. US car companies haven’t come close to reaching the current 25,000 limit each. Ford only sold 10,727 cars to South Korea in 2016, and Fiat Chrysler exported 7,284.

“It’s not the biggest problem facing the US, but this is a step in the right direction,” said Jeff Ferry, the research director at the Coalition for a Prosperous America, a group that advocates for more protectionist trade policies.

Ferry, who supports the changes to KORUS, said a crucial part of the deal is to extend the 25 percent tariff on South Korean pickup trucks for another 20 years. This so-called “chicken tax” was set to expire in 2021, and American car companies really wanted to keep that tariff in place. Ferry said it has helped keep South Korean companies away from the lucrative US pickup truck market, which is a huge moneymaker for Ford, General Motors, and Chrysler.

Trump trade policies are really about helping US steelmakers

The tariffs were supposed to protect US steel producers from foreign competition, as a matter of national security. Stocks for US steel companies have since skyrocketed, but the tariffs have also harmed countless American manufacturers that buy a lot of steel, including companies that make washing machines and boats. They’ve also harmed the one industry the administration is supposedly trying to help: the US auto industry.

The tariffs are increasing US car prices, and auto exports are starting to fall. A July report from the Center for Automotive Research warns that new tariffs proposed on imported auto parts could shrink auto sales by as much as 2 million vehicles a year, resulting in the loss of up to 715,000 American jobs.

In giving Trump his first signed trade deal, South Korea is expecting something in return.

South Korea’s president ran his political campaign promising to restore ties with the peninsula’s communist North. To do so, Moon needs to get the United States on board with the peace talks, and to get Pyongyang to agree to denuclearize.

So far, those efforts have stalled, according to Vox’s Alex Ward:

[North Korean dictator Kim Jong Un] wants Trump to sign a peace declaration — an agreement that says the Korean War is over and that America will never attack North Korea — before he makes any nuclear concessions. Trump promised Kim he’d do that soon after their June summit in Singapore.

The Trump administration, however, insists that Kim must first cut his nuclear arsenal by 60 to 70 percent — or offer some other major concession — before the US will sign a peace declaration.

Moon has been using the US-South Korea trade deal as leverage in that effort. After Trump agreed to meet again with the North Korean dictator, he and Moon signed the deal.