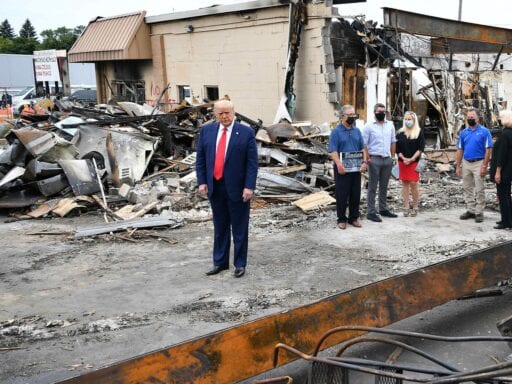 Trump’s initial attempt to downplay revelations he misled about the coronavirus is at odds with everything we know about him.

President Donald Trump’s response to devastating revelations from a new book that he privately knew the coronavirus would be devastating to the US is to say he was trying to project “calm” — a state of being at odds with his entire reelection strategy.

Trump’s political brand relies on stoking fear that “radical left” Democrats support violent looters invading the suburbs. In recent weeks, he’s proclaimed that Joe Biden’s election would “destroy the country” and unleash “chaos, corruption, and economic collapse.” His campaign’s political ads are more akin to horror movie trailers than they are to substantive messages about what Trump hopes to accomplish in a second term. Biden, for what it’s worth, has aggressively condemned looting and reminded American voters that racial unrest is happening during Trump’s presidency — not his.

And yet, in the 24 hours since the Washington Post published audio of Trump’s interviews with Bob Woodward — interviews that reveal the president had a clear grasp of just how grave the threat posed by the coronavirus could be and yet repeatedly misled the public earlier this year — the president’s talking point is that he simply felt an obligation to try and keep the country calm.

“Bob Woodward had my quotes for many months. If he thought they were so bad or dangerous, why didn’t he immediately report them in an effort to save lives?” Trump tweeted on Thursday morning. “Didn’t he have an obligation to do so? No, because he knew they were good and proper answers. Calm, no panic!”

Bob Woodward had my quotes for many months. If he thought they were so bad or dangerous, why didn’t he immediately report them in an effort to save lives? Didn’t he have an obligation to do so? No, because he knew they were good and proper answers. Calm, no panic!

That tweet echoed what Trump told reporters on Wednesday, when he said, “I don’t want people to be frightened. I don’t want to create panic, as you say. And certainly, I’m not going to drive this country or the world into a frenzy.”

Trump, however, clearly has no problem with whipping people into a panic when he thinks doing so is in his political self-interest. In fact, later Thursday morning, Trump posted another tweet suggesting that a vote for Biden is a vote for poor, violent looters to besiege “America’s Suburbs.”

The Democrats never even mentioned the words LAW & ORDER at their National Convention. That’s where they are coming from. If I don’t win, America’s Suburbs will be OVERRUN with Low Income Projects, Anarchists, Agitators, Looters and, of course, “Friendly Protesters”.

Trump’s spin doesn’t make much sense, but it’s at least something he can use to try and explain away evidence that he knew more about the severity of the coronavirus than his public statements from January, February, and March would lead you to believe — evidence that has brought his government’s laissez-faire response to the pandemic under renewed scrutiny.

Trump on Wednesday evening characterized the Woodward revelations as a “political hit job,” despite the fact they consist of nothing more than tapes of him talking.

Trump really did have incentive to tamp down panic — but his motives were political, not health-related

The Woodward recordings reveal that while Trump spent February and March insisting to the public that the coronavirus would go away on its own “like a miracle,” he was more realistic about the threat posed by the pandemic in his conversations with Woodward.

As my colleague German Lopez detailed on Wednesday (emphasis mine):

President Donald Trump admitted to publicly downplaying the real threat of Covid-19 for weeks, even as cities and states shut down and more Americans fell sick, according to excerpts and audio recordings from reporter Bob Woodward’s forthcoming book Rage.

“I wanted to always play it down,” Trump said on March 19. “I still like playing it down, because I don’t want to create a panic.”

In several interviews with Woodward, Trump said he was aware of the threat of the novel coronavirus as early as January, and continued downplaying the true risk the disease presented well into March, when the US’s epidemic took off. (CNN published audio clips from the interviews.)

On February 7, Trump told Woodward, “This is deadly stuff.” He told Woodward that it was five times as deadly as the flu. He acknowledged that the virus “goes through air,” adding, “That’s always tougher than the touch. You know, the touch, you don’t have to touch things, right? But the air, you just breathe the air, and that’s how it’s passed.”

While Trump acknowledged to Woodward that the coronavirus was far deadlier than the flu, publicly he was insisting that Covid-19 wasn’t really as deadly as public health authorities were warning and prematurely trying to strong-arm states into reopening their economies.

In this clip, Trump:
1. Denies WHO’s coronavirus death rate based on “hunch”
2. Calls coronavirus “corona flu”
3. Suggests it’s fine for people w/ Covid-19 to go to work
4. Compares coronavirus to “the regular flu,” indicating he doesn’t get the difference pic.twitter.com/uC9c03zX31

Trump’s comments on Wednesday and Thursday are meant to reassure people that he really had their interests at heart when he told Woodward, “I don’t want to create a panic.” In reality, however, Trump’s motives were political — he was gambling that downplaying the virus was his best bet to keep the economy strong heading into his reelection campaign. And perhaps by downplaying the severity of the virus, he may have encouraged people to take more risks — risks that wound up being deadly for some.

He was wrong. Six months and 190,000 deaths later, the US continues to be uniquely devastated by the ongoing pandemic. The federal government still hasn’t developed a comprehensive plan to get the situation under control, and the president has been more occupied with Twitter browbeating and holding potential superspreader campaign events than he has with tackling the virus. Meanwhile, he’s consistently trailed Biden in the polls.

So, instead of running on his record, Trump’s campaign has had to resort to stoking wildly exaggerated fears about Joe Biden. At the same time, however, Trump wants the American people to buy that he didn’t level with them about the coronavirus because he didn’t want to stoke fear.

Taken together, those talking points are incoherent — but by now we understand that incoherency is a feature, not a bug, of Trumpism.