Trump’s not sure about believing climate science. The Saudis and Putin get the benefit of the doubt. 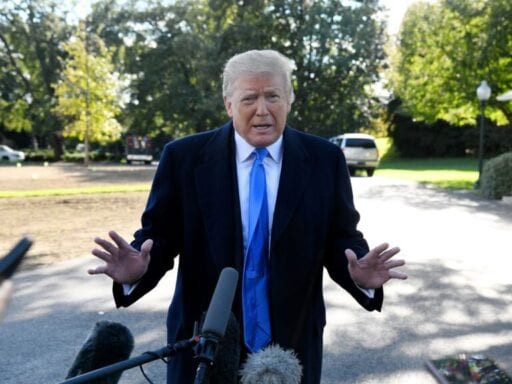 Trump’s 60 Minutes interview with Lesley Stahl shows a lot about who the president thinks is worth believing and when.

President Donald Trump likes to keep an open mind when it comes to a number of matters — sexual misconduct allegations, Vladimir Putin’s election meddling denials, the Saudi government’s insistence it knows nothing about the disappearance and possible murder of journalist Jamal Khashoggi. But there’s one group of people he’s not so keen on believing: climate scientists.

In a combative interview on CBS’s 60 Minutes aired on Sunday, journalist Lesley Stahl pushed Trump on recent hurricanes, including Hurricane Michael, and the role many scientists say climate change is playing in extreme weather. The president has previously declared climate change a “hoax.” Stahl asks what he thinks now.

Trump walked back the “hoax” line a bit. But he still expressed skepticism about whether climate change is permanent and suggested it might not be manmade.

Stahl pointed to the example of Greenland, where “huge chunks of ice” are falling into the ocean, causing sea levels to rise. She also pointed out that climate scientists — including those who work for Trump — say climate change is a problem, and that it’s being caused by people.

“You’d have to show me the scientists, because they have a very big political agenda, Lesley,” Trump said.

A United Nations panel released a new report just last week saying that the world has just 12 years to make changes to global energy infrastructure to limit global warming and the effects of climate change. In November 2017, a US government report laid out the case that there is “extensive evidence” that “human activities” are the dominant cause of global warming.

But Trump has largely shrugged off the matter — he pulled the United States out of the Paris climate agreement, which is aimed at combating global warming, last year.

Trump’s not sure about taking climate scientists at their word. The Saudis and Putin get the benefit of the doubt.

While the president remains skeptical of overwhelming scientific evidence that climate change is a real, manmade problem, he’s much less skeptical when it comes to other sources — such as the Saudi government, Russian President Vladimir Putin, and North Korean leader Kim Jong Un.

Of the Saudi government, which is suspected of being responsible for the disappearance and perhaps murder of Khashoggi, a Saudi journalist and critic, Trump said “nobody knows yet” whether Crown Prince Mohammad Bin Salman gave the order for Khashoggi to be killed.

The Turkish government has reportedly told US officials that it has audio and video recordings that prove Khashoggi was killed inside the Saudi Consulate in Istanbul, but Trump still isn’t sure.

“They deny it. They deny it in every way you can imagine,” Trump said. “In the not-too-distant future, I think we’ll know the answer.”

In a press conference with Putin over the summer, Trump said he couldn’t see why it would have been Russia that interfered in the 2016 election. He later amended the comments, but in the 60 Minutes interview, which was taped at the White House on Thursday, he still demurred on the matter of Russia and his habit of making nice with Putin.

When asked by Stahl whether he agrees that Putin has been involved in assassinations, Trump shrugged, “Probably he is, yeah. Probably.”

And when asked about Russian interference in US politics, Trump said he thinks that Russia meddled but that “China meddled too.”

“You are diverting the whole Russia thing,” Stahl said in the back-and-forth over Russia.

“I’m not doing anything,” Trump said.

Stahl also pressed Trump on North Korea and his relationship with Kim. At a rally last month, Trump said he “fell in love” with Kim over denuclearization letters. Trump and Kim met at a summit in Singapore in June to discuss relations and the country’s potential denuclearization. Trump took a victory lap immediately thereafter, declaring that North Korea is no longer a threat, though there’s evidence that’s not the case and that the country is not, in fact, ending nuclear activities.

Stahl pointed out that North Korea could actually be building more missiles and hasn’t gotten rid of a single weapon. Yet again, Trump decided to side with North Korea.

“Well, nobody really knows,” Trump said. “I mean, people are saying that.”

He also shrugged off Kim’s brutality as a dictator and brushed aside his “love” remarks about Kim as a “figure of speech.”

Lesley Stahl on Kim Jong Un: “He presides over a cruel kingdom of repression, gulags, starvation…slave labor, public executions. This is a guy you love?”
President Trump: “I know all these things… I get along with him, okay? … Let it be whatever it is to get the job done.” pic.twitter.com/J6Gbuns2t6

For Trump, who to believe — and who not to believe — appears to be a matter of convenience, whether it’s political, economic, or personal. On worrying about climate change, Trump said acting on it could mean “trillions and trillions of dollars” and “millions and millions of jobs.” He added, “I don’t want to be put at a disadvantage.”

On the other hand, on the matter of the Saudis and what sort of action the US might take if the journalist was indeed murdered, Trump worried canceling a military contract with them would be too costly: “I’ll tell you what I don’t want to do — Boeing, Lockheed, Raytheon,” he said, adding, “There are other ways of punishing.”

The second act of Jeff Bezos could be as big as his first
Trump says he’s considering putting the New York area under quarantine
What to fear in Trump’s White House
The new guilty plea in John Durham’s investigation, explained
Texas Republicans are trying to use Beto’s punk rock days against him
Vox Sentences: The far-right White House guest