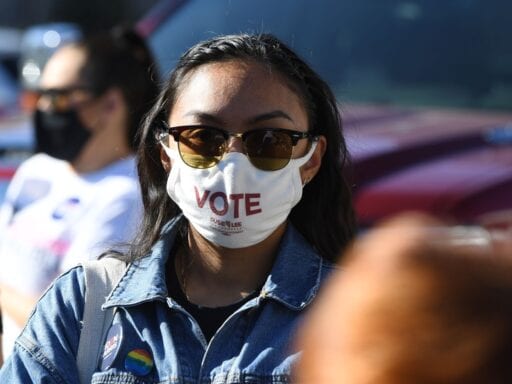 Behind in the polls, Republicans are becoming increasingly blunt about their plan to win the election: don’t let everyone’s votes be counted.

As Astead Herndon and Annie Karnie reported for the The New York Times Saturday evening: “Trump advisers said their best hope was if the president wins Ohio and Florida is too close to call early in the night, depriving Mr. Biden a swift victory and giving Mr. Trump the room to undermine the validity of uncounted mail-in ballots in the days after.”

This is a very plausible scenario. As Vox’s Andrew Prokop has explained, due to differences in local election law, “the general expectation is that Florida, North Carolina, and Arizona are in a good place to count most of their votes on election night or soon afterward” but “Pennsylvania, Wisconsin, and Michigan — the trio of states that clinched Trump’s victory in 2016 — are a different story.”

It’s a long-shot effort, and a bit wild, but the only reason it’s on the table at all is that the GOP-controlled legislatures in those three states have deliberately acted to keep the vote count slow — so there’s indication Trump would have solid party support if he tries it. Meanwhile, other actions over the weekend from North Carolina to Texas reveal a Republican Party that is broadly committed to using roadblocks to voting as a strategy for victory.

Police officers in Graham, North Carolina used pepper spray on a peaceful crowd participating in a Black Lives Matter “march to the polls” event. Eyewitnesses in North Carolina reported gas was turned on a crowd including children and the elderly.

This morning/afternoon in Graham was wild. Children and elderly were getting tear gassed. The sheriff and Graham police should be ashamed of themselves for the pain they caused.

This morning/afternoon in Graham was wild. Children and elderly were getting tear gassed. The sheriff and Graham police should be ashamed of themselves for the pain they caused.

Meanwhile in Texas, where the new “judge” (chief executive) of Harris County (which includes Houston) has gone to extraordinary lengths to boost voter turnout, two disturbing incidents serves as reminders of the lengths to which Republicans will go to win.

On the legal front, the Texas Republican Party has sued in court to get over 100,000 votes that have already been cast at Houston-area “drive-through” voting centers invalidated. Tossing them at this point would not only be a huge inconvenience for those voters, it would likely prevent people from voting altogether. The claim is legally dubious and has already been dismissed by a Republican-dominated Texas Supreme Court. But the district court judge to which the case has been assigned, Andrew Hanen, is one of the most right-wing and incautious figures in the entire federal judiciary.

Separately in Texas, a swarm of Trump supporters ran a Biden/Harris campaign bus off the road in Hays County in the Austin suburbs, prompting an FBI investigation.

In a stark contrast with Republicans’ purported belief in decorum over things like Sarah Sanders being refused service at a restaurant, Trump hailed the assailants on Twitter remarking “I LOVE TEXAS!”

It’s very unlikely that police officers going rogue in North Carolina will effectively suppress the vote there, or that Texas will be decisive in the election. But these irregular activities speak to a larger strategy for winning the election that focuses on invalidating legitimate votes.

The plan to not count the votes, explained

Many states, especially those with Democratic governors, moved to expand early voting and vote-by-mail options this year, both in light of the Covid-19 pandemic and also because Democrats tend to favor these ideas in general. Trump has all along maintained the paradoxical position that expanded mail voting is bad because it’s highly vulnerable to fraud (which is not true), but that the widespread use of vote-by-mail in Florida (where it’s well-entrenched and Republicans have a robust vote-by-mail infrastructure in place) is good.

The dispute about vote-by-mail and the larger dispute about the pandemic ultimately opened up a huge partisan gap in voting mode. Across the country, Biden supporters are much more likely than Trump supporters to be voting by mail.

This, in turn, opened up a partisan gap in election administration. In states like Florida and Arizona where mail voting is long established, it’s normal to start counting early votes in advance. As the Democratic governors in the northern battleground states moved to expand early voting, they also moved to update vote-counting procedures to match the fast-counting process. But in all three states, legislatures that have Republican majorities (despite a majority of votes in each state having been cast for Democratic state legislators) opted not to do that.

NEW: This map shows how 9 of 99 state legislatures have GOP minority rule where Dems won more votes than the GOP in the last election but no majorities. The GOP gerrymandered MI, NC, PA, & WI, while MN has court-drawn maps. Without minority rule here, Dems would have full control pic.twitter.com/zqn51ZG2iW

Separately, states vary in how they treat the deadline for ballots to arrive. In some places, a ballot is valid as long as it was mailed by Election Day (the way it works with tax returns) while in others it must arrive by Election Day. Republicans have forced states to discount late-arriving votes, while simultaneously the US Postal Service has slowed down mail delivery, with large slowdowns seeming to happen in swing states.

Consequently, in the northern battlegrounds:

Conceptually, there is no problem here. It’s extremely common in the United States for it to take days or weeks to fully tally the votes in an election. In 2018, there was a House race in California that wasn’t settled until November 26. But Trump’s rhetorical denigration of mail voting as fraud-ridden, his frequent statements at rallies that we should know the winner of the election on Election Day (which is not, and has never been, any kind of rule), and Republican legislatures’ refusal to modernize counting practices have long raised eyebrows.

Herndon and Karnie’s reporting confirms that if Trump manages to hold on in the South, his campaign has an actual formal strategy of trying to invalidate the vote in the slow-counting Great Lakes states.

And the irregular and at times violent behavior in Texas and North Carolina are reminders that Republicans won’t necessarily limit themselves to legal means — or be limited by sworn law enforcement officers — in their efforts to get what they want.