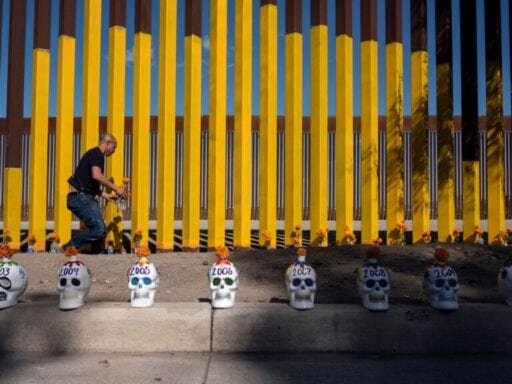 Share
Loading...
A migrant from Mexico places flowers next to the border fence where he and members of the Coalicion Pro Defensa del Migrante (Pro Defense of the Migrant Coalition) painted a graph showing statistics of dead migrants in Tijuana, Mexico, on November 2, 2019. | Guillermo Arias/AFP via Getty Images

Mexico is now sending more migrants to the southern border than any other country.

The crisis at the southern United States border appears to be changing now that Mexico is sending more migrants to the US than any other country.

For 18 months, the crisis could have been described as primarily one of families and unaccompanied children from Central America’s Northern Triangle region of El Salvador, Honduras, and Guatemala arriving at the border in unprecedented numbers. The Trump administration consequently rolled out several policies designed to keep those migrants out.

Under its “Remain in Mexico” policy, officially known as the Migrant Protection Protocols (MPP), the administration has sent more than 60,000 migrants back to Mexico to await decisions on their asylum applications.

The administration has also brokered agreements with the Northern Triangle countries, allowing the US to deport migrants both to the countries they came from and passed through on their way to the US — though only the agreement with Guatemala has gone into effect so far.

The Department of Homeland Security has issued a separate rule preventing migrants from being granted asylum if they passed through any country other than their own before arriving in the US, which means that asylum seekers from any country but Mexico are ineligible for asylum.

Together, these policies have been effective in achieving President Trump’s goal of driving down the overall number of migrants showing up at the border, which has dropped about 70 percent since its peak in May. None of the policies, however, apply to Mexican citizens, who cannot be legally sent back to their home country if they would likely face persecution there.

That has left the administration unprepared to deal with the changing demographics of those arriving at the border: In October, US Customs and Border Protection (CBP) reported that more migrants from Mexico arrived at the southern border than those from the Northern Triangle countries. In response — even though it doesn’t yet have an official policy under which it can turn away Mexicans — the administration has begun experimenting with ways to prevent Mexican asylum seekers from entering the US.

In September, CBP also started subjecting more Mexicans to its practice of “metering,” under which it limits the number of migrants processed at ports of entry each day.

Those initiatives have proved effective: Mexicans who were previously being processed at the ports are now turned away and forced to wait in the migrant camps on the Mexican side of the border, where migrant shelters are at capacity due to the metering that has affected immigrants from other nations. The largest camps are in Matamoros, which is directly across the border from Brownsville, Texas, and Ciudad Juárez, which is adjacent to El Paso.

CBP did not immediately respond to requests for comment about the pilot program in El Paso or its practice of metering Mexicans.

“There’s an intent on the part of CBP to not have anybody come into the United States to request asylum,” Jodi Goodwin, an attorney representing migrants in Matamoros, said. “Because they can’t subject Mexicans to MPP, they’ve subjected them to metering in an effort to wear them out so they won’t apply for asylum. That’s an intentional policy that they’re using to make it so that Mexicans don’t apply.”

Turning Mexicans away at ports might not be legal, but CBP is doing it anyway

Trump administration officials typically encourage migrants to get in line at the ports of entry along the border so that they can seek to enter the US legally — but that has become all but impossible due to CBP’s metering policy, which started in mid-2018. Typically, CBP might process no more than half a dozen families on a given day, creating a bottleneck of asylum seekers who are waiting on the Mexican side of the border.

Mexican immigration authorities and the migrants themselves keep lists of those who are waiting and handpick those allowed into the port for processing each day. The number of names on those lists exceeded 26,000 in August and there’s no telling how much longer immigrants will have to wait before they are processed at the port.

CBP has maintained that Mexicans were exempt from metering, likely because federal law and international treaties prohibit sending asylum seekers back to places where their “life or freedom would be threatened” on account of their race, religion, nationality, political opinions, or membership in a “particular social group,” such as a tribe or ethnic group. On the other hand, the US government has argued that Central Americans can be subject to metering because they are “safe” from persecution in Mexico (though advocates have also argued that isn’t true).

Mexicans claiming asylum are typically victims of cartel violence and extortion or have been targeted based their indigenous heritage, Goodwin said. The most recent waves of Mexican asylum seekers have come from the southern states of Chiapas, Oaxaca, Guerrero, and Michoacán, where cartel violence has spiked in recent months.

But Mexicans who claim they are facing those kinds of threats in their home country — and in some cases, those who have proof of those threats — are now being turned away when they present themselves at the border.

As of September, CBP stopped processing Mexicans in El Paso unless they put their names on the metering lists. Officials have been summarily rejecting anyone who lacks entry documents, typically telling them “we’re full” and that they should come back at another time, Shaw Drake, an attorney with the ACLU, told Vox.

“CBP is systematically violating U.S. and international law by turning Mexican nationals back into the very country and dangers from which they have attempted to flee,” the ACLU wrote in a November 14 complaint to the US Department of Homeland Security Office of the Inspector General.

In other parts of the border, attorneys said that CBP officials have been metering Mexicans all along, despite what officials have claimed. About 11,000 Mexicans, or more than half of those affected by the policy, have been turned away at the border as of this month, according to a study by the Strauss Center at the University of Texas at Austin.

The ACLU has documented more than a dozen examples of Mexican citizens who have been sent back to Mexico at ports of entry in El Paso and Brownsville.

One woman had approached CBP officials at the port in El Paso on three occasions identifying herself as a Mexican asylum seeker, but was turned away. She has a strong asylum case: Cartel members kidnapped her son and told her they would send her his severed head in a cooler if she didn’t pay an extortion fee. They eventually released him after she paid, but Mexican police declined to investigate the case.

Goodwin said that, even when she has escorted Mexican nationals in Matamoros to the port and advocated on their behalf, officials have tried to turn them away. Only after she has waited for hours and demanded to see supervisor after supervisor have officials finally agreed to process the migrants.

“I show them the law, but it falls on deaf ears,” she said.

A lawsuit brought by Al Otro Lado, one of the few legal aid organizations serving migrants in Mexico, argues that the metering policy deprives migrants of access to the US asylum system and is in violation of federal immigration law and their constitutional due process rights. Al Otro Lado has asked a federal court in California to block the policy, but in the meantime, it remains in effect. And Mexican asylum seekers will likely continue to be put at risk, Drake said.

“Not only are they at particular risk because the people they’re fleeing from are in the very country they are forced to remain in, they are easy targets for organized crime,” he said. “These US policies have created an entire new industry for kidnapping and extortion. They’re sitting prey.”

The administration is secretly fast-tracking deportations of Mexicans

The Trump administration has long used El Paso as its testing ground for immigration policies — it was where it first started separating immigrant families in 2017. More recently, the administration has quietly piloted a program in El Paso designed to speed up deportations of Mexican asylum seekers.

Little is known about the program, even among attorneys on the ground. Mexican asylum seekers are detained in CBP holding facilities and given no more than 48 hours to prepare for an interview in which an asylum officer determines whether they can proceed in pursuing their asylum claims, Hamed Aleaziz of BuzzFeed News reported.

If they pass, they would be permitted to apply for asylum before an immigration judge in what is usually a lengthy process: As of June, migrants with active immigration cases have been waiting an average of almost two years for a decision. If not, they can then appeal an asylum officer’s decision to an immigration judge over the phone, or face deportation.

Attorneys said that the program is functionally the same as the “Prompt Asylum Case Review” program, which processes Central Americans at the El Paso CBP station, as first reported by the Washington Post’s Robert Moore. Attorneys have also expressed concerns about how that program does not provide migrants with a full and fair process, giving them little time to prepare or contact an attorney.

Drake, the ACLU attorney, said that not only are the asylum seekers being held in facilities that are “notorious for abusive conditions” under the program, but they are given extremely limited ability to contact their relatives or attorneys to assist them in the fast-tracked proceedings. Attorneys want to offer migrants affected by the program legal counsel — but they have no way of identifying migrants, unless they’ve come into contact with them in Mexico already.

For most, that means a positive outcome is likely out of reach. Studies have found that detained immigrants with access to legal counsel were twice as likely to obtain the protections they sought as compared to those without counsel.

Taylor Levy, an immigration attorney representing migrants in Ciudad Juárez, said that appealing to an immigration judge over the phone might also hamper migrants’ ability to adequately argue their cases. Some of her clients who brought printed proof of the death threats against them were not able to show them to the judge because their proceedings were conducted telephonically — and their asylum claims were subsequently rejected.

“These are possibly life or death decisions about their future,” Drake said. “The agency will go as far as possible toward the goal of bringing immigration at the border to zero.”

Vox Sentences: Climate talks left in the cold
The Supreme Court is about to hit an undemocratic milestone
The US was offered millions of masks in January. The Trump administration turned the offer down.
Trump told 6 falsehoods about Syria in 4 minutes
Tom Steyer’s foreign policy plan: Just do whatever Obama did
Paid sick leave could be a deciding issue in November’s key House races