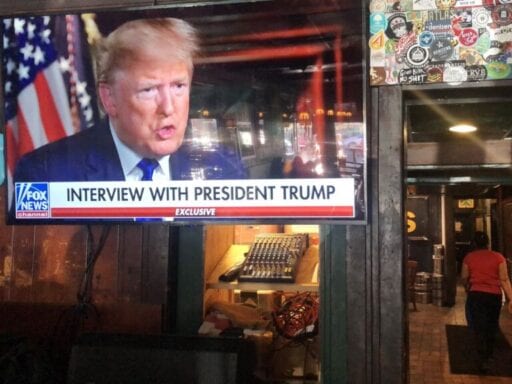 President Donald Trump invests a lot of energy into portraying his Democratic opponents as a pack of incompetent, crazed cheaters. A lot of that is based on projection. But unfortunately, the dysfunctional caucuses process in Iowa provided the president with fresh material he’s already using to make his cynical case.

On Monday evening and into Tuesday morning, Trump and his associates, including campaign manager Brad Parscale and both of the president’s adult sons, posted tweets making unfounded claims about the ongoing delay in the state party reporting the caucuses results. (The Iowa Democratic Party said the delay was due in part to technical errors with an app that was used to report results from each precinct.) Trumpworld baselessly suggested the problems are evidence the process was rigged against a candidate the establishment didn’t want — presumably a reference to Sen. Bernie Sanders.

And by “Quality Control” they mean fixing the results to get the candidate the Democrat Overlords in DC want. https://t.co/EkIztYHYuN

Mark my words, they are rigging this thing… what a mess. This is why people don’t want the #Dems running our county. #meltdown

It’s not as though Parscale and the Trumps have good faith concerns about the sanctity of the Democratic primary. But discrediting the democratic process in general by suggesting the results are “rigged” against a candidate who is not favored by the Democratic establishment is, in addition to being a piece of Russian propaganda, a way to demoralize would-be voters in a manner that’s helpful for Trump.

Sen. Lindsey Graham (R-SC) also stoked conspiracies about rigging (and at least one Democratic member of Congress appeared to do this as well):

What are the odds that:

➡️ most anticipated poll of the year (@DMRegister) is cancelled.

….and it has nothing to do with a Bernie blowout and a Biden crash?

To be clear, the Iowa caucus results, whenever they are released, will not be rigged. Even if there was human error and issues with the process in addition to technical problems, there’s an extensive paper trail documenting caucus-goers’ preferences. That, as my colleague German Lopez explained, will serve as the backstop for issues like the ones that marred timely reporting of the results.

Still, conspiracy theories thrive in an absence of information, and the Iowa Democratic Party put itself in a position where there is still no solid data about the results well over 12 hours after the caucuses came to an end. Team Trump filled that void with conspiracy theory talk, which in an extreme case led people to believe Democrats were running a pedophilia ring out of a Washington, DC, pizzeria in 2016 — a bad omen for what we’re in for the rest of this campaign cycle.

Trump, meanwhile, framed the Iowa cluster as a preview of what would happen if a Democrat defeated him in 2020 — even though the Democratic candidates have good reason to be just as if not more frustrated about what unfolded there as anyone else.

The Democrat Caucus is an unmitigated disaster. Nothing works, just like they ran the Country. Remember the 5 Billion Dollar Obamacare Website, that should have cost 2% of that. The only person that can claim a very big victory in Iowa last night is “Trump”.

While some prominent Democrats argued the Iowa caucuses debacle should be the end of the caucuses altogether, Trump took the opportunity to curry favor with voters there by trying to place blame on the national Democratic Party instead of state officials.

It is not the fault of Iowa, it is the Do Nothing Democrats fault. As long as I am President, Iowa will stay where it is. Important tradition! https://t.co/bX3FLvua1C

And then, adding salt in Democrats’ wounds, Gallup came out with polling on Tuesday morning showing Trump’s approval rating at an all-time high of 49 percent. It’s just one data point. But it’s consistent with the FiveThirtyEight and RealClearPolitics polling averages, both of which show Trump’s approval slowly but steadily ticking up in the latter part of 2019 and into this year, even as Democrats impeached him and put him on trial.

So instead of Democrats being able to take advantage of first big news cycle of the 2020 campaign, the Iowa caucuses ended up being a big mess that devolved into conspiracy theorizing. It gave Trumpworld a golden opportunity to take a victory lap for doing nothing at all. And it also gave us a taste of the “rigged” messaging the president’s team is likely to use if there’s any questions surrounding the primary results, not to mention the outcome of Trump’s reelection campaign.

With the State of the Union set for Tuesday night and his acquittal in the impeachment trial likely to happen on Wednesday, the rest of the week is looking good for Trump as well. There’s a long way to go in the Democratic primary, but if the ultimate goal is to defeat Trump, then things are off to a poor start.