Trump’s “PRESIDENTIAL HARASSMENT” tweets are an insult to #MeToo 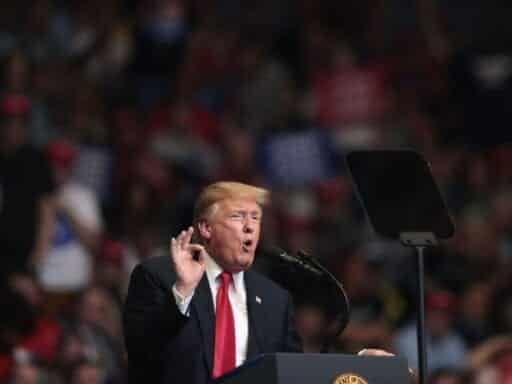 Trump co-opts the language of the movement to paint himself as a victim.

It wasn’t the first time Trump used the phrase. He tweeted the same thing in April, a few hours before the scheduled release of special counsel Robert Mueller’s report on Russian interference in the 2016 election. And back in December, he complained that the “phony Russia Witch Hunt” was impacting his poll numbers. “It’s called Presidential Harassment,” he tweeted.

Trump’s use of “presidential harassment” has ramped up over time, as David A. Graham at the Atlantic noted in January. It’s a way for the president to cast himself as an innocent victim of outside forces who are depressing his poll numbers and threatening his authority.

But by using the word “harassment,” Trump is also co-opting the language of the #MeToo movement. In recent years, countless women have come forward to report unwelcome sexual behavior by powerful men — including Trump himself. By using the same language, Trump is suggesting that he’s actually the real victim.

It may be a way for him to speak to a Republican base that’s grown increasingly negative on #MeToo over time. By crying “presidential harassment,” Trump gets to repudiate investigations into his behavior and take a swipe at Democratic #MeToo supporters, in the space of a single tweet.

Trump and his supporters have been using the phrase “presidential harassment” since at least November 2018, when Senate Majority Leader Mitch McConnell used it in an interview with CNN about the new Democratic majority in the House. McConnell used the phrase in a relatively neutral way, arguing that Republicans had perpetrated harassment when they impeached President Bill Clinton in 1998.

“The whole issue of presidential harassment is interesting,” McConnell said. “I remember when we tried it in the late ’90s. We impeached President Clinton. His numbers went up and ours went down and we underperformed in the next election.”

Given that history, McConnell said, “Democrats in the House will have to decide just how much presidential harassment they think is good strategy.”

For Trump, however, “presidential harassment” quickly became a cudgel to use against Democrats and a way to denigrate the Mueller investigation. A few days after McConnell’s comments, Trump said in an interview with the Daily Caller that Democrats might “play the presidential harassment game” when they took over the House. He also said that the “Mueller witch hunt” was “pure harassment.”

Trump used the phrase more frequently in the ensuing months — eight times between November and early January, by the Atlantic’s count, and more after that.

In fact, Trump tweeted the same all-caps “PRESIDENTIAL HARASSMENT” message at least twice before Thursday, once on March 5 and again on March 8.

The president’s supporters have picked up the message. Around the time of the Mueller report’s release in April, conservative news sources and ordinary Americans were agreeing with Trump’s message on Twitter.

Today is a wonderful day for ALL Americans, and a much deserved day for President @realDonaldTrump after enduring two long years of continued presidential harassment. There was no collusion. There was no obstruction. It’s time for Democrats to engage in a legitimate talking point

The phrase clearly evokes the language of #MeToo

In referring to the Mueller investigation and the actions of Democrats in Congress as “harassment,” Trump is using language Americans are more used to hearing the context of #MeToo — since the movement entered its most public phase in October 2017, more and more people have come forward to speak about sexual harassment they’ve experienced in the workplace and elsewhere.

Sexual harassment isn’t necessarily a partisan issue, and some Republican women have urged their party to take it seriously. However, the Republican Party has remained skeptical of #MeToo, perhaps in large part because multiple women have accused the president of sexual misconduct.

In the wake of high-profile allegations against conservatives like one-time Senate candidate Roy Moore and Justice Brett Kavanaugh, opposition to #MeToo has grown on the right, with Republicans developing a more negative opinion of the movement over time — in early 2019, 42 percent of older female Trump voters said false allegations were worse than unreported sexual assaults, up from just 8 percent in November 2017, according to a poll by YouGov for the Economist.

Trump, meanwhile, has mocked the movement, and women who come forward to report misconduct, multiple times. In July 2018, he joked about tossing a DNA test kit to Sen. Elizabeth Warren (D-MA), who faced controversy over her ancestry: “we have to do it gently because we are in the MeToo generation,” he said. At a rally in October, he made fun of Christine Blasey Ford, who says that Kavanaugh sexually assaulted her. At another October rally, he joked about not being allowed to use the phrase “the one that got away” because of “the rules of #MeToo.”

And Trump has long smeared the women who accused him of misconduct, saying “every woman lied when they came forward to hurt my campaign.”

His use of the term “presidential harassment,” then, may be more than a way of delegitimizing the investigations into him. It may be a way for him to speak to a base that’s increasingly skeptical of #MeToo.

Concerns over sexual harassment are overblown, Trump seems to be saying. The real problem is “presidential harassment,” and the real victim is him.

Exclusive: Kamala Harris and Ayanna Pressley have a $125 billion plan to help the smallest businesse...
Trump’s catastrophic foreign policy weekend, explained
Contraband cellphones have given us prison TikTok
Crazy Rich Asians is shaping up to be one of 2018’s biggest success stories
Why the next president should establish a Department of Climate
A federal court just blocked Trump’s attempt to quietly cut legal immigration by up to 65%