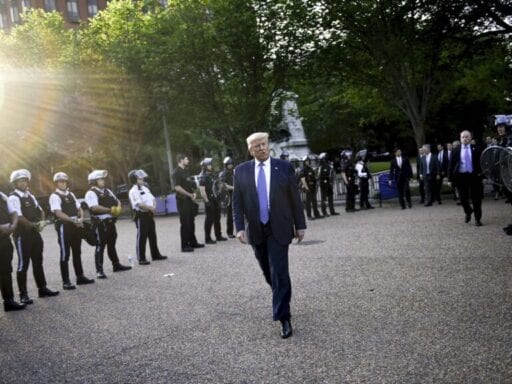 Share
Loading...
As President Trump addressed the country from the Rose Garden, loud booms could be sporadically heard in the background as law enforcement officers fired tear gas and rubber bullets at peaceful protesters who had gathered near the White House. | Brendan Smialowski/AFP via Getty Images

Monday night uprisings in DC show the danger of Trump’s insistence for troops at protests.

President Donald Trump made his first White House address on the protests around the US Monday. From the Rose Garden, about 15 minutes before Washington, DC’s 7 pm ET curfew took effect, he addressed peaceful protesters nationwide, telling them, “I will fight to protect you.”

However, it quickly became clear that law enforcement would instead fight protesters on his behalf. And his insistence in increasing the number of law enforcement personnel in Washington, DC, only led to greater chaos Monday night, with numerous examples of the sort of police action protesters have been demonstrating against.

In his speech, Trump did not invoke the Insurrection Act, which would allow him to send troops to communities across the US, but he did offer each state military support — something no state took him up on. And he said of Washington, DC, “What happened in the city last night was a total disgrace. As we speak I am dispatching thousands and thousands of heavily armed soldiers, military personnel and law enforcement officers to stop the rioting, looting, vandalism, assaults and wanton destruction of property. We are putting everybody on warning.”

But in their first act of the evening, that additional law enforcement acted both with violence and without warning. As Vox’s Zack Beauchamp reported, “Just before [Trump] spoke, federal police violently broke up a peaceful protest just outside the White House, tear-gassing a group of about 1,000 demonstrators and then firing rubber bullets at them so Trump could have an uninterrupted photo op at a nearby church damaged in the weekend’s upheaval.”

Here’s how this scene was viewed live in Australia. One of America’s closest and most dependable allies. Rendered speechless. Just watch. pic.twitter.com/IjOzgs3WYo

Mariann Edgar Budde, the bishop of that church — St. John’s — told CNN she was “outraged” by Trump having the protesters cleared simply so he could pose with a Bible in front of a boarded-up church, calling the message he sent “antithetical to the teachings of Jesus.”

The move outraged the district’s local policing partners as well. Arlington County, a suburban area abutting the city in Virginia, has a mutual aid agree in place with Washington, DC, that allows police resources to be shared between the two. Some members of the Arlington County Police Department were among the force ordered to clear the area between the White House and St. John’s, and officials withdrew their police from the city, angered about the officers being used to suppress a protest.

A statement from the county says its leaders are now “re-evaluating the agreements that allowed our officers to be put in a compromising position that endangered their health and safety, and that of the people around them, for a purpose not worthy of our mutual aid obligations.”

The lack of ACPD officers likely went unnoticed by protesters, however, who, true to the president’s word, faced federal law enforcement and heavy-handed tactics.

Acting Customs and Border Patrol commissioner Mark Morgan proudly announced that CBP officers had been deployed in DC to stop “chaos & acts of domestic terrorism by groups of radicals & agitators” on Twitter one hour and 20 minutes before the curfew began.

CBP personnel have deployed to the National Capital Region to assist law enforcement partners. These “protests” have devolved into chaos & acts of domestic terrorism by groups of radicals & agitators. @CBP is answering the call and will work to keep DC safe. pic.twitter.com/QLueFkgaPO

And the US Army appeared to be on the scene as well — Fox News reports low-flying Army Blackhawk and Lakota helicopters hovered just a little ways above protesters’ heads, in an apparent attempt to force protesters off the streets using the turbulence created by their rotors.

The helicopter tactics came following the curfew and were reportedly effective in some neighborhoods. However, they also led to the sort of “wanton destruction of property” Trump blamed protesters for in his Rose Garden speech — the military vehicles destroyed storefronts and trees, according to Fox News.

The New York Times notes the helicopter tactic is a common one in war zones, where it is used to scatter enemy forces. The fact that it was used domestically represents a literal militarization of the police — and is exactly the sort of policing tactic protesters hope to end with their demonstrations.

As are putative measures by police — and examples of such measures were reportedly seen in at least one DC neighborhood, where residents sheltered protesters out after the 7 pm curfew.

Resident Rahul Dubey opened his door to protesters being chased through the city’s DuPont Circle neighborhood — which is adjacent to the White House — around 11:30 pm. According to DCist, officers were kettling, or attempting to trap by flanking, the protesters using flash bang grenades and pepper spray.

“I opened a door,” Dubey told the Washington Post’s Derek Hawkins. “You would have done the same thing.”

They shot mace at peaceful protesters is a residential neighborhood. The man who took us in is named Rahul Dubey. He gave us business cards in case they try to say we broke in. pic.twitter.com/gKzmrvCa75

Between 50 and 100 people came in. In response, law enforcement took up position outside the house. They were still there at 2 am, and had been joined by what Hawkins described as “a big transport bus.”

DC is one city, but Tuesday night offered a preview of the president’s vision for policing these protests. While other cities are under state and local control, the federal government has control over much of the city’s law enforcement power — and as DCist noted, can even temporarily assume control of the city’s police force. If Trump were to invoke the Insurrection Act, the entire country could look like DC did on Monday — if not worse.

Trump promised that if mayors and governors increased military presence in their jurisdictions, it would bring “security, not anarchy, healing not hatred, justice, not chaos.” Monday night in DC showed just how hollow — and dangerously unhelpful — that promise was.