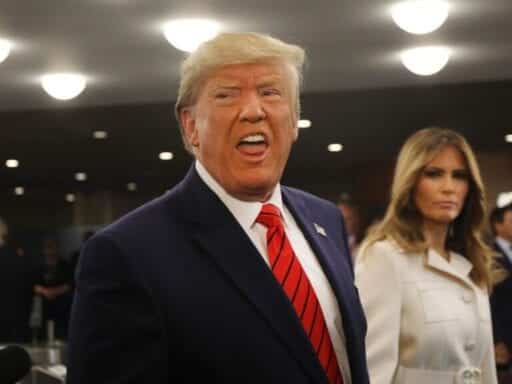 On Monday, it was about “corruption.” On Tuesday, it was something else entirely.

On Monday, Trump told reporters that his decision to withhold aid to Ukraine — a decision seemingly at the heart of a whistleblower complaint roiling Washington — was over his concerns to ensure that the country’s new government was doing everything possible to root out corruption. But asked a similar question on Tuesday, Trump’s talking point suddenly changed to his frustrations about European countries not spending enough on foreign aid.

“My complaint has always been, and I’d withhold again, and I’ll continue to withhold until such time as Europe and other nations contribute to Ukraine, because they’re not doing it,” Trump told reporters, ahead of his speech to the United Nations General Assembly.

The change from Monday to Tuesday was captured in this clip put together by CNN.

Wow — CNN put together this clip highlighting how Trump changed his public rationale for withholding aid to Ukraine from yesterday to today pic.twitter.com/25QJ8VPsnU

Though the full $391 million aid package to Ukraine was ultimately delivered, the reasons for Trump’s initial move to withhold the payment have come under scrutiny following news that an intelligence community whistleblower filed a complaint about Trump’s dealings with the Ukrainian president. News surrounding the complaint, which the administration has gone to extraordinary lengths to conceal, has raised concerns that Trump used congressionally approved military aid as leverage to pressure a foreign country to investigate his potential political opponent.

Both Trump and his lawyer, Rudy Giuliani, have tried to get ahead of the whistleblower story by acknowledging that they encouraged the Ukrainian president to undertake a “corruption” investigation that could implicate Democratic presidential candidate Joe Biden’s son, but they have denied that the aid money was used as leverage. Trump on Tuesday promised to release a transcript of one call he had with Ukrainian President Volodymyr Zelensky that he says will show it “was a very friendly and totally appropriate call” with “NO quid pro quo!”

On Monday evening, the Washington Post broke news that Trump asked his chief of staff, Mick Mulvaney, to make sure that Ukraine didn’t get the aid payment just days before his July phone call with Zelensky — one in which he reportedly “repeatedly pressured the president of Ukraine to investigate Joe Biden’s son,” according to the Wall Street Journal. Senate Majority Leader Mitch McConnell told reporters on Tuesday that he wasn’t given an explanation for why the aid was initially held up.

If Trump’s move to delay the payment wasn’t related to his desire for the Ukrainian government to investigate Biden, you’d expect him to be able to state what his reasons were. But his suddenly shifting talking points suggest he’s having a hard time keeping his cover story straight.

Both those reasons he’s offered over the past two days are different than the ones Mulvaney reportedly gave the Pentagon and State Department when telling them to withhold the aid in mid-July; at the time, the Washington Post reports that he said Trump had “concerns” about whether the money needed to be spent at all.

There’s another way in which the “corruption” rationale Trump presented on Monday is in tension with the “Europe should spend more on foreign aid” rationale he advanced 24 hours later. After all, if Trump really had such grave concerns about corruption in Ukraine, and doesn’t think corrupt governments should receive foreign aid, then it doesn’t make sense that he would want European countries to give more money to them.

Even Trump may have realized that arguably the most personally corrupt president in US history expressing concerns about corruption abroad was a pretty hard pill to swallow, and he changed his talking points accordingly. But the fact they shifted so dramatically in such a short period of time suggests that the public will need to see the whistleblower’s complaint to figure out the truth of the matter.

China’s genocide against the Uyghurs, in 4 disturbing charts
EBay is suing Amazon for “racketeering” and anti-competitive practices
How sneakerheads ruined online shopping
The 4 Democrats running for president and everything else you should know about 2020
Charging patients just $10 more for medications leads to more deaths
Ben Jealous — a progressive running for Maryland governor — wants everyone to know he’s not a social...