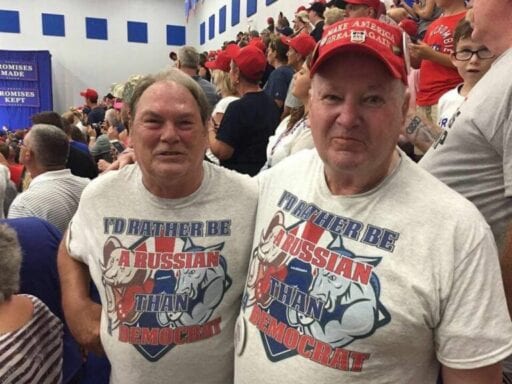 A monument to what political scientists call “negative partisanship,” one of the most important phenomena of our political time.

Sometimes there are images that so perfectly encapsulate a moment in time that all you can do is marvel. They’re the kinds of things that will show up in history textbooks, the kind of thing that high school students will look at when they’re trying to understand a previous era.

I think Cleveland.com reporter Jeremy Pelzer has taken just one of those images: a photo of two men at a Trump rally in Ohio on Saturday night wearing shirts that say “I’d rather be a Russian than a Democrat.”

These men, named James T. Alicie and Richard M. Birchfield, are a perfect encapsulation of the way Donald Trump has transformed the Republican Party in his image — abandoning its traditional positions on issues ranging from Russia to trade in favor of Trump’s positions on these issues. The photo is also an extremely clear way of understanding how deep hatred of Democrats is warping the Republican Party, part of a phenomenon political scientists call “negative partisanship.”

But before the science, the photo:

This about sums up the Republican party right now. pic.twitter.com/Kh1G3QocZD

There’s a reason Smith’s tweet got retweeted nearly 9,000 times and why the original photo was on the front page of Reddit. The idea that Republicans would be willing to side with Russia — which is widely believed to have meddled in the 2016 election to help Trump get elected — seems like a parody of the way Republicans think. Yet here it is, printed on a T-shirt spotted at a Trump rally.

This attitude — hatred of the other party above all else — is at the heart of so-called “negative partisanship,” a concept that Georgetown University’s Jonathan Ladd defines as “the tendency to vote for a party not mainly because you like it, but because you are repulsed by the other major party.” This phenomenon, he explains, is why Republican leaders and voters were able to get past their policy disagreements with Trump and vote for him: They’d rather have a Republican in office, however unorthodox and unqualified, than any kind of Democrat.

The crucial feature about negative partisanship is that it isn’t really about policy; it’s about identity. Negative partisanship becomes really powerful, political scientists Alan Abramowitz and Steven Webster write, when “supporters of each party perceive supporters of the opposing party as very different from themselves in terms of their social characteristics and fundamental values.” The other party is your cultural enemy, hostile to people “like you,” and therefore must be defeated at all costs — even if, as in this instance, it means siding with a foreign power.

When negative partisanship is strong, Republicans are willing to believe the worst about Democrats — and rationalize away any sins committed by Republicans. Hence why, over the course of four years, you go from Republican voters enthusiastically backing Mitt Romney — who called Russia America’s “No. 1 geopolitical enemy” — to the vast majority of them supporting Donald Trump through the Russia scandal.

You can see this effect in the polling. Since Trump’s rise, the percentage of Republicans reporting favorable views of Vladimir Putin has roughly tripled:

You might also note that Democrats have developed a more negative view of Putin over time. That’s because they’re no less prone to negative partisanship, intrinsically, than Republicans.

The vast majority of them will almost certainly support whomever the Democratic Party nominates for president in 2020, be it a relative centrist like former Vice President Joe Biden or a literal socialist like Sen. Bernie Sanders — because they hate Trump so profoundly that they’ll vote for anyone to replace him.

But no Democrat is currently the subject of an FBI investigation into alleged collusion with a hostile foreign power to affect a US election. Under these circumstances, the partisan stars have aligned such that Republicans are dismissing what’s shaping up to be the biggest political scandal since Watergate — and embracing Vladimir Putin even as he’s already begun to meddle in the 2018 midterm elections.