Trump’s response to impeachment: attacking the late husband of a pro-impeachment Democrat 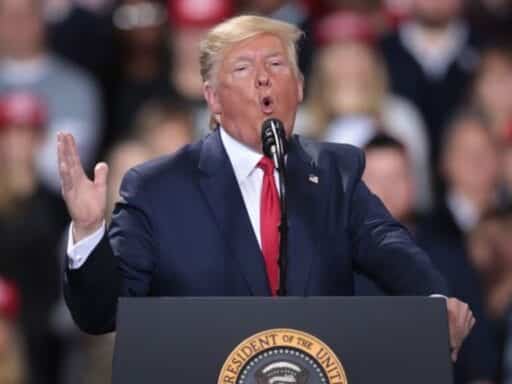 Speaking in Michigan as the House impeached him, Trump’s response was even worse than could’ve been imagined.

President Donald Trump’s response to the House of Representatives approving two articles of impeachment against him was in some respects even uglier than could’ve reasonably been anticipated. And given Trump’s track record, that’s saying something.

At the exact moment that the House approved the first article of impeachment, Trump was 600 miles away at a rally in Battle Creek, Michigan, telling a relatively innocuous, absurd tale he’s repeatedly told about how the military’s stealth planes are literally invisible.

I’m case you’re we’re wondering what Trump was saying at the exact moment they reached 216 votes for impeachment, it was another insane story about how he thinks stealth fighters are actually invisible. pic.twitter.com/IPlRHinz2m

Things took a darker turn from there, however. Instead of backing away from the conspiracy theories about the Bidens that are at the heart of the impeachment inquiry, Trump leaned into them, at one point claiming that if he did what the Bidens has done, “they’d bring the electric chair back.” Though that said more about his sense of victimization by House Democrats, its underlying assumption is that Joe Biden and his son Hunter did something criminal. But the bad optics of Hunter Biden serving in a lucrative position on the board of a Ukrainian gas company at the same time as his father was involved in Ukraine policy aside, there’s not a shred of evidence supporting Trump’s claims.

Trump basked in “lock her up!” chants directed at Hillary Clinton, and suggested she might end up behind bars yet. (The crowd also directed “lock her up” chants at House Speaker Nancy Pelosi earlier in the night, when Vice President Mike Pence was on stage.) He heaped scorn on the Democrat who oversaw the House Intelligence Committee impeachment hearings, Adam Schiff, calling him “not the best looking guy I’ve ever seen,” and on former FBI Director James Comey, saying “Did I do a great job when I fired his ass?”

But the lowest moment of the night came when Trump attacked Debbie Dingell, a Democratic congresswoman from the state he was speaking in, for voting in favor of impeachment. He even went as far as to suggest her husband, the late World War 2 veteran and former Rep. John Dingell (D-MI), whose seat she now holds, is in hell.

Trump began his attack on Dingell by suggesting she owed him something for allowing her husband to have a state funeral after he passed away earlier this year. He claimed Dingell called him and thanked him.

“‘He’s looking down, he’d be so thrilled. Thank you so much sir,’” Trump said, paraphrasing Debbie, before going on to suggest that heaven is not where John Dingell ended up. “I said, ‘Don’t worry about it.’ Maybe he’s looking up — I don’t know.”

The response of Trump’s crowd to those comments indicated it may have been a bit much even for them.

After the rally, Debbie Dingell responded by tweeting about how hurtful Trump’s comments are to her as she deals with the first holiday season following her husband’s passing.

Mr. President, let’s set politics aside. My husband earned all his accolades after a lifetime of service. I’m preparing for the first holiday season without the man I love. You brought me down in a way you can never imagine and your hurtful words just made my healing much harder.

Dingell wasn’t the only woman Trump targeted with comments that were in extremely poor taste. Early during his speech, after protesters unfurled a banner that read “DON THE CON. YOU’RE FIRED!” Trump responded by calling a woman protester “a real slob” and lamented that security guards weren’t rougher with her while kicking her out of the arena.

Trump disses a woman protester: “There is a slob, there is a real slob … She will get hell when she comes back home with mom.”

Trump then laments that security didn’t rough her up as she was getting kicked out. pic.twitter.com/sIFZfg18LQ

When he wasn’t on the attack, Trump tried to spin becoming the the third president in American history to be impeached, touting the fact that not a single House Republican voted in favor of impeachment. He claimed that the “lawless partisan impeachment is a political suicide march for the Democrat party,” even though a Fox News poll that was released on Sunday showed a majority of registered voters favoring the course of action the House took on Wednesday.

Trump also played the victim, whining about how hard impeachment has been on his family.

Trump’s speech, which was more than two hours in length, showed that he’s not repentant about being impeached. Coming as it did a day after he sent Pelosi a rambling, angry letter about the impeachment vote, it indicated he’s not dealing well with the strain.

But even though a Senate trial is now officially looming, Trump if anything escalated the ugliness. And why not? After all, unless Republicans suddenly become bothered by his bad behavior — and there’s no indication they will — he has little reason to fear becoming the first president to be removed from office.

Why millennials are the “death positive” generation
Kanye’s Jesus Is King feels unfinished. But it’s still worth hearing.
The debate around remote voting in the House, explained
Joe Biden wins the Arkansas Democratic primary
The woman who helped change how America thinks about the death penalty is not done yet
The fight over reopening churches reaches the Supreme Court