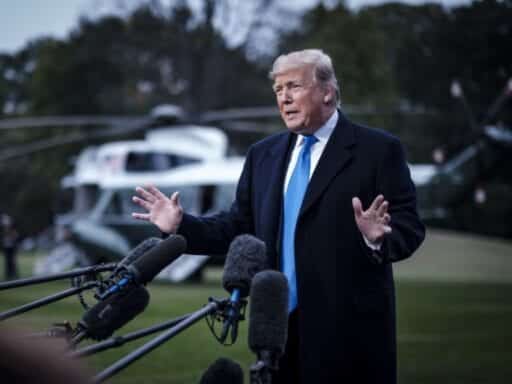 Trump has blamed mental health, video games, and security for mass shootings. But not guns.

After a mass shooting, President Donald Trump will say anything to avoid acknowledging the real problem.

Anything but the one thing that’s consistent in all these shootings — access to a gun.

Americans have become acutely aware of this problem over the past several years as we continue seeing a regular spate of mass shootings — one that no other developed nation has to deal with.

There are many things that make the US different from these countries. But it’s not mental health issues, video games, lacking security, or even the death penalty (at least in the way that Trump is suggesting).

It’s guns. America has far weaker gun laws, and far more guns, than any of these other countries. That makes it so just about anyone with bad intentions in the US can pick up a firearm and kill people with it.

Trump is ignoring that problem.

Trump’s many scapegoats after mass shootings

After the Parkland, Florida, school shooting that killed 17 in February, Trump first pointed to mental health issues. His first speech in response to Parkland never mentioned guns or firearms besides references to “gunfire” in describing the shooting, and instead focused on vague claims that the US needs to do more about mental health — suggesting the Parkland shooter was mentally ill.

Mental health is not what makes America uniquely vulnerable to gun violence. As my colleague Dylan Matthews explained, people with mental illnesses are more likely to be victims, not perpetrators, of violence. And Michael Stone, a psychiatrist at Columbia University who maintains a database of mass shooters, wrote in a 2015 analysis that only 52 out of the 235 killers in the database, or about 22 percent, had a mental illness. “The mentally ill should not bear the burden of being regarded as the ‘chief’ perpetrators of mass murder,” Stone concluded. Other research has backed this up.

After Parkland, Trump also blamed video games, claiming that he’s “hearing more and more people say the level of violence on video games is really shaping young people’s thoughts.” There is significant debate among researchers about whether video games cause more aggressive behavior, but the link, if one exists, seems weak enough that studies have produced contradictory findings. And other developed countries have violent video games and still do not experience anything close to the level of gun violence that the US does.

Trump has also focused a lot on arming more people, tweeting that armed school staff would be a “GREAT DETERRENT!” There is no research to support this. In fact, the research we do have suggests that this would make the problem worse: It’s loose access to guns that makes it so easy for anyone with violent intent in America to pick up a firearm and kill other people, and adding more guns to the environment only makes that problem worse.

Along the same lines, Trump initially reacted to the Pittsburgh synagogue shooting, which killed 11 over the weekend, by arguing that the synagogue needed armed security. Asked about gun laws, Trump said, “If they had some kind of protection inside the temple, maybe it could have been a very much different situation.”

But armed police officers did respond to the shooting, and four of them were shot. This isn’t, based on the data, abnormal: The FBI’s analysis of active shooters between 2000 and 2013 found, “Law enforcement suffered casualties in 21 (46.7%) of the 45 incidents where they engaged the shooter to end the threat.” These are people trained to do this kind of thing full time, and nearly half of incidents resulted in at least one officer being wounded or killed.

The call for widespread armament assumes that these shootings are inevitable, and our only sure way of responding to them is to arm more people so we can protect ourselves when such massacres occur. But developed nations around the world avoid the regular tide of mass shootings — largely because they have fewer, not more, guns and stronger gun laws, which make it difficult for would-be perpetrators to get a firearm.

In response to the Pittsburgh shooting, Trump also expressed a desire to “bring the death penalty into vogue.”

The research, however, has repeatedly found that the death penalty is not an effective way to stop or deter crime. In a summary of a 2009 survey, the Death Penalty Information Center, a top nonpartisan source for information about capital punishment, pointed out that “[e]ighty-eight percent of the country’s top criminologists do not believe the death penalty acts as a deterrent to homicide” and “87% of the expert criminologists believe that abolition of the death penalty would not have any significant effect on murder rates.”

Besides, most other developed nations have abolished the death penalty. Yet they don’t face the same regular occurrence of mass shootings or anywhere near the same level of gun violence that the US does.

So what makes America so different from other developed countries? Easy access to guns.

It comes down to two basic issues.

First, America has uniquely weak gun laws. Other developed nations at the very least require one or more background checks and almost always something more rigorous beyond that to get a gun, from specific training courses to rules for locking up firearms to more arduous licensing requirements to specific justifications, besides self-defense, for owning a gun. In the US, even a background check isn’t a total requirement; the current federal law is riddled with loopholes and snared by poor enforcement, so there are many ways around even a basic background check. There are simply very few barriers, if any, to getting a gun in the US.

Second, the US has a ton of guns. It has far more than not just other developed nations but any other country, period. Estimated for 2017, the number of civilian-owned firearms in the US was 120.5 guns per 100 residents, meaning there were more firearms than people. The world’s second-ranked country was Yemen, a quasi-failed state torn by civil war, where there were 52.8 guns per 100 residents, according to an analysis from the Small Arms Survey.

Both of these factors come together to make it uniquely easy for someone with any violent intent to find a firearm, allowing them to carry out a horrific shooting.

This is born out in the statistics. The US has nearly six times the gun homicide rate of Canada, more than seven times that of Sweden, and nearly 16 times that of Germany, according to United Nations data for 2012 compiled by the Guardian. (These gun deaths are a big reason America has a much higher overall homicide rate, which includes non-gun deaths, than other developed nations.)

The research, compiled by the Harvard School of Public Health’s Injury Control Research Center, is also pretty clear: After controlling for variables such as socioeconomic factors and other crime, places with more guns have more gun deaths. Researchers have found this to be true not just with homicides but also with suicides (which in recent years were around 60 percent of US gun deaths), domestic violence, and violence against police.

Or in the case of Pittsburgh, America does not have a monopoly on bigots. What is unique about the US is that it makes it so easy for these bigots to obtain a gun.

Researchers have found that stricter gun laws could help. A 2016 review of 130 studies in 10 countries, published in Epidemiologic Reviews, found that new legal restrictions on owning and purchasing guns tended to be followed by a drop in gun violence — a strong indicator that restricting access to guns can save lives. A review of the US evidence by RAND also linked some gun control measures, including background checks, to reduced injuries and deaths.

That doesn’t mean that bigots and extremists will never be able to carry out a shooting in places with strict gun laws. Even the strictest gun laws can’t prevent every shooting.

And guns are not the only contributor to violence. Other factors include, for example, poverty, urbanization, alcohol consumption, and the strength of criminal justice systems. But when researchers control for other confounding variables, they have found time and time again that America’s loose access to guns is a major reason the US is so much worse in terms of gun violence than its developed peers.

So America, with its lax laws and abundance of firearms, makes it uniquely easy for people to commit massacres. Until the US confronts that issue, it will continue seeing more gun deaths than the rest of the developed world.

You’re single. You live alone. Are you allowed to have a coronavirus buddy?
“Heritage travel” is surging in the era of DNA testing. It has a special significance for black Amer...
A deleted chapter from Malcolm X’s autobiography has resurfaced
Facebook bans blackface and certain anti-Semitic conspiracy theories
Trump is looking for a new way to cut Medicaid — without Congress
President Trump says Republicans should 'stop wasting their time on immigration' until aft...