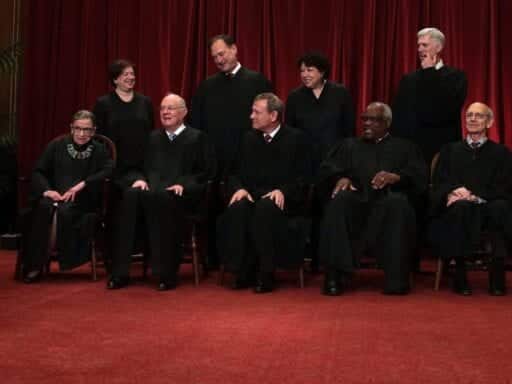 All four of Trump’s top picks have frequently defended the rights of religious institutions.

Discussion of Trump’s pick so far has largely centered around certain hot-button political issues, particularly abortion. While Justice Kennedy generally ruled in favor of abortion rights, many of Trump’s potential Supreme Court nominees have been outspoken opponents of abortion, and a Kennedy-less court has the potential to eventually overturn Roe v. Wade, if the appropriate case is presented.

But a no-less vital issue at stake when assessing the future of the Supreme Court is religious liberty. In recent years, a handful of Supreme Court cases have started to redefine the boundaries of what religious liberty means in America. In Burwell v. Hobby Lobby, the Court ruled 5-4 that a closely-held, for-profit Christian company should not have to provide its employees with insurance that covered birth control. The Court ruled 7-2 in Trinity Lutheran v. Comer that a church that wanted to build a playground should not be ineligible for state funds to do so. In this year’s Masterpiece Cakeshop case, the court ruled 7-2 in favor of a baker who declined to make a wedding cake for a same-sex couple.

The decisions made in these landmark cases may only at as a preview of a broadening of religious liberties through the court, especially with a second Trump-appointed justice on the bench.

All four of Trump’s potential Supreme Court nominees are outspoken advocates of religious liberty, and have frequently ruled in favor of extremely broad definitions of what that liberty should look like in practice.

All of Trump’s picks are outspoken religious liberty advocates

In some way or another, all four of Trump’s picks have made religious liberty cases cornerstones of their judicial careers so far. For example, Kethledge, who currently serves as a circuit judge of the United States Court of Appeals, recently argued that a church-run restaurant in Ohio should be exempt from federal labor laws after a pastor “spiritually coerced” parishioners to work there without pay.

Another frontrunner, Kavanaugh, a judge on Court of Appeals for the District of Columbia, was the former chair of the Federalist Society’s Religious Liberty practice group and wrote a number of Supreme Court amicus briefs pro bono for several religious liberty cases.

Coney Barrett, a Seventh Circuit judge on the Court of Appeals, has defended the rights of a Jewish day school that fired a sick teacher on the grounds that religious institutions are not bound by the Americans With Disabilities Act.

And Hardiman, a judge on the Third Circuit, strongly dissented in a Pennsylvania case involving a woman and her son who had been barred from reading the Bible during the child’s school “show and tell,” arguing that they had the right to do so.

In other words, it’s extremely likely that any of the four Supreme Court nominees Trump chooses will be a vigorous and consistent voice in favor of a broad interpretation of religious liberty; one that prioritizes the rights of individual believers (and religious institutions) to act in accordance with their faith as much as possible, even when that faith comes in conflict with, say, wider American policies on health care or employment.

In recent years, nearly all of the major religious liberty Supreme Court cases — the Hobby Lobby, Masterpiece Cakeshop, and Trinity Lutheran cases — have been decided in favor of religious expression (although it’s worth noting that the Masterpiece Cakeshop ruling was extremely narrowly written, and explicitly rejected the notion it should be taken as precedent for other cases involving anti-LGBTQ discrimination).

The 2017 addition of Justice Neil Gorsuch — Trump’s previous Supreme Court pick, and a lifelong religious liberty advocate — has already started the process of stacking the court with judges sympathetic to religious liberty issues. But Trump’s second pick — whether Kavanaugh, Kethledge, Barrett, or Hardiman — will solidify it.

It is extremely likely that a Supreme Court with Trump’s picks could take active steps to roll back abortion access, even if it does not overturn Roe v. Wade outright. But it’s worth recognizing that, whoever Trump picks on Monday, the result will have a significant and decades-long effect on the definition of religious freedom in America.