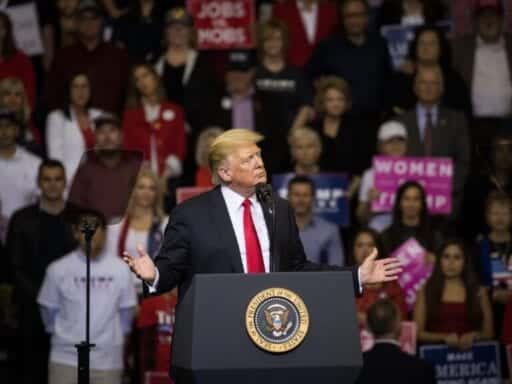 President Donald Trump didn’t have much to say about Sen. Ted Cruz at his rally for Cruz’s reelection in Houston, Texas, on Monday, but he did repeat a tax plan to cut rates for middle-class Americans that he’s seemingly invented out of thin air.

Trump said Congress would be putting forward a 10 percent tax cut for the middle class next week — a tax cut he suddenly started touting over the weekend and that actual members of Congress don’t seem to know anything about.

Congress is also on recess next week and doesn’t plan on coming back until after the midterm elections in November.

These proposed tax cuts have perplexed Washington ever since Trump first mentioned them over the weekend. While one Republican congressional aide told Vox individual lawmakers have been musing the idea of additional tax cuts, there isn’t a plan in place or under discussion. Trump, when told Congress was on recess, told reporters a vote would happen after the elections.

House Speaker Paul Ryan’s office has referred all questions about the proposal to the White House. Rep. Kevin Brady (R-TX), the chair of the committee with purview over the nation’s tax code, was in the audience in Houston, but his committee staff could not offer any details on this proposal.

“There is continued interest in building on the success of the Tax Cuts and Jobs Act and constantly improving the tax code for hardworking families and America’s small businesses,” Rob Damschen, the Republican Ways and Means spokesperson, told Vox, referring any questions on the actual details to the White House.

Trump also lied about the tax cuts that he actually did sign into law late last year, falsely claiming that Republicans eliminated the estate tax — they did not, although they changed the law so that fewer families would have to pay the tax.

That tax law, which gave a massive permanent tax break to corporations as well as some temporary cuts on the individual side, is among the few Republican legislative accomplishments the GOP has to tout in the 2018 midterms.

Fifteen days from Election Day, Trump’s presence was meant to energize the base behind Cruz, who is facing a surprisingly competitive challenge from Democratic Rep. Beto O’Rourke.

Trump’s closing argument for Cruz hit all his favorite talking points. He called undocumented immigrants criminals, declared himself a proud nationalist, cheered on Supreme Court Justice Brett Kavanaugh, and called Democrats names — and touted a seemingly made-up tax break that no one can explain.