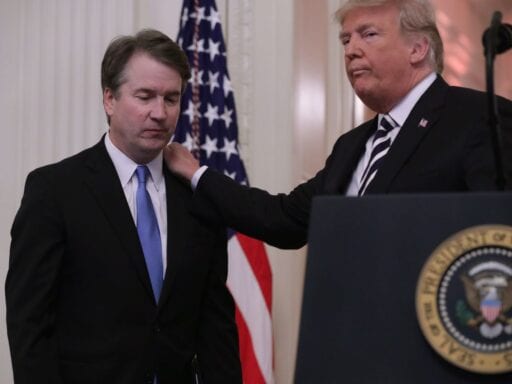 Trump wants to remind loyalists that, if he wins in November, they’ll get more judges who will enact Republican policy.

President Trump released a list of 20 names on Wednesday, pledging that he will use these names — plus a longer list he’s already released — to select his next Supreme Court nominee if he has the opportunity to do so.

In 2016, Trump released a list of 11 candidates for a seat on the Supreme Court as part of an attempt to shore up Republican voters who were unsure that Trump would appoint loyal conservatives to the federal bench.

Many Republicans, including some of the party’s top leaders, believe that this tactic paid off. In a 2019 address to the Federalist Society, an influential conservative group that plays a significant role in selecting Trump’s judicial nominees, Senate Majority Leader Mitch McConnell (R-KY) claimed that “the single biggest issue that brought nine out of 10 Republican voters home to Donald Trump … was the Supreme Court.”

That’s almost certainly an exaggeration. But the fact remains that top Republicans believe that Trump stumbled upon an effective political strategy in 2016, so it’s smart politics for him to repeat this play in 2020. And, as a bonus, Trump released his new list on the same day that veteran journalist Bob Woodward released new audio showing that Trump intentionally deceived the American people about the dangers of Covid-19. The Supreme Court list could potentially distract from that damning news.

So this is primarily a political move intended to shore up Trump’s base.

That said, the Trump White House and his allies in the Senate have spent years preparing for the next Supreme Court vacancy.

The judicial selection process may be the one professional and highly competent operation in this administration. Trump has filled the bench with fairly young, impressively credentialed ideologues who will reliably cast very conservative votes if appointed to the Supreme Court, and his Supreme Court shortlist reflects that work. Half of the names that Trump just announced are people he previously appointed to a lower court, and several more are individuals he’s appointed to non-judicial roles.

And it doesn’t actually matter all that much which specific name Trump chooses from his list — or whether he ultimately decides to go off-list. Though Trump has kept his promise to only name Supreme Court justices from a pre-released list, he frequently adds new names to it. Neither of Trump’s Supreme Court appointees, Neil Gorsuch and Brett Kavanaugh, was on the original list Trump first released in 2016, but were added in subsequent iterations.

What all the names on the list have in common — both old and new — is that they were vetted by Trump’s team (and often by the conservative Federalist Society) to ensure that they are reliable conservatives.

That said, there is one important divide among the names on Trump’s list.

Some, such as former Solicitor General Paul Clement or Fourth Circuit Judge Allison Jones Rushing, are solid conservatives who aren’t known for over-the-top, Trumpy rhetoric. Others, such as Sens. Ted Cruz (R-TX), Josh Hawley (R-MO), and Tom Cotton (R-AR) are politicians who spent their time in Congress flaunting their conservative bona fides and enraging Democrats. Still others, such as Fifth Circuit Judges James Ho and Kyle Duncan, are sitting judges who take the same trolly approach as Cruz, Hawley, and Cotton, but do so from the bench.

The biggest mystery, in other words, is not what the next potential Trump nominee to the Supreme Court might believe, it’s whether Trump would pick someone with a professional demeanor — or choose a professional troll.

The 20-name list Trump released on Wednesday augments an existing list of 25 names that he has released gradually.

Most of the names on both lists possess many of the elite credentials one would expect to find in a Supreme Court nominee. Close to half of the individuals on the new list clerked on the Supreme Court shortly after graduating from law school. And, though the lists include a few politicians like the three senators mentioned above and Kentucky Attorney General Daniel Cameron, both lists are dominated by sitting judges — including many Trump appointees.

Because so many Trump appointees make the list, many of these judges have not served long enough to develop substantial records on the bench. But several of the names on Trump’s new list will raise deep concerns among Democrats.

Judge James Ho, for example, has spent his not even three years on the United States Court of Appeals for the Fifth Circuit writing opinions that read like something published by Breitbart. His very first judicial opinion was a sweeping attack on campaign finance laws — and it included an entirely gratuitous swipe at the Affordable Care Act. Ho argued that “if you don’t like big money in politics, then you should oppose big government in our lives,” and he cited the Supreme Court’s decision largely upholding Obamacare to drive home his point.

Ho has also railed against the “moral tragedy of abortion” in an opinion where he accused a fellow federal judge of retaliating “against people of faith for not only believing in the sanctity of life—but also for wanting to do something about it.”

Ho’s Fifth Circuit colleague Kyle Duncan, meanwhile, spent much of his pre-judicial career litigating against LGBTQ rights and the right to vote. As a judge, he’s best known for an opinion where he spent more than 10 pages explaining why he insists on referring to a transgender woman using masculine pronouns.

Ninth Circuit Judge Lawrence VanDyke is a particularly surprising addition to Trump’s list because VanDyke’s nomination to the federal bench was panned by the American Bar Association due to concerns that VanDyke is too lazy to do the job.

“Mr. VanDyke’s accomplishments are offset by the assessments of interviewees that Mr. VanDyke is arrogant, lazy, an ideologue, and lacking in knowledge of the day-to-day practice including procedural rules,” the ABA explained in a scathing letter deeming him unqualified for the federal bench. The ABA’s investigation found that VanDyke “lacks humility, has an ‘entitlement’ temperament, does not have an open mind, and does not always have a commitment to being candid and truthful.”

It’s unclear why Trump loyalists would want to see someone appointed to the Supreme Court who may lack the temperament and the work ethic to do the job well.

That said, VanDyke is an outlier on Trump’s list. For the most part, the nearly four dozen names Trump has suggested as possible Supreme Court nominees are diligent and highly talented lawyers. They just also happen to be lawyers who are eager to move the law sharply to the right.

The White House’s judicial selection process is the most professional operation in the Trump administration.

The name “Donald Trump” is practically synonymous with goonish incompetence. But Trump’s judicial selection operation is nothing like Donald Trump. It is both efficient and highly effective in identifying reliable conservative ideologues with sterling legal resumes.

In less than four years as president, Trump has appointed 201 lawyers to lifetime appointments on the federal bench, including 53 to powerful seats on the United States Courts of Appeal. By contrast, President Obama appointed only 55 appellate judges during his eight years as president.

One reason for this disparity is that Senate Republicans, led by McConnell, imposed a near-total blockade on appeals court confirmations during Obama’s final two years in the White House. That meant that Trump has effectively been able to fill all the appeals court vacancies that arose during his presidency plus nearly all the vacancies that should have been filled in Obama’s last two years in office.

Trump’s judges, moreover, are quite young. “The average age of circuit judges appointed by President Trump is less than 50 years old,” the Trump White House bragged in November of 2019, “a full 10 years younger than the average age of President Obama’s circuit nominees.” And a large percentage of them have amassed impressive credentials such as Supreme Court clerkships and other government jobs of great influence.

All of this is a reason for liberals to be more afraid of Trump’s judges — and potential justices — than if Trump were picking undistinguished hacks to fill the bench. Judges of great ability are far more likely to find innovative ways to reshape the law than incompetents and mediocrities.

Moreover, Trump is filling the bench with some of the Federalist Society’s brightest minds at the very moment when the judiciary is gaining power relative to the other branches. As I wrote several months ago in a piece laying out Trump’s impact on the bench:

In an age of legislative dysfunction, whoever controls the courts controls the country. In the past decade or so — or more precisely, since Republicans took over the House in 2011 — Congress has been barely functional. You can count on one hand — and possibly on just a few fingers — the major legislation it has enacted.

Judges, by contrast, have become the most consequential policymakers in the nation. They have gutted America’s campaign finance law and dismantled much of the Voting Rights Act. They have allowed states to deny health coverage to millions of Americans. They’ve held that religion can be wielded as a sword to cut away the rights of others. They’ve drastically watered down the federal ban on sexual harassment. And that barely scratches the surface.

If Trump gets to replace a liberal justice, this practice of judicial policymaking will only accelerate. Environmental regulations are likely to be dismantled en masse. Voting rights will be hollowed out even more. Obamacare could be struck down. And, perhaps most significantly, purely partisan Republican arguments will gain even more purchase in the Supreme Court.

Anyone Trump names to the Supreme Court, if Trump’s allowed to do so, is likely to push the law relentlessly to the right.

Civil rights leaders are still fed up with Facebook over hate speech
Are coronavirus cases in the US actually going down? Here’s what we know.
Report: Nonwhite jail officers were not allowed to guard George Floyd’s killer
10 facts about school reopenings in the Covid-19 pandemic
The US just punished Saudi Arabia over Khashoggi — in a very small way
Why the new Covid-19 variants could kill more people, in 2 charts