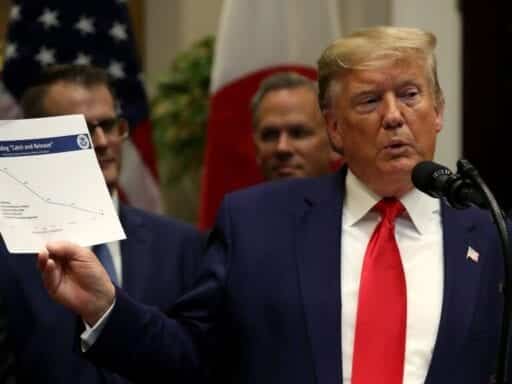 Trump added layer upon layer of exaggeration until a fib became one of his most absurd lies.

On Monday, President Donald Trump told an especially silly lie about the state of the United States military when he took office. But the way this particular lie evolved over the past month says something about how fast and loose Trump is with reality more broadly.

During a press conference, Trump — rambling on about his decision to withdraw troops from Syria — took credit for rejuvenating the military, but in so doing rewrote history by claiming that Obama literally left it with no ammunition. His source for this claim was an unnamed “top general.”

“When I took over our military, we did not have ammunition,” Trump said. “I was told by a top general, maybe the top of them all, ‘Sir, I’m sorry sir, we don’t have ammunition.’ I said, I will never let that happen to another president.”

TRUMP: “When I took over our military, we did not have ammunition. I was told by a top general, maybe the top of them all, ‘Sir, I’m sorry sir, we don’t have ammunition.’ I said, I will never let that happen to another president.” pic.twitter.com/Rnmv7i17Nj

In reality, the United States spent $611 billion on the military in 2016. Rep. Ruben Gallego (D-AZ), a veteran who serves on the House Armed Services Committee and was first elected to Congress in 2016, noted Trump’s comments were “not true.”

“I get briefings as a member of the House Armed Services Committee on our munitions stockpile all over the world,” Gallego tweeted. “We have never run out of ammunition.”

Of course, a full fact-check isn’t needed to see Trump’s comment as the absurdity that it is. But it is interesting to trace how Trump has embellished this particular tall tale since he first told it on September 16.

On that day, Trump told reporters in the Oval Office that when he took office, General Jim Mattis — his future defense secretary, and presumably the “top general” Trump referred to on Monday — told him the country was “very low on ammunition.”

“You know, when I came here three years ago almost, General Mattis told me, ‘Sir, we’re very low on ammunition. I said, ‘That’s a horrible thing to say,’” Trump said. “We were in a position where with a certain country — I won’t say which one — we may have had conflict. And he said to me, ‘Sir, if you could, delay it, because we’re very low on ammunition.’ And I said, ‘You know what, general, I never want to hear that again from another general.’”

Trump puts words in Mattis’s mouth, says that when he took office, Mattis told him, “‘Sir, we’re very low on ammunition’ … and I said, you know what? General, I never want to hear that again from another general. Not president should ever, ever hear that statement.” pic.twitter.com/u8kSSqT9bb

Note how that tale was slightly less outlandish than the one Trump told Monday. It is true that President Obama slimmed down the armed forces, a decision that was viewed unfavorably by a large swath of the troops when he left office. It’s also true that Trump has increased military spending. So, charitably speaking, there is a kernel of truth to what Trump was saying.

But within hours, Trump starting pumping up whatever kernel of truth existed until it was no longer recognizable.

Trump held a rally on September 16 in Rio Rancho, New Mexico. There, he told the same story he told in the Oval Office earlier in the day, but in a slightly exaggerated form. Instead of being “very low on ammunition,” in the new telling, the country had “very little, slash, no ammunition” when he took office.

Trump claims that the United States had “very little, slash, no ammunition” when he took office. Seriously. He wants his fans to believe this. pic.twitter.com/P30B8m9Sxh

Four days later, the story had been exaggerated once again. During a September 20 news conference, Trump claimed the military “didn’t have ammunition” when he took office — the same lie he told on Tuesday.

Trump lies and says the military “didn’t have ammunition” when he took office pic.twitter.com/T6Vq5KqvAT

In sum, Trump started with an exaggerated story that was already absurd, but then gradually inflated it even more until the final product become one of his most outlandish lies. In this case, the subject matter is relatively trivial — nobody really believes the military was out of ammunition when he took office — but the chain of events illustrates how broken Trump’s truth barometer is, and serves as a disturbing reminder about how little the president’s word can be trusted on more important matters.

The comment about ammunition wasn’t even the only time Trump’s propensity for absurdity was on display during the Monday media availability. Trump closed things out by claiming that “my polls went up I think 17 points in the last two or three days.” In fact, Trump’s approval rating has barely budged from being 12 points underwater.

147 Republican lawmakers still objected to the election results after the Capitol attack
A plan to reverse the war on drugs, from the Vietnam War era
At last, a climate policy platform that can unite the left
The House inquiries into the secret Trump-Putin talks are (slowly) taking shape
Fauci predicts over 100,000 Covid-19 deaths in the United States
Thousands of Wisconsin ballots could be thrown out because they don’t have a postmark