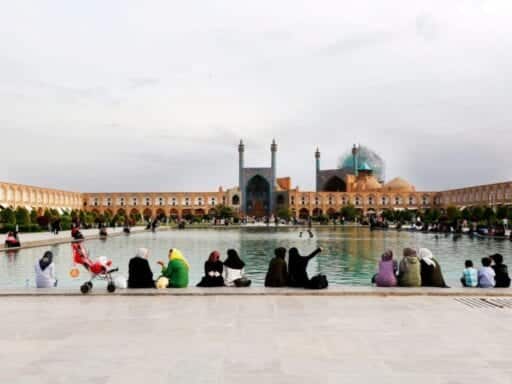 President Donald Trump has spent the past two days threatening to commit war crimes in Iran.

The threats started on Saturday evening when he tweeted a vow to respond to Iranian retaliation for Qassem Soleimani’s killing with an attack on “52 Iranian sites,” including locations “important to Iran & the Iranian culture.”

It’s not clear exactly what these cultural sites are — it could be anything from the ancient Persian ruins at Persepolis to a random theater in Tehran. But no matter what the president wants to target specifically, he’s threatening to hit some kind of location frequented by civilians with no military value, practically the textbook definition of a war crime.

Secretary of State Mike Pompeo tried to walk these comments back during a Sunday morning TV appearance, saying any American military action would be “consistent with the rule of law.” But that evening, President Trump directly contradicted him, telling the New York Times’ Maggie Haberman that he sees attacks on Iran’s cultural sites as legitimate retaliation for Iran’s support of anti-American terrorism.

“They’re allowed to use roadside bombs and blow up our people. And we’re not allowed to touch their cultural site?” Trump asked rhetorically. “It doesn’t work that way.”

Some kind of Iranian retaliation for the Soleimani assassination is all but inevitable, which means Trump will likely have an opportunity to order the US military to act on his violent vision. Whether or not it will happen is a separate question: officers are legally obligated not to act on unlawful orders, and there is reportedly strong resistance in the Pentagon to targeting Iranian cultural sites.

More broadly, the threat illustrates the way Trump thinks about both the war with Iran and the world more broadly. The president seems to believe, very fundamentally, that concerns about human rights and international law are pointless constraints on American power — that winning conflicts requires being harsher and more brutal than your opponents.

Why attacks on Iran’s cultural sites would be war crimes

During the Islamic State’s 2014-2015 heyday, the group defaced and demolished historical sites across its territory in the two countries. The group attacked old churches, biblical tombs, and entire ancient cities in an attempt to underscore the Islamic religious character of its would-be state and cover up its looting of artifacts for profit.

At the time, ISIS’s actions were widely seen as an unambiguous war crime. The 1949 Geneva Convention prohibits “any acts of hostility directed against the historic monuments, works of art or places of worship which constitute the cultural or spiritual heritage of peoples”; the 1954 Hague Convention on the treatment of “cultural property” during wartime contains a nearly identical provision. The United States has long taken these obligations seriously; during ISIS’s rampage, the Obama administration was “among the harshest critics” of its destruction of antiquities, per the New York Times.

Like Iraq and Syria, Iran is full of valuable historical sites. Among the most valuable are the ruins at Persepolis, the ancient capital of the Achaemenid Empire built in 518 BCE. It’s a UN-recognized World Heritage Site, widely seen as one of the most important ancient locations in the world. If Trump truly wants to follow in ISIS’s footsteps, Persepolis would almost certainly be high on the list of targets.

But we don’t know for sure that Trump is threatening targeting antiquities. Sites “important to the Iranian culture” could also refer to contemporary art installations or even something as mundane as a popular shopping mall or theater. Iran is a big and diverse country; there is a pretty large number of places that could possibly qualify as culturally significant. Trump has offered no elaboration on specifics; it’s possible that even he doesn’t know what he’s threatening to attack here (there haven’t been any official statements from the Pentagon clarifying the president’s intent).

Regardless, there’s no doubt that any attack on a primarily cultural site would be a war crime. One of the central ideas of the law of war is the principle of distinction: that combatants distinguish between military and civilian targets and only attack the former. Legitimate “military objectives,” as defined by the 1977 Additional Protocol to the Geneva Conventions, “are limited to those objects which by their nature, location, purpose or use make an effective contribution to military action.”

Cultural sites do not meet this standard, by definition: There is no world in which anything plausibly understood as a “cultural site” has any real military value. The very logic of Trump’s tweet — don’t mess with America, Iran, or else we’ll destroy something you love — betrays that he’s not thinking of a legitimate military target.

There is no honest way to describe what Trump is tweeting other than an open threat to commit war crimes.

Experts of all stripes believe that some kind of Iranian response to the killing of Soleimani is inevitable, as Iran will not let an attack of this magnitude go unanswered. Iran will give Trump a pretext to act on his threats to respond “disproportionately,” including the bombing of these unspecified cultural sites.

The big question then is whether Trump is serious.

On the one hand, the president has a long history of tweeting out bluster and then failing to follow through. On the other hand, the logic of the Soleimani hit itself (as described by Trump and top officials) can basically be described as “deterrence by escalation”: showing the Iranians that, if they hit us, we’ll hit back harder, thereby deterring them from hitting us. This requires the US to respond to the inevitable Iranian escalation with something even bigger than the killing of Iran’s most important general; attacks on the Iranian homeland, including major cultural sites, would certainly qualify.

If Trump does give the order, the US military will be in an extremely tough bind. While soldiers are expected to follow orders from the commander in chief, military law also explicitly holds that soldiers should not follow commands when they “knew the orders to be unlawful or a person of ordinary sense and understanding would have known the orders to be unlawful.” This is kind of a vague standard, but Trump’s Twitter threats seem to pretty much explicitly violate it.

“In general, there is just enough ambiguity that it’s unrealistic to expect military officers to disobey arguably unlawful orders,” explains Rosa Brooks, a Georgetown professor who studies the law of armed conflict. “But when the commander in chief decides to come right out and say that he’s considering an unlawful order, good news! No more ambiguity.”

For this reason, CNN reports, there’s a brewing resistance to Trump’s cultural sites threat in the Pentagon. Top military officials seem horrified by the thought of being ordered to do something so manifestly unlawful; it would force them to choose between committing war crimes and directly defying the commander in chief.

But the problem here goes deeper than one potential round of airstrikes.

Trump seems to believe, very deeply, that the United States shouldn’t have to adhere to the law of war. He has moved to steal Syria’s oil deposits, repeatedly loosened rules of engagement aimed at limiting civilian casualties, and pardoned three convicted war criminals. One of these criminals is Special Operations Chief Eddie Gallagher — a Navy SEAL who repeatedly fired on civilians and once fatally stabbed a captured teenager and texted friends photos of the body. Though Gallagher’s fellow soldiers hated him — one called him “evil” — Trump described him as “one of the ultimate fighters” and a “very tough guy.”

The basic idea here seems to be that America should be free to fight wars in the toughest manner possible to defeat its enemies. To defeat violent people, the logic goes, we need to be more violent than they are.

This is the logic of striking cultural sites as expressed by Trump to Haberman: “They’re allowed to use roadside bombs and blow up our people. And we’re not allowed to touch their cultural site?” But it’s also the overall logic of the killing of Soleimani and the Trump war with Iran: The only way to stop a bully is to hit them harder.

But the president’s definition of “harder” seems to admit no constraint by the law of war, rules the US helped write to make the world a more humane and better place. There is no limiting principle at work here; so long as Iran is willing to respond, which it (again) almost certainly is, the US needs to keep hitting back in more violent fashion. It’s an endless cycle, a self-propelling logic that would hurtle the US toward a full-scale war with Iran.

If the president really believes his own rhetoric, things could get really bad really quickly.

Infants and pregnant women will soon pay the price for Trump’s wall shutdown
What you’re feeling is grief
Saturday Night Live will not save you
Democratic Party leaders are “banging their head against the wall” after private meetings with Faceb...
Trump’s weekend rallies showed just how unhinged his campaign is
What Trump has done to the courts, explained