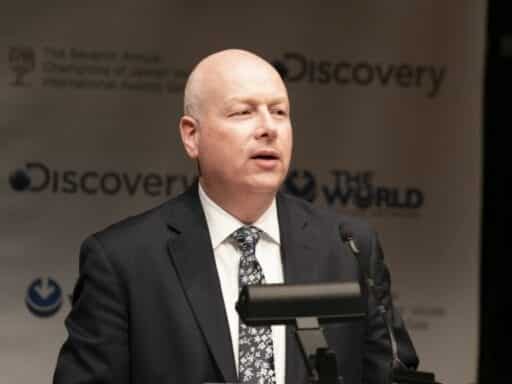 “Trump picked loyalists who knew little about the conflict to help resolve one of the most intractable conflicts in the world,” an expert said.

Jason Greenblatt, President Donald Trump’s special envoy for Middle East peace, is stepping down from his post — throwing even more doubt on whether the “deal of the century” between Israel and the Palestinians that Trump has been teasing for months will actually work.

Multiple news outlets reported Thursday that Greenblatt, whose previous job was as a real estate lawyer for the Trump Organization, planned to step down later this month after releasing a draft of the long-awaited “political” portion of the Middle East peace plan following Israel’s upcoming elections.

Trump confirmed the reports of Greenblatt’s departure shortly after in a pair of tweets in which he called the Middle East envoy “a loyal and great friend” whose “dedication to Israel and to seeking peace between Israel and the Palestinians won’t be forgotten.”

In a statement released by the White House, Greenblatt said he was “grateful to have been part of the team that drafted a realistic vision for peace, which has the potential to improve the lives of millions of Israelis, Palestinians and others in the region.”

But what that “realistic vision for peace” looks like — or whether the White House will actually release it in full within any of our lifetimes — has been an open question since the administration took power. Greenblatt has spent nearly three years working on it with senior White House adviser Jared Kushner and a few others in the administration, and we’ve yet to see the full fruits of their labor.

Now, with Greenblatt’s sudden departure, the prospects for a comprehensive peace plan seem even dimmer.

But Greenblatt’s effort was always an uphill battle. He came into the role with no foreign policy experience beyond holding staunch pro-Israel positions, and he was tasked with helping negotiate one of the world’s thorniest foreign policy challenges that successive US administrations have failed to solve.

Avi Berkowitz, a 30-year-old friend and adviser of Kushner’s who graduated from Harvard Law School in 2016, will take Greenblatt’s place (the State Department’s top Iran official, Brian Hook, will also pitch in).

Martin Indyk, who led peace deal efforts in the Obama administration, blasted the idea of Berkowitz taking the portfolio, calling it “a considerable downgrade in the position” in a tweet Thursday.

If Avi Berkowitz is ⁦@jdgreenblatt45⁩ ‘s replacement it’s a considerable downgrade in the position. He’s Kushner’s 29-year-old assistant. Nice guy but does not have the weight or experience of Trump’s former real estate lawyer. https://t.co/LYMcNzuncd

Other experts I spoke to, though, were less concerned about the staffing change.

“Greenblatt’s departure isn’t likely to have any real impact since the plan he and the administration were working on was always going nowhere,” Khaled Elgindy, an adviser to Palestinian leadership from 2004 to 2009, told me. “It matters even less who his replacement will be.”

Back in June, Kushner unveiled the first economics-focused part of the peace plan at a conference in Bahrain. Dubbed “Peace to Prosperity,” the plan was billed as “a vision to empower the Palestinian people to build a prosperous and vibrant Palestinian society.” The administration claimed it had “the potential to facilitate more than $50 billion in new investment over ten years.”

But critics slammed the proposal, likening it to a “real estate brochure” — complete with glossy promotional photos from Palestinian aid programs that the Trump administration has cut funding for. Zero Palestinian or Israeli officials attend the conference in Bahrain when it was rolled out.

Yet it’s unlikely that the political portion of the peace plan, which Greenblatt spearheaded, would be any more impressive or feasible. He, Kushner, and the Trump administration in general are strongly disliked by Palestinian leaders, who (understandably) see the administration as unfairly biased in favor of Israel. Indeed, since Trump announced the relocation of the US Embassy to Jerusalem in 2017, Palestinian officials have openly boycotted all talks with the administration.

And many experts point to Trump’s decision to appoint uninformed dilettantes like Kushner and Greenblatt to the high-level negotiating roles as one of the core failings of the administration’s efforts.

“Trump’s Mideast peace team was set up for failure because it lacked experienced diplomats with knowledge about the Israeli-Palestinian conflict,” Guy Ziv, an Israel expert at American University in Washington, DC, told me.

“Instead, Trump picked loyalists who knew little about the conflict to help resolve one of the most intractable conflicts in the world,” Ziv said, adding that the team’s makeup “undermined America’s traditional role as an honest broker, losing all credibility with the Palestinians.”

Although Trump says Greenblatt is merely “leaving to pursue work in the private sector,” Ziv notes that “[t]he timing of Greenblatt’s resignation, just weeks before the ‘deal of the century’ was to be unveiled, certainly makes it clear that Greenblatt had no faith that the administration’s peace plan would get anywhere.”

With Greenblatt at the helm, the chances of striking a deal were already close to zero. But with him gone — and someone even less experienced taking over — the likelihood somehow drops even lower.

Why Pete Buttigieg is dodging some of the media’s foreign policy questions
Spain’s socialist party wins election, but it will need help to form a government
Michelle Obama’s necklace makes her message clear: Vote.
Alpha takes a conventional boy-and-his-dog tale and does something wholly unexpected with it
Private prisons face an uncertain future as states turn their backs on the industry
Irony is dead: The Trump sons are doing everything possible to make corruption a major 2020 issue