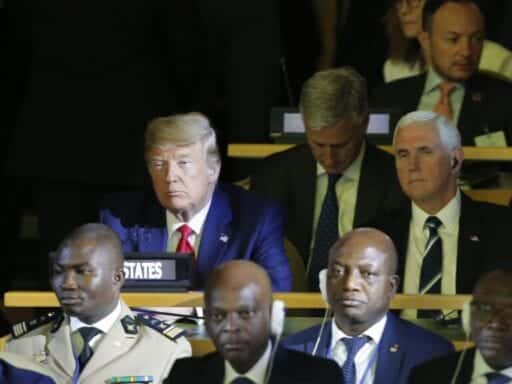 The president responded to the teen climate activist’s impassioned UN speech by mocking her.

On Monday night, Trump, who rearranged his schedule earlier that day and briefly attended Thunberg’s speech, shared video of Thunberg’s speech on Twitter, and above it wrote, sarcastically, that “[s]he seems like a very happy young girl looking forward to a bright and wonderful future. So nice to see!”

She seems like a very happy young girl looking forward to a bright and wonderful future. So nice to see! https://t.co/1tQG6QcVKO

Trump’s tweet is notable in at least three respects. First, the contrast Trump drew between “a very happy young girl” and Thunberg’s demeanor during her speech. In it, she noted world leaders have “stolen my dreams, my childhood, with your empty word” noted that “we are in the beginning of a mass extinction;” and asked, “How dare you pretend that this can be solved with just business as usual and some technical solutions?” Trump’s comment is meant to undermine the very thing that makes Thunberg an effective activist: the impassioned moral clarity with which she speaks about climate change.

As Vox’s Ella Nilsen has noted, the 16-year-old Swede “has learned that the frustration, impatience, and fear of young people for the catastrophic future is a powerful tool.” Her “superpower,” as Nilsen elaborates, “appears to be shaming adults.” And she’s used it to successfully pressure European leaders to enact policy changes — but Trump seemed to be trying to undercut that very persuasive tool, on the same day Thunberg addressed scores of world leaders at the UN.

Trump’s tweet also says something about how he thinks girls should be. They should not be angry about the climate crisis and trying to do something about it. The UN is not the place for them. Perhaps beauty pageants are.

Finally, Trump’s tweet reflects how profoundly unserious he is about the climate crisis. And it wasn’t the only time on Monday that was on display. Asked about the Climate Action Summit during a media availability at the UN following Thunberg’s speech, Trump immediately pivoted to reciting his false talking points about how clean the water and air in America is — as if clean air and water negates concerns people like Thunberg have about the unsustainability of global temperature increases. (And that’s leaving aside the fact that his administration has weakened many of the US’s anti-pollution regulations.)

REPORTER: Mr. President, why did you go to the climate change meeting today at #unga?

As mean-spirited as Trump’s tweet seems, it wasn’t the ugliest response that the American right had to Thunberg’s speech. On Fox News, the Daily Wire pundit Michael Knowles demeaned Thunberg, who has Asperger’s syndrome, as a “mentally ill Swedish child.” Knowles’s commentary prompted Fox News to issue an unusual statement rebuking him and apologizing to Thunberg.

“The comment made by Michael Knowles who was a guest on The Story tonight was disgraceful — we apologize to Greta Thunberg and to our viewers,” a Fox News spokesperson said, according to BuzzFeed.