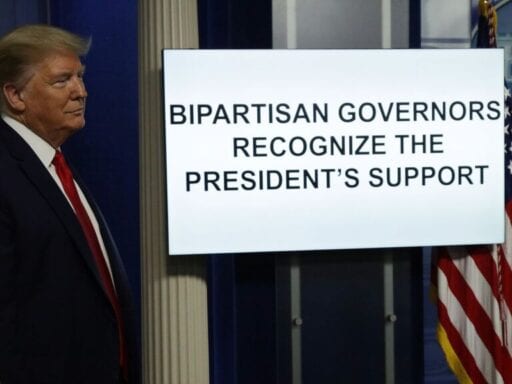 The propaganda package basically skips from January to March. That’s not an accident.

A campaign-style video President Donald Trump is promoting in an attempt to rewrite the history of his coronavirus response accidentally reveals the truth — that he didn’t really do much during a crucial period in February and early March when the virus was spreading undetected in America, besides downplaying the threat.

The video, which premiered during Monday’s unhinged White White coronavirus task force briefing and was then posted to Trump’s Twitter account, features a timeline of what the video refers to as the president’s “DECISIVE ACTION” during that period. But the list of Trump’s anti-coronavirus actions is far shorter than it might appear as it ticks by your screen.

For one thing, Trump had little to do with a number of the “actions” highlighted in the timeline. For another, the video includes a number of developments that are really nothing to brag about, such as the first US case being reported on January 20 and the CDC testing debacle that put the US behind the curve compared to other countries that have more successfully handled the coronavirus. And it skips right from early February to March, thereby revealing Trump didn’t do much during a period in which proactive measures could’ve been taken, saving lives and ensuring the country didn’t need to practice the sort of drastic social distancing we’re now enduring in a last-ditch effort to slow the spread.

The timeline of Trump’s “DECISIVE ACTION” in this video is so sad. The only pre-March thing he can take credit for is restricting travel from China (after virus was already spreading).

It highlights 1st reported case & CDC testing debacles as if those are things to brag about! pic.twitter.com/vbshDWJoFU

Here are some of the things mentioned in the timeline, followed briefly by the ways they actually illuminate the administration’s failings:

That’s a pretty underwhelming set of actions. And what the video doesn’t include are all the statements Trump made between January and March downplaying the coronavirus — such as his February 26 comment that “when you have 15 [coronavirus cases], and the 15 within a couple of days is going to be down to close to zero, that’s a pretty good job we’ve done.” Or his comment the next day that the virus would go away on its own “like a miracle.”

As of April 14, the US now has more than 587,000 confirmed cases and over 23,500 Covid-19 related deaths. Now, instead of saying coronavirus will magically go away, Trump has tried to redefine success as keeping the death toll under 100,000.

Later Monday, the Trump campaign followed up on the campaign-style video (one that was apparently produced by White House staff) by posting a list of Trump’s coronavirus accomplishments including similarly dubious things, like Trump mentioning the virus during the State of the Union and him talking about it with Indian Prime Minister Narendra Modi during a February trip.

Look at the things that made the list of Trumps COVID19 achievements just released by the Trump campaign. pic.twitter.com/h6UmmlV1IL

But instead of being focused on the coronavirus during that India trip, upon his February 26 return, Trump reportedly chastised a number of government officials over the CDC’s February 25 warning that the virus might cause “severe” disruption to American life — not because he thought the analysis was inaccurate, but because it hurt the stock market.

Heading into a tough reelection contest against former Vice President Joe Biden, Trump is hoping to turn weakness into strength by convincing people that, unlike some in the media, he took the coronavirus seriously from the beginning.

The reality, of course, is that Trump was unprepared. He disbanded the White House’s pandemic preparedness team in 2018, ignored warnings from his top advisers in January and February that the coronavirus could be devastating to the US economy and kill a million or more people, and engaged in wishful thinking until the last possible moment that the coronavirus would miraculously disappear without doing damage to the US economy.

Trump’s meltdown on Monday — and seemingly, his “accomplishments” video — was a reaction to an in-depth story the New York Times published over the weekend that examines his coronavirus failures in-depth. The piece is packed with documents, email threads, and on-and-off-the-record quotes from government officials — but instead of responding to it on the merits, Trump spent the weekend accusing the Times of fabricating sources.

When the Failing @nytimes or Amazon @washingtonpost writes a story saying “unnamed sources said”, or any such phrase where a person’s name is not used, don’t believe them. Most of these unnamed sources don’t exist. They are made up to defame & disparage. They have no “source”…

At this late date, it’s no longer a surprise that Trump is fundamentally incapable of being accountable for anything. (Monday’s briefing came on the one-month anniversary of his proclamation on the state of the US coronavirus crisis: “I don’t take responsibility for anything at all.”) But the new coronavirus timeline video illustrates both the brazenness of Trump’s attempt to rewrite history and the sheer laziness of it. It tries to create the optics of action, but a close look at the things being highlighted as accomplishments reveals there’s really nothing there beyond bluster.