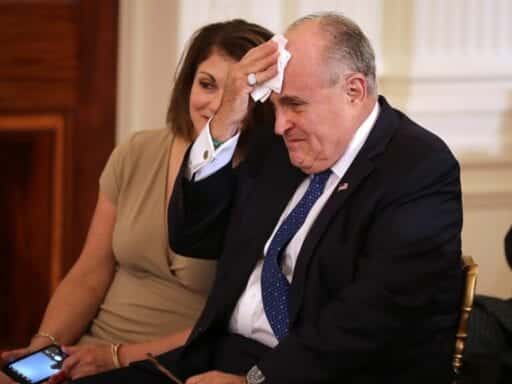 Chuck Todd’s response: “This is going to become a bad meme.”

Rudy Giuliani offered up a new explanation for why President Donald Trump’s legal team is hesitant for him to talk with special counsel Robert Mueller in the Russia investigation: Trump could perjure himself because “truth isn’t truth.”

The assertion is perhaps one of the more comical attempts the Trump team has made to attack and undercut the Russia probe and explain their bending relationship with the truth, alongside “alternative facts” from Kellyanne Conway and “what you’re seeing and what you’re reading is not what’s happening” from the president himself.

The former New York City mayor claimed that truth isn’t truth in an appearance on NBC’s Meet the Press with Chuck Todd on Sunday. Todd played for Giuliani a string of clips of him discussing whether or not Trump would sit for an interview with Mueller, showing how his story has changed over time.

“I am not going to be rushed into having [Trump] testify so that he gets trapped into perjury,” Giuliani said when asked by Todd about why Trump’s legal team’s negotiations with Mueller have dragged on. “And when you tell me that, you know, he should testify because he’s going to tell the truth and he shouldn’t worry, well that’s so silly because it’s somebody’s version of the truth. Not the truth.”

After a short back-and-forth, Todd, laughing, appeared to realize that Giuliani’s assertion was going to get some traction online. “This is going to become a bad meme,” he said.

He was not wrong.

In the interview, Giuliani said Trump has no intention of firing Mueller, despite the president’s continued attacks on the Russia investigation.

This isn’t the first time Trump’s legal team has played postmodernist and hinted that it might be too hard to discern the truth because it’s all relative anyway.

As Politico notes, Giuliani last week rejected journalist Chris Cuomo’s assertion that “facts are not in the eye of the beholder.”

“Yes they are. Nowadays they are,” Giuliani replied.

And in May, Giuliani told the Washington Post that “truth is relative” and that’s why he was worried an interview with Mueller’s team would be a perjury trap. “They may have a different version of the truth than we do,” he said.

That Trump and the people around him aren’t exactly married to truth and fact is no secret. The president’s lawyers have reportedly worried about Trump speaking with Mueller precisely because they think he might get caught in a lie.

The point Giuliani was trying to get at in his Sunday interview with Todd was that the president’s “version” of the truth might differ from, example, former FBI James Comey’s account of the firing of former national security adviser Michael Flynn and Trump encouragement that Comey let Flynn go. He said there’s a “credibility gap” between Trump and Comey and said that he believes Mueller will believe Comey over Trump because they are friends.

“Is it possible he makes a conclusion based on who’s been more truthful over the years?” Todd asked.

Giuliani paused and then said Mueller’s conclusion could be based on whose statement is “more logical.” But, he said, you can’t “bring into question prior conduct.”

Romance novelists speak out on the harassment they face online
Stranger Things season 3 is charming but frustrating. Here’s a spoiler-free review.
Mark and Patricia McCloskey, the gun-toting St. Louis couple, explained
Sudan signs power-sharing deal as its former dictator goes to trial
Lovecraftian horror — and the racism at its core — explained
How to answer 7 big questions kids have about the coronavirus pandemic