Tuesday’s impeachment hearings were a disaster for Republicans 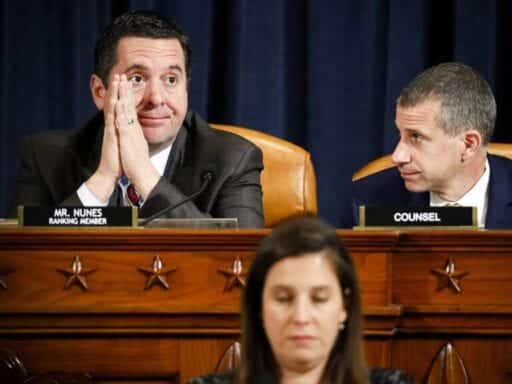 Even their own witnesses said damaging stuff.

In theory, the makeup of Tuesday’s House Intelligence impeachment hearings could have led to a balanced day, with some good news for Democrats and some for Republicans.

But Tuesday’s testimony was, from practically top to bottom, a disaster for the president and his Republican allies.

All four of the witnesses confirmed key parts of the overall case against the president — that he twisted US foreign policy into a tool of his reelection campaign by using military aid in an effort force Ukraine into opening an investigation into the Biden family. In one particularly striking example, Volker — one of the GOP witnesses — amended his earlier closed-door deposition to clarify that the administration’s behavior was shadier than he had previously thought.

Meanwhile, the Republicans on the intelligence committee, from ranking member Devin Nunes on down, did not present a consistent and compelling counternarrative. They did little to contest the facts, preferring instead to attack the media, the whistleblower whose complaint kicked off this saga, or the witnesses themselves.

The day underscored the fundamental fact of the situation: Trump did what Democrats are accusing him of doing. The only issue is whether congressional Republicans are willing to punish him for it.

Vindman and Williams were both important witnesses because they listened in on Trump’s now-infamous July 25 call with Zelensky, and both found it concerning. That’s the one where Trump pivots from a discussion of US military aid to Ukraine to asking Zelensky to “do me a favor though:” investigating Burisma, the Ukrainian company that had Hunter Biden on the board, and a conspiracy theory about Ukraine’s role in the 2016 election.

Vindman testified that he raised concerns about the call inside the US government, saying that he interpreted it as an “improper … demand” that “a foreign government investigate a U.S. citizen and political opponent.” Williams said it was “unusual,” unlike any other similar call she had been on because it “involved discussion of what appeared to be a domestic political matter.”

They were two people who heard what Trump said in real time testifying, under oath, that they thought there was something off about it. One is a decorated career military officer, the other a National Security Council staffer who worked for Vice President Mike Pence. It’s exceptionally implausible that Williams and Vindman are out to get Trump, and much easier to believe that they’re government employees who were genuinely worried about the president’s behavior.

Vindman underscored this point in his opening testimony, which included a moving reflection on his immigrant background. He moved here from the Soviet Union at four years old, described himself as committed to serving the country that saved his family from totalitarianism, and at one point directly reassured his father, who brought him to the US, that challenging the country’s leadership was safe.

“Dad, I’m sitting here today in the US Capitol. Talking to our elected officials is proof that you made the right decision 40 years ago to leave the Soviet Union and come here to the United States of America in search of a better life for our family,” Vindman said. “Do not worry. I will be fine for telling the truth.”

Vindman — also an Iraq War veteran with a Purple Heart — is very hard to dismiss as a left-wing Democratic plant.

Morrison and Volker, the witnesses who were supposed to be good for Republicans, also ended up confirming key parts of the case against Trump.

Daniel Goldman, the Democratic counsel who handled much of the questioning, asked Morrison about a conversation he had with Trump’s ambassador to the EU, Gordon Sondland. Morrison testified that Sondland described another conversation, with Ukrainian official Andriy Yermak, in which he made it very clear that there was a quid pro quo on the table.

“[Sondland told Yermak] that the Ukrainians would have to have the prosecutor general make a statement with respect to the investigations as a condition of having the aid lifted,” he said.

Volker recalled another moment involving Sondland — a July 10 meeting between US and Ukrainian officials. Previously, Volker had said the meeting was uneventful. But on Tuesday, he amended his testimony to say that Sondland had inappropriately raised the question of “investigations” during the conversation.

“Ambassador Sondland made a generic comment about investigations,” Volker said. “I think all of us thought it was inappropriate.”

This is consistent with testimony from Vindman, who had been at the same meeting and recalled the same sequence of events (he also said then-National Security Adviser John Bolton shut down the meeting to cut off Sondland’s inappropriate comments). There were a lot of similarly consistent accounts across the entire day of testimony — and, on the whole, they make the president look really bad.

It’s hard to know what, exactly, the overall Republican defense against these allegations was supposed to be.

There were a few effective moments — Rep. Elise Stefanik (R-NY), for example, got the witnesses to say that the Ukrainians did not seem aware at first that aid was being withheld, suggesting this means there could not have been a quid pro quo exchange between aid and investigations:

Elise Stefanik defends Trump by highlighting how, according to Volker, Ukrainian officials weren’t explicitly informed that military aid was being held up as leverage to get them to conduct investigations of political benefit to Trump pic.twitter.com/R0axr5zGf3

This line of question is deeply misleading: Once the Ukrainians were made aware of the aid being withheld, it quickly became clear to them that it was being blocked as part of a quid pro quo for a Biden investigation. What’s more, aid wasn’t the only thing: There was also a clear offer of a White House visit, which Zelensky very much wanted, in exchange for investigations.

As a matter of political theater, Stefanik got Republicans some useful soundbites. But that’s pretty much the best of what you could say for the GOP’s efforts. On the whole, it was a pretty bad day for Trump’s allies, who were fighting an uphill battle against the facts as laid out by the witnesses, including witnesses they called themselves.

In some cases, the GOP witnesses directly undercut Trump, as my colleague Andrew Prokop explains:

Volker said that “the accusation that Vice President [Joe] Biden acted inappropriately” with regard to Ukraine “did not seem at all credible to me” — contradicting Trump’s unsupported insistence that Biden acted corruptly in helping push out Viktor Shokin, a Ukrainian prosecutor whom the administration and American allies considered corrupt.

Volker also said that, previously, he drew a distinction between investigating Burisma (the Ukrainian gas company Hunter Biden sat on the board of) and the Bidens. He understood Trump officials were pushing for investigations into Burisma, which he considered appropriate. But “in retrospect, I should have seen that connection differently” — admitting it was inappropriate and “unacceptable,” and targeted at the Bidens.

And Volker said that former Ukrainian prosecutor general Yuri Lutsenko, who has made allegations about the Bidens’ corruption that Rudy Giuliani promoted, isn’t credible. Indeed, Volker even said that he told Giuliani this in private — and that Giuliani agreed. All this debunks a counter-narrative pushed by Trump’s allies, in which the President was legitimately concerned about corruption in Ukraine.

As the day went on, despite a lot of heated rhetoric from Republican members of the committee, especially from Nunes, there were few coherent substantive challenges to what the witnesses were saying.

Instead, the GOP tried to go after the witnesses themselves — including a notably ugly example when Steve Castor, the Republican attorney in charge of questioning, scrutinized Vindman’s patriotism.

He specifically focused on a job offer Vindman received from Oleksandr Danylyuk, the former head of Ukraine’s National Security and Defense Council. Apparently, Danylyuk offered Vindman an opportunity to become Ukraine’s defense minister three times during the trip — and, each time, Vindman declined.

“Upon returning, I notified chain of command and the appropriate counterintelligence folks about this, the offer,” Vindman said.

But Castor wasn’t satisfied. He continued to press Vindman on whether he ever considered the offer, resulting in an exchange in which he appeared to call Vindman’s patriotism into question:

CASTOR: Ukraine’s a country that’s experienced a war with Russia. Certainly their minister of defense is a pretty key position for the Ukrainians. President Zelensky, Mr. Danylyuk, to bestow that honor — at least asking you — that was a big honor, correct?

VINDMAN: I think it would be a great honor, and frankly I’m aware of service members that have left service to help nurture developing democracies in that part of the world. It was an Air Force officer that became minister of defense, but I’m an American. I came here when I was a toddler. And I immediately dismissed these offers. Did not entertain them.

CASTOR: When he made this offer to you initially, did you leave the door open? Was there a reason he had to come back and ask a second or third time?

VINDMAN: Counselor, you know what, the whole notion is rather comical that I was being asked to consider whether I’d want to be the minister of defense. I did not leave the door open at all.

VINDMAN: But it is pretty funny for a lieutenant colonel of the United States Army, which really isn’t that senior, to be offered that illustrious a position.

CASTOR: When he made this offer to you, was he speaking in English or Ukrainian?

VINDMAN: He is an absolutely flawless English speaker.

Castor is arguing that Vindman’s loyalties were strained by repeated job offers from the Ukrainians, highlighting Vindman’s Ukrainian language skills, reminding everyone that he’s foreign-born. The insinuation, that Vindman’s background makes him an unreliable witness to Trump’s malfeasance, is reasonably clear.

Castor never outright brought up Vindman’s Ukrainian origin (or his Jewish background), but he didn’t really need to. The line of questioning served only to suggest that a Ukrainian-born immigrant cannot be trusted to be loyal to the United States even if he was wounded fighting for his country.

The ugly xenophobia of this exchange makes it especially notable. But the thin reasoning behind it — Vindman got a job offer from the Ukrainians that he turned down, so maybe we can’t believe his testimony? — was pretty par for the course.

If these are the best defenses Trump’s allies can muster, then they really won’t have much cover against charges of naked partisanship in a vote against impeachment.

“Probably the worst briefing I’ve seen”: Inside the disastrous congressional Iran meeting
The Senate just voted to let the government keep surveilling your online life without a warrant
I offered free rent because of the pandemic. Other landlords should do what they can, too.
Here’s the complete list of 2019 Grammy winners
AI has cracked one of biology’s toughest problems
Democrats are already at odds over how to win in 2022