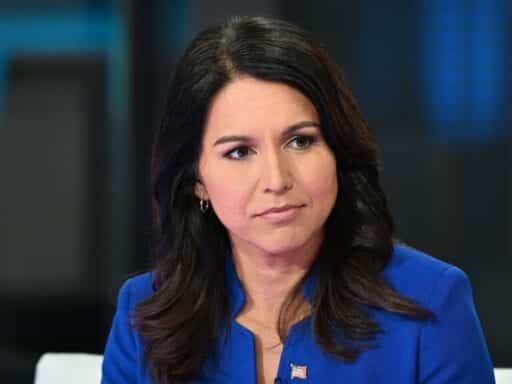 Rep. Tulsi Gabbard on the set of “Fox and Friends” in September 2019. | Slaven Vlasic/Getty Images

Why are Hillary Clinton and Tulsi Gabbard fighting? Tension between Gabbard and Democratic leaders goes way back.

Democratic presidential candidate Rep. Tulsi Gabbard called former Democratic presidential nominee Hillary Clinton “the queen of warmongers” Friday in response to comments Clinton made about Gabbard on a podcast earlier in the week. The attacks marked the latest clash between the representative from Hawaii and top Democrats over her controversial foreign policy views, which at times have aligned more with conservatives than members of her own party.

The spat began when Clinton, speaking on the podcast Campaign HQ (hosted by former Obama aide David Plouffe) said Gabbard is “the favorite of the Russians. They have a bunch of sites and bots and other ways of supporting her so far.”

“I think they’ve got their eye on somebody who is currently in the Democratic primary and are grooming her to be the third-party candidate,” Clinton said. A spokesman for Clinton later told the New York Times the “they” she was referring to were Republicans, not Russians.

No evidence was offered to support this assertion, nor have frequent allegations that Russia is helping Gabbard’s campaign been proven. But in the wake of Russian manipulation of the 2016 elections, some Democrats are wary of Gabbard’s surprising popularity in right-wing circles, concerned about her frequent mentions in Russian news media, and suspicious that Russian bots may have promoted Twitter hashtags supporting her.

Clinton seems to be one of these Democrats, and Gabbard responded Friday by saying Clinton’s attacks make it clear she’s been behind “a concerted campaign to destroy my reputation.”

“You, the queen of warmongers, embodiment of corruption, and personification of the rot that has sickened the Democratic Party for so long, have finally come out from behind the curtain,” Gabbard wrote. “It’s now clear that this primary is between you and me. Don’t cowardly hide behind your proxies. Join the race directly.”

Great! Thank you @HillaryClinton. You, the queen of warmongers, embodiment of corruption, and personification of the rot that has sickened the Democratic Party for so long, have finally come out from behind the curtain. From the day I announced my candidacy, there has been a …

… concerted campaign to destroy my reputation. We wondered who was behind it and why. Now we know — it was always you, through your proxies and …

… powerful allies in the corporate media and war machine, afraid of the threat I pose.

It’s now clear that this primary is between you and me. Don’t cowardly hide behind your proxies. Join the race directly.

Gabbard made the cutoff for the fourth debate stage last Tuesday, but has consistently been one of the lowest-polling Democrats in the presidential primary race. She has butted heads with Democratic leadership, even threatening to boycott the last debate. In an interview with NBC, however, she pushed back against Clinton’s claim she could run as a third-party candidate, saying she’s a steadfast Democrat hoping to change her party’s hawkish ways.

“If you look unfortunately at the Democratic Party today, it is a party that has become a warmongering party,” she said. “A party that defends these corporate special interests and the establishment rather than being the party that is truly of, by and for the people.”

Gabbard’s comments hint at a longstanding source of tension between the candidate and her party — her ardent antiwar stances and her controversial takes on Islam and Middle Eastern policy. He foreign policy stances have put her at odds with her party before, and these positions have now put her in direct opposition with her party’s former nominee.

Gabbard has a long-standing conflict with mainstream Democrats

Gabbard rose through the ranks of the Democratic Party in the early 2000s, following her election to the Hawaii Legislature at 21-years-old. She served in the Hawaii Army National Guard as a combat medic in Iraq and counterterrorism trainer in Kuwait. And she became a vocal critic of former President George W. Bush’s wars in the Middle East, leaning on her personal experience with wartime anguish to lend credence to her policy points.

She became a party darling, endorsed by former President Barack Obama and a vice chair on the Democratic National Committee (DNC).

But that popularity quickly soured: Gabbard later criticized Obama for not using the phrase “radical Islam” to describe jihadist violence in the Middle East, and praised autocratic rulers Syrian President Bashar al-Assad and Egyptian President Abdel Fattah el-Sisi for fighting terrorism in the region. Party leaders began to see her as disloyal, according to reporting by Vox’s Zack Beauchamp.

“I felt disheartened that the promises our leaders made after 9/11 to take out the Islamic extremist terrorists seemed to have been forgotten,” Gabbard wrote in a 2014 op-ed for TIME Magazine. “Instead we were set out to fight wars of choice, consisting of missions of nation-building, occupation, and overthrowing dictators.”

She cemented her outsider status when she dropped her DNC post to endorse Sen. Bernie Sanders of Vermont over Hillary Clinton in the 2016 Democratic presidential primary on the basis of foreign policy concerns.

In the October Democratic presidential debate, Gabbard worked to make the case that she is now the candidate who can lead the US to “peace and prosperity,” calling US involvement in conflicts in Syria and Yemen “regime change wars,” and promising “as president I will end these regime change wars.”

Gabbard is not expected to follow Clinton as the next Democratic nominee for president; however, she had enough support to meet the DNC’s requirements to participate in the October debate. Though she has yet to meet the polling requirements for the fifth debate, she has met the donor requirement. She also has a strong and vocal base of support on social media.

However, some believe that support is not real, and have argued, as Clinton did, that Gabbard is being used to sow discord in the party ranks as they prepare for a 2020 battle with President Donald Trump. Russia used social media and other tools to exploit American cultural fragmentation in a coordinated campaign in support of Trump in 2016, and many are on high alert for another attempt. There is some worry Gabbard is part of this next attempt.

Those concerns were inflamed after the second Democratic presidential debate in July, when Gabbard emerged as the most-Googled candidate from the debate and the hashtag #KamalaHarrisDestroyed (which argued Gabbard bested Sen. Kamala Harris in an exchange) took off on Twitter. Wall Street Journal reporters Maureen Linke and Eliza Collins found hundreds of social media accounts suspected to be bots promoted divisive information online during the debate and may have helped to spread hashtags believed to have been started by conservative activists.

But Twitter told Vox’s Emily Stewart that it didn’t find evidence of significant bot activity around the debate in an initial investigation, and there’s no evidence to support the claim that the uptick in Google searches indicate foreign manipulation.

“I do not want someone of her stature to legitimate these attacks against anybody,” Jones said. “If you’ve got real evidence, come forward with it. But if you’re just going to smear people casually on podcasts, you are playing right into the Russians’ hands.”

Democratic presidential candidate Marianne Williamson tweeted, “The Democratic establishment has got to stop smearing women it finds inconvenient! The character assassination of women who don’t toe the party line will backfire.”

Fellow candidate Sen. Cory Booker took a different tack, responding to Gabbard’s defense of herself with a gif:

While allegations that Russia is helping Gabbard remain unproven, experts like the acting director of national intelligence say it is likely that Russia will try to manipulate US elections again in 2020. And as Stewart notes, the very fact that a Russia misinformation campaign is in the public discourse hampers the democratic process by damaging public trust:

But it’s not just the misinformation itself that sows division, it’s also the debate about it. People are confused about what social media manipulation is, how it works, and whether it’s happening. And they’ve also got their own political motivations to believe whether or not it exists.

That means regardless of whether any candidate’s campaign is getting a boost, the 2020 election is already being affected by foreign powers.