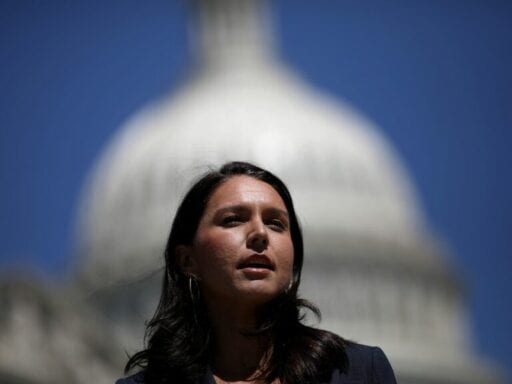 The controversial Democratic senator from Hawaii is running for president in 2020.

Tulsi Gabbard, a Democratic representative from Hawaii, was first elected to Congress in 2012. She announced her presidential run on January 11, 2019, joining a growing field of Democratic contenders seeking the Democratic Party nomination in the 2020 presidential election.

Gabbard initially excited the left because she was an outspoken economic progressive and a veteran who objected to American intervention abroad. She was also the first Hindu member of Congress. Nancy Pelosi called her an “emerging star”; MSNBC’s Rachel Maddow predicted that “she is on the fast track to being very famous.”

But in the following years, Gabbard staked out foreign policy positions that diverged sharply from those of her allies. She joined Republicans in demanding that President Obama use the term “radical Islam.” She was the member of Congress most willing to advocate for Syrian dictator Bashar al-Assad. She dubbed herself a “hawk” on terrorism. Reporters documented worrying ties to anti-LGBTQ groups — including one run by her father — and anti-Muslim Hindu nationalists.

Despite the controversy, Gabbard appears poised to appeal to Democrats wary of the established party structure. In an interview with CNN, she mentioned climate change and criminal justice reform as key issues, and reiterated her distinctive foreign policy views, calling “war and peace” her “central” campaign issue.