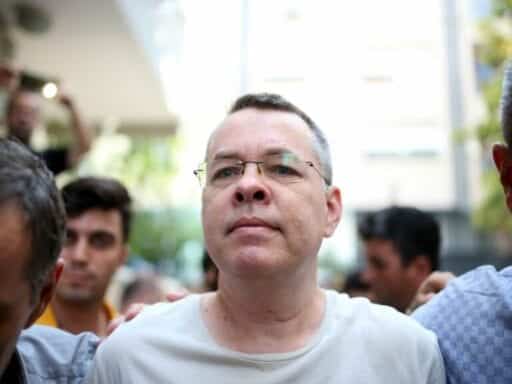 President Trump’s focus on bringing hostages home is one of the more successful parts of his foreign policy.

After years of imprisonment that sparked an international furor, Turkey has released North Carolina Pastor Andrew Brunson into the custody of US diplomatic personnel. He’ll soon fly to a US air base in Germany before heading back to the United States.

Brunson was held by Turkish authorities for two years, charged with unproven crimes that he was involved in espionage. But after months of trying, the Trump administration struck a deal with Turkish officials to bring the pastor home.

Upon hearing the news on Friday, Trump tweeted “My thoughts and prayers are with Pastor Brunson, and we hope to have him safely back home soon!”

Thus ends a saga that became deeply personal for the Brunson family and top US administration officials. Brunson is “a great Christian, family man and wonderful human being,” President Donald Trump tweeted on July 28. “He is suffering greatly.”

Trump escalated tensions with Turkey, a NATO ally, over Brunson. He placed sanctions on two high-ranking Turkish officials and tariffs on Ankara’s steel and aluminum sectors because the country wouldn’t release the pastor.

Those moves quickly plunged Turkey’s currency and may send the country into a recession next year. It’s possible the US will lift some or all of those penalties in exchange for Brunson’s return.

Why Turkey kept Brunson for so long

Brunson lived in Turkey for more than 20 years. Turkish authorities detained him on October 7, 2016, claiming that he was a spy and had connections to a terrorist group. The US expected him to be released on July 18, but then Turkish officials decided to put him under house arrest.

The charges he faced meant he could have spent the rest of his life in prison. But during a hearing on October 12 in Turkey, Brunson’s fourth overall, three witnesses took back their negative statements about the pastor. That cleared the way for his release.

Turkey likely never had the intention of keeping Brunson in its custody forever. “The case against Brunson, like tens of thousands of other political prosecutions in Turkey, was farcical from the beginning, comprised of guilt-by-association, fabricated evidence, and secret witness testimony,” Howard Eissenstat, a Turkey expert at St. Lawrence University, told me. “His release is as much a political decision as his initial prosecution was.”

Experts told me Ankara saw him as potentially useful leverage in so-called “hostage diplomacy” — specifically, in the Turkish government’s quest to get the US to extradite a Turkish cleric named Fethullah Gülen.

Turkish President Recep Tayyip Erdoğan, without evidence, blames Gülen for instigating a July 2016 coup attempt and has called for his immediate return to Turkey to stand trial. The problem for Erdoğan is that Gülen currently lives in Pennsylvania after coming to the US in 1999 to escape persecution from a previous Turkish administration.

The Trump administration seems to have made freeing US hostages held abroad a priority, and has unquestionably had more success than the Obama administration.

The White House worked with Egypt to release Aya Hijazi, an Egyptian-American aid worker, from captivity in April 2017. Six months later, Trump announced the release of Caitlan Coleman, her husband, and their three children from captivity in Afghanistan, where they’d been held by the Taliban-affiliated terrorist organization known as the Haqqani network for five years. And in May, Trump secured the release of three American hostages — Tony Kim, Kim Hak-song, and Kim Dong-chul — from North Korea.

In 2015 — six years into his presidency — then-President Barack Obama admitted his administration had at times failed families of hostages. “It is true that there have been times where our government, regardless of good intentions, has let them down,” Obama said. “I promised them that we can do better.”

Trump, it seems, is following through on that promise — to the joy of the hostages and their families.

Another woman has allegations of misconduct by Kavanaugh. Here’s why that matters so much.
A judge has rejected the Ohio governor’s request to postpone the state’s primary
The biggest radioactive spill in US history never ended
Trump is single-handedly trying to blow up international trade
Some brands are closing stores for the global climate strike. That’s a big deal.
House GOP in disarray ahead of key immigration votes