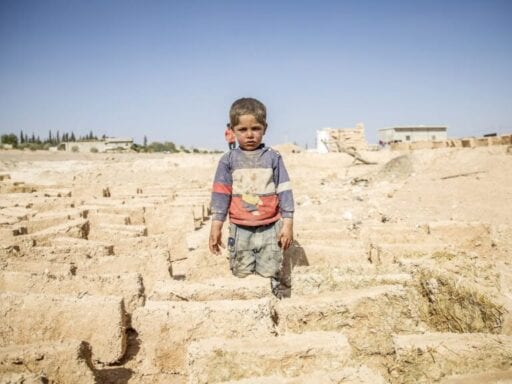 Share
Loading...
Internally displaced Syrians, fled from clashes as well as Daesh terrorists’ and Assad Regime’s attacks, stay at the makeshift camps near the border of Turkey between Al-Rai (Cobanbey) and Jarabulus Towns of Aleppo, Syria, on October 10, 2016, as the civil war continues.  | Emin Sansar/Anadolu Agency/Getty Images

Trump isn’t likely to rush to their aid.

Turkey’s escalating offensive in Syria could displace as many as 300,000 people and cut off their access to humanitarian services — creating yet another refugee crisis in the war-torn country just as the US is slashing the number of refugees it will admit.

Since the beginning of the ongoing civil war in March 2011, about 6.6 million refugees have fled the country and another 6.1 million remain in Syria but have been internally displaced.

Those still in the country may be forced to relocate yet again as a result of Turkey’s invasion of northeastern Syria. The US had stationed troops in the region for years, but President Trump abruptly relocated them Sunday, leaving the Syrian Kurdish fighters known as the Syrian Democratic Forces (SDF) vulnerable to Turkey’s attack.

Thousands of refugees are fleeing the region. But the US is unprepared to aid and resettle Syrian refugees should the current offensive create another crisis.

Chiara Trincia, a spokesperson for the International Rescue Committee, said that the US needs to resume diplomatic engagement to reach sustainable peace in Syria and boost humanitarian assistance if it is to avert another refugee crisis.

“To date, humanitarian concerns have not been a top priority amongst decision-makers including the US, with devastating consequences for half the Syrian population,” she said.

Turkish president Recep Tayyip Erdoğan has said that he wants to create a “safe zone” for refugees spanning about 20 miles into northeastern Syria.

But the International Rescue Committee, one of the NGOs providing services to refugees on the ground in Syria, said in a statement that even a “limited military initiative” by Turkey could leave as many as 60,000 displaced.

Civilians are fleeing with “only the clothes on their backs” and many are expected to head toward Raqqa, a city that lies in ruin following thousands of US-backed airstrikes that ultimately toppled ISIS forces based there in 2017, the organization said. The camps in the surrounding area, which are already at capacity, do have the resources to accommodate more refugees.

The UN Refugee Agency said that further conflict in the region will prevent humanitarian workers from delivering desperately needed aid to civilians. An international commission investigating human rights violations in Syria also warned that the offensive could lead to a resurgence of ISIS, which it said is the “last thing Syrians need now.”

“Many of these people have already been displaced multiple times and suffered horribly under the brutal rule of ISIS, only to be facing yet another crisis,” Misty Buswell, Middle East Policy Director at the International Rescue Committee, said.

The potential refugee crisis goes beyond Syria’s borders. Erdoğan warned on Thursday that he could make the situation even worse by allowing refugees already in Turkey to cross the border into the European Union.

Turkey has absorbed more Syrian refugees than any other country: 3.6 million, the overwhelming majority of which live outside of camps and have difficulty accessing basic services, such as medical care and food assistance. The EU has provided Turkey with financial aid to facilitate refugee resettlement and prevent migrants from flooding the continent, but Erdoğan is facing pressure to resettle most of them in light of a recent economic downturn in the country.

Erdoğan threatened to stop cooperating if European countries denounce his offensive in Syria.

“Hey European Union, if you attempt to label our operations as an ‘invasion,’ then it’s simple,” he said Thursday. ‘We will open our borders and send 3.6 million refugees your way.”

Keeping out Syrian refugees was one of Trump’s campaign promises

The US is unlikely to be a champion of Syrian refugees in the face of another impending crisis.

The US started welcoming Syrian refugees at high rates in 2015. But the public opinion started to turn after the Paris terror attacks later that year, in which 130 civilians perished in explosions and mass shootings throughout the city, attacks reportedly sanctioned by the Islamic State.

There was speculation that one of the attackers was a Syrian refugee. It was later confirmed that all of the perpetrators were citizens of the European Union. But the rumors were enough to spark a panic about Syrian refugees and start a movement among governors, mostly Republicans, to cut back US admissions of Syrian refugees and resettlement efforts more broadly.

In September, he announced that the US would only accept 18,000 refugees total this fiscal year. Only a fraction of them, however, could be from Syria.

The US has reserved space for refugees fleeing religious persecution; Iraqis who assisted the US government or who have other American connections; and those from Guatemala, El Salvador, and Honduras. That leaves space for 7,500 other refugees, potentially from Syria.

A new executive order from Trump will allow state and local authorities to block refugees from settling in their areas. States won’t just be able to refuse refugees from certain nations, such as Syria, but they will be able to turn away all refugees if they do not have the resources to support refugees in becoming “self-sufficient and free from long-term dependence on public assistance.”

Together, Trump’s policies mean that the US can no longer be relied upon to come to the aid of vulnerable peoples like Syrian refugees.

“The US has a unique historical legacy as a generous humanitarian donor and a defender of the world’s persecuted peoples,” Trincia said. “There has unfortunately been a reversal in course with this administration.”

Why pro-Trump evangelicals brought shofars to DC this week
How to watch Trump and Biden’s dueling town halls on Thursday
What the IG report found
“High Crimes and Misdemeanors,” explained
My PTSD can be a weight. But in this pandemic, it feels like a superpower.
Trump is a real-world political science experiment