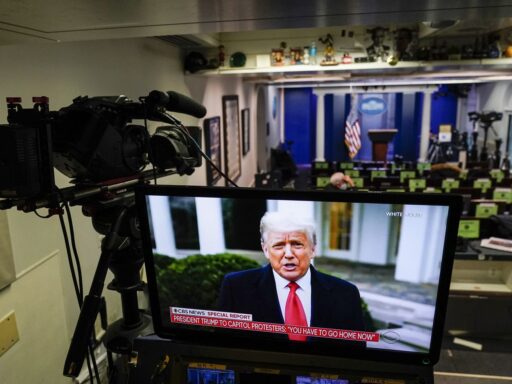 The company cited a pattern of behavior violating its policies against violent speech.

The historic decision comes in the wake of Trump’s encouragement of a protest in Washington, DC, that resulted in a mob storming the capitol building and at least five deaths. For years, the president has used his Twitter account to reach his nearly 90 million now-former followers on the platform as a means to bypass traditional media. Twitter’s decision comes after years of pressure to restrict what many of Trump’s critics view as his dangerous use of the platform to spread lies and violent rhetoric.

“In the context of horrific events this week, we made it clear on Wednesday that additional violations of the Twitter Rules would potentially result in this very course of action,” read a tweet Twitter posted on a company account explaining the decision. Twitter had previously temporarily suspended Trump’s tweets on Wednesday for violating its policies on civic integrity and violence, and warned that it may permanently suspend him if he continued to violate its policies.

After close review of recent Tweets from the @realDonaldTrump account and the context around them we have permanently suspended the account due to the risk of further incitement of violence.https://t.co/CBpE1I6j8Y

The move also comes as hundreds of Twitter’s own employees urged CEO Jack Dorsey to suspend Trump permanently, according to a report by the Washington Post.

Facebook, where Trump also has tens of millions of followers, has suspended Trump’s account for at least two weeks until until President-elect Joe Biden’s inauguration.

This is a developing story.

The WHO is concerned Tanzania may be hiding Ebola cases
One of the few Black C-suite execs in tech is starting a firm to invest in Black, Latinx, and women ...
Why activists want to ban facial recognition on college campuses before it arrives
Why John Roberts won’t save the impeachment trial from partisanship
Andrew Cuomo has a plan to start reopening New York — eventually
Despite his experts’ grave warnings, Trump wants everyone to just “relax”