Twitter is finally addressing fake accounts. Trump wants it to go after two specific real ones. 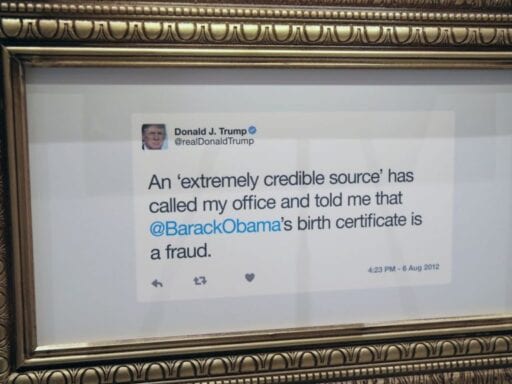 As Twitter ramps up efforts to purge suspicious and fake accounts from its platform, President Donald Trump has two suggestions for whose accounts should be deleted: the New York Times and the Washington Post, neither of whose accounts are fake or suspicious.

Here’s the kicker: In a Saturday tweet calling for those accounts to be deleted, Trump appeared to be reacting to a story from Craig Timberg and Elizabeth Dwoskin at the self-same Washington Post. That story explored Twitter’s increased focus on suspending fishy accounts from its service, as part of San Francisco-based company’s effort to police bots and trolls and prevent a repeat of Russia’s meddling in the 2016 election. Twitter has more than doubled the pace of its bot-policing efforts since October, axing 70 million accounts in May and June and keeping up that rate in July.

The president over the weekend in a tweet said that Twitter is “getting rid of accounts at a record pace,” an apparent remark on the Post story, and asked whether the “Failing New York Times” and “propaganda machine for Amazon” Washington Post would have their accounts deleted.

According to the Post’s report on Twitter’s bot efforts, political pressure from Congress (in reaction to Russia’s election meddling) is driving the social media giant’s purge. News reports about Twitter’s bot problem and a “rethinking of Twitter’s role in promoting online conversation” also contributed to its more aggressive stance. Twitter is cutting so many accounts it might actually result in a decline in monthly users in its second-quarter earnings report.

Trump hasn’t been pressuring Twitter to purge its user base — at least not the actually problematic bot accounts.

The president is mad about press coverage of him. He’s fine with the bots.

Saturday’s tweet is yet another example of Trump’s sustained attack on the media and anger at coverage of him that is negative or he doesn’t like. He has gone after both the Times and the Post, which is owned by Amazon CEO Jeff Bezos, multiple times.

Of course, Twitter accounts of reputable news organizations aren’t among the estimated 1 million per day the platform is purging. They’re getting rid of the types of fake and bot accounts that Clay Aiken bought to boost his Volvo complaint and Louise Linton used to increase her internet following. More notably, they’re clamping down on fake accounts that Russians used to spread disinformation during the 2016 presidential campaign and after and the ones that are made to fuel political debate and spread false information. Twitter at the start of the year alerted about 1.4 million US users that they might have interacted with a Russia-linked account during the 2016 election.

Trump has often been ambivalent when it comes to Russian meddling in the 2016 election, and it’s not clear whether he takes the matter very seriously. Trump in February claimed he never said Russian election interference didn’t happen, but he has done so publicly multiple times. He has persistently decried special counsel Robert Mueller’s investigation into Russian meddling and possible collusion between the Trump campaign and Russia as a “witch hunt.”

The president has often praised Russian President Vladimir Putin and seemed to accept his denials of his involvement in the election influence campaign, despite conclusions from US intelligence agencies and the US Senate that Putin ordered the efforts.

Just this week at a rally in Montana, Trump, who is expected to meet with Putin a summit in Helsinki later this month, didn’t have a bad word to say about him. “You know what? Putin’s fine. He’s fine. We’re all fine,” he said.

In August, Trump tweeted a thanks to one of his social media supporters, known as @ProTrump45, which wound up being a bot. Twitter subsequently suspended the account. The same month, he tweeted a “fake news” complaint from another user that, as Mashable pointed out at the time, also appeared to be a bot.

Those aren’t the only times Trump has had some eyebrow-raising Twitter interactions with suspicious accounts. In November, the president came under fire for retweeting videos from a British far-right account that produces anti-Muslim content. During the 2016 election, he retweeted a tweet from a “White Genocide” account mocking Jeb Bush.

Perhaps part of the reason Trump isn’t so bothered by the bots is that they actually help him: Twitter in January said that Russian-linked bots shared Trump’s tweets nearly half a million times in the last two and a half months of the 2016 election.

The Baby-Sitter’s Club is coming to Netflix
Trump’s disappearing populism was on full display at Thursday’s debate
Okay, Google, how do I listen to Vox?
The difference between quarantine, isolation, and social distancing, explained
YouTube, Facebook, and Apple’s ban on Alex Jones, explained
Why everyone is shunning plastic straws