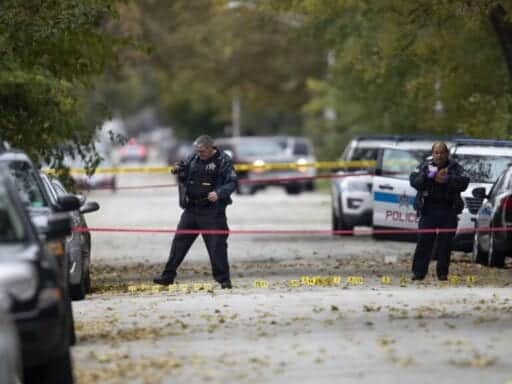 13 people were wounded, 4 critically, in the shooting on Chicago’s southside. It was December 2019’s 18th mass shooting.

Early Sunday morning, a Chicago house party held to memorialize a member of the community who had died from gun violence last spring was interrupted by two gunman, who opened fire in and around the house, wounding 13 people, 4 of whom are in critical condition.

Fred Waller, who heads the patrol division for Chicago police, said the victims ranged from age from 16 to 48 — and that a 16-year-old boy was among those in critical condition.

The Chicago Police Department said it believes the shooting was the result of a personal dispute, not an act of gang violence. But they described a scene in which the two suspects took steps to maximize casualties.

“Definitely there were two different shooters. It looked like they were just shooting randomly at people as they exited the party,” Waller said, according to the Guardian. “The people started to spill out, and as they spilled out more shots were fired. So we have about three [shooting] scenes.”

Police have taken two people into custody for questioning, and have recovered a revolver.

The party was being held to commemorate the birthday of Lonell Irvin, a 22-year-old man who was shot and killed during an attempted carjacking in April.

Like many large US cities, Chicago has struggled to deal with gun violence; according to the Chicago Tribune, 2,594 people have been shot so far this year in the city — 248 fewer than 2018.

Briefly, the two problems creating the US’ shooting epidemic

Attacks like the one Sunday morning in Chicago serve as a reminder of the US’ problem with mass shootings, which is unique to it among affluent nations. As Vox’s German Lopez has explained, that problem is the product of the US’s exceptional history of gun policy compared to its peer countries:

In the US, even a background check isn’t an absolute requirement: Current federal law is riddled with loopholes and hampered by poor enforcement, so there are many ways around even basic background checks. And if a state enacts measures that are stricter than federal laws, someone can simply cross state lines to buy guns in a jurisdiction with looser rules. There are simply very few barriers, if any, to getting a gun in the US.

Second, the US has a ton of guns. It has far more than not only other developed nations but also any other country, period. In 2017, the estimated number of civilian-owned firearms in the US was 120.5 guns per 100 residents, meaning there were more firearms than people. The world’s second-ranked country for guns was Yemen, a quasi-failed state torn apart by civil war, where there were 52.8 guns per 100 residents, according to an analysis from the Small Arms Survey.

These two factors combined make it remarkably easy for someone in the US to obtain a firearm and to kill many people with them.

Chicago seems on track to reduce its rate of shootings this year, and it’s important to figure out what is and isn’t working in producing that outcome.

But every mass shooting is also an opportunity to reflect on a bigger, systemic issue in the US: We have too many guns, and people can get their hands on them too easily.

Hannah Gadsby on comedy, free speech, and living with autism
Why a manual by a control freak is the best thing to read when the world is out of control
Lawrence Wright’s new pandemic thriller is infuriating to read
Bernie Sanders’s housing-for-all plan, explained
Elizabeth Warren isn’t done yet
The Army was finally considering renaming bases that honor Confederates. Trump quashed it.