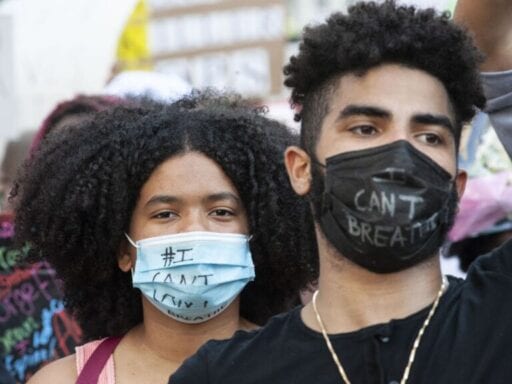 The protests against police brutality over the weekend are not only a story about state-sanctioned violence against black Americans. They are also a health care story that reveals the nation’s structural racism, in two important ways.

First, police violence is a public health risk. In almost any way you measure it, the US criminal justice system is prejudiced against black Americans, and black people are much more likely to be subjected to state violence in the US compared to white Americans.

Researchers from Rutgers University, the University of Michigan, and Washington University in St. Louis tried to quantify the risk to black lives from law enforcement in a recent study. Their findings were stunning: Black men, by far the most at-risk group, face 1 in 1,000 odds of being killed by the police over the course of their lives.

This chart succinctly summarizes the researchers’ findings of the risk across different races and genders:

Racial discrimination in America’s criminal justice system manifests in every step from arrest to trial to conviction and incarceration. Radley Balko covered the relevant research in a column for the Washington Post. Sadly, none of it will come as much of a surprise: Black people are more likely to be stopped by police, they are less likely to get a fair trial, and their sentences are longer than those of white people convicted of the same crimes.

And those systemic injustices have their own health consequences, beyond the most extreme form of a law enforcement officer taking the life of a citizen. A pair of Harvard professors ran through some of them in this piece published in The Conversation:

These disparities, the result of the structural racism that puts black people disproportionately at risk of police violence and incarceration, is what people have come out to protest.

And they are doing so in the middle of a coronavirus pandemic that has also taken a disproportionate toll on black Americans.

Black people are more likely to work in jobs considered “essential,” exposing them more to the virus. America’s failure to build an equitable health system means its black residents have high rates of preexisting conditions that make them more vulnerable to Covid-19. They also live in places more exposed to air pollution and have less reliable access to clean water. America’s structural racism infects every part of the lives of its marginalized citizens.

And those disparities have manifested in the coronavirus pandemic, as this data from New York City, the outbreak’s American epicenter, demonstrates:

And after three months of unprecedented nationwide lockdowns, the sight of thousands of people gathered close together to march in the streets has been a little surreal. It has also raised fears that these protests could become superspreading events that only exacerbate the disparities described above.

It’s too soon to say what exactly the effect, if any, will be. But Roni Caryn Rabin covered some of the reasons for concern in the New York Times:

Dr. Howard Markel, a medical historian who studies pandemics, likened the protest crowds to the bond parades held in American cities like Philadelphia and Detroit in the midst of the 1918 influenza pandemic, which were often followed by spikes in influenza cases.

“Yes, the protests are outside, but they are all really close to each other, and in those cases, being outside doesn’t protect you nearly as much,” Dr. Markel said. “Public gatherings are public gatherings — it doesn’t matter what you’re protesting or cheering. That’s one reason we’re not having large baseball games and may not have college football this fall.”

Though many protesters were wearing masks, others were not. SARS-CoV-2, the virus that causes the Covid-19 disease, is mainly transmitted through respiratory droplets spread when people talk, cough or sneeze; screaming and shouting slogans during a protest can accelerate the spread, Dr. Markel said.

With that in mind, and no sign of the protests ending anytime soon, I would urge anybody considering joining the protests to read this piece from Vox’s Eliza Barclay. She covers some of the precautions people can take to protest more safely.

Be safe, everyone, and be good to each other.

The science is in: exercise won’t help you lose much weight
FEMA’s testing a new “presidential alerts” system that sends messages to your phone
Why America doesn’t win wars anymore
Many Jewish voters are lukewarm on Bernie Sanders — for now
SNL tackles the political divide and the electoral college with a Christmas dinner spoof
Clean energy is catching up to natural gas much faster than anyone thought