Two weeks after a coup, hundreds of thousands of people are protesting in Myanmar 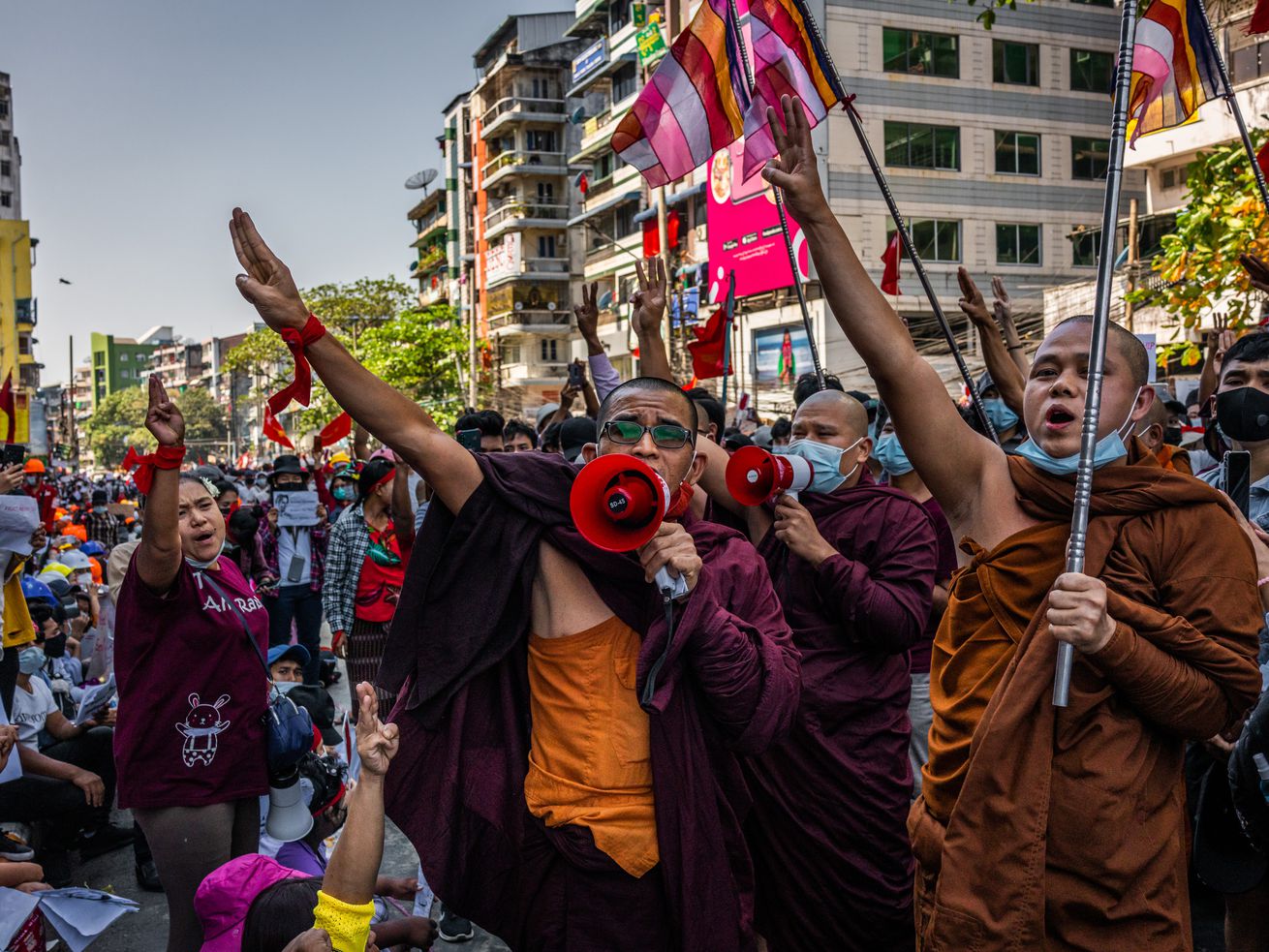 Protests continued in Myanmar on Sunday for the second week in a row after the country’s military seized power in a coup and placed pro-democracy leader Aung San Suu Kyi under house arrest.

The protests are the largest in more than a decade, according to Reuters, with hundreds of thousands of people turning out on Sunday despite the risk of a police crackdown on protesters. And they continue despite a move by the country’s new military government on Saturday to suspend the need for security forces to obtain a court order before detaining suspects for more than 24 hours or searching private property.

Protesters are demanding Suu Kyi’s release and a return to democracy, but Myanmar’s new military government has shown no willingness to grant either request, despite nine days of mass demonstrations.

As Vox’s Jen Kirby explained last week, the protests have mobilized a diverse coalition of people and are drawing on other regional pro-democracy protest movements for inspiration:

Reports indicate a wide swath of people joined in the demonstrations, from young activists to Buddhist monks to teachers, and many more. Some activists have called for a general strike this week, though it’s not clear how widely that message has circulated, compared to the outpouring on the streets.

Many demonstrators wore red, the color of Suu Kyi’s National League for Democracy party, which overwhelmingly won a popular mandate in the last election. Protesters held up three fingers in a salute — a symbol of resistance from the Hunger Games franchise that’s been adopted by pro-democracy protesters in Myanmar and other countries in the region.

According to Al Jazeera, protest tactics have had at least some success so far. Strikes and civil disobedience mean that “trains have ground to a halt, hospitals have closed, and ministries in the capital, Naypyidaw, are believed to be straining amid mass walkouts.”

“The immediate aim is to take away the military’s power by stopping all of its governance mechanisms from working,” activist Thinzar Shunlei Yi told Al Jazeera’s Joshua Carroll. “It will disable the military’s ability to rule.”

Myanmar’s military government has responded by cracking down. Social media sites like Facebook, Twitter, Instagram, and WhatsApp have all been blocked in the country, arrest orders have been issued for prominent activists, and security forces have deployed water cannons against peaceful protesters.

The government also used either rubber bullets or live ammunition to disperse protesters near a power plant servicing the northern city of Myitkyina this weekend, according to Reuters.

NayPyiTaw: police use a water cannon in an attempt to disperse thousands of protestors – calling for an end to the military coup. I’ve been told the cannon was dispersed without any prior knowledge at the peaceful protest #Myanmar #HearTheVoiceOfMyanmar #myanmarmilitarycoup pic.twitter.com/9tB0oo8gme

On Sunday, the military deployed armored vehicles in Yangon, Myanmar’s largest city, for the first time since the coup took place on February 1, leading the US embassy there to urge US citizens in Myanmar to “shelter in place.”

The crackdown is a grim throwback to an earlier era in Myanmar’s history. The country, which is also known as Burma, has been under military rule for much of its existence since winning independence from Britain in 1948.

As Kirby points out, Myanmar’s military has a history of using lethal force to quell protests, perhaps most notably during pro-democracy protests in 1988. Already in 2021, at least one protester has been shot and is believed to be in critical condition with “extensive” brain damage.

The country began a slow process of democratizing about a decade ago, as Vox’s Alex Ward has explained at length, but though Suu Kyi — a popular leader who won the Nobel Peace Prize in 1991 and until this month held the title of “state counsellor” — was released from house arrest in 2010 and allowed to wield some power, the system was never fully democratic.

Ahead of the military coup, it appeared more democratic reforms could be on the way: Suu Kyi’s party won parliamentary elections last year by a landslide on the promise to push constitutional reforms that would have further pared back the military’s political power.

The military, according to Ward, decried those elections as fraudulent, though there is no evidence to support that claim, and finally moved to seize power on the pretense of a national emergency just before the election results were set to be certified by a new parliament.

As one expert, Northwestern University political science professor Sarah Bouchat, told Ward: “[The military is] potentially using this global opportunity, where other leaders are focused on all of the crises around Covid-19 and economic recession, to seize whatever power they can with impunity.”

The US is imposing new sanctions on Myanmar’s military leaders

Since the coup, Myanmar’s military government has been widely condemned by the international community, including by the US, the United Nations, and international organizations like Human Rights Watch.

“We call on Burmese military leaders to release all government officials and civil society leaders and respect the will of the people of Burma as expressed in democratic elections on November 8,” new US Secretary of State Antony Blinken said in a statement earlier this month. “The United States stands with the people of Burma in their aspirations for democracy, freedom, peace, and development.”

The US has also officially labeled actions by Myanmar’s military a coup d’etat, which State Department officials say will “[trigger] certain restrictions on foreign assistance to the government of Burma” as well as “a broader review of our assistance programs.”

President Joe Biden announced Wednesday that the US will impose new sanctions on military leaders for responsible for the coup, including senior general and coup leader Min Aung Hlaing, and freeze about $1 billion in funds currently held in the US.

However, he said, the US will continue to support “health care, civil society groups and other areas that benefit the people of Burma directly.” (In 2016, the US lifted longstanding sanctions on Myanmar in response to the country’s now-undone democratic progress.)

Some Myanmar experts, such as former US ambassador to Myanmar Derek Mitchell, caution that it won’t be easy for the US to meaningfully affect events in Myanmar.

“We don’t have a whole lot of leverage,” Mitchell told the BBC on Saturday. “The key is our allies. That’s a very difficult path, because some of our allies — Japan, India, Korea — have a lot of investment. They will be worried about growing Chinese influence there.”

White House Press Secretary Jen Psaki also signaled that the possibility of China, which shares a border with Myanmar, taking advantage of changes in US policy was a concern.

“Certainly, we are concerned about China’s absence from the conversation and lack of a vocal role here,” Psaki said this week.

Trump’s Iran whisperer
What awaits Joe Biden at the United Nations
Colson Whitehead wins the 2020 Pulitzer Prize for Nickel Boys
Vox Sentences: The president’s offenses
Trumpworld’s “the media is trying to cause a recession” conspiracy theory, explained
How young people are combating anti-black racism in their immigrant communities

How a major oil pipeline got held for ransom