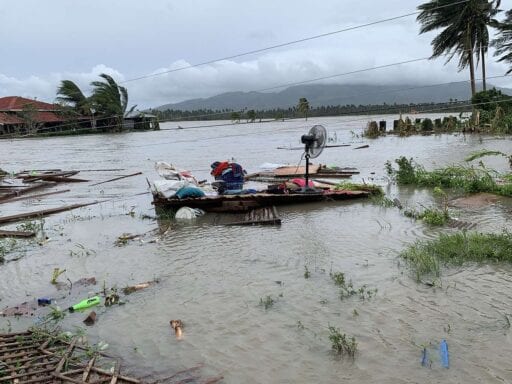 Share
Loading...
An electric fan and belongings are seen on the floor of a destroyed house after Typhoon Molave hit the town of Pola, Oriental Mindoro province, in the Philippines on October 26, 2020. | Erik De Castro/AFP via Getty Images

The storm is expected to hit the central Vietnamese coast, which has seen record flooding, this week.

The Philippines is reeling from disastrous flooding after Typhoon Molave hit the country with 80-mile-per-hour winds and heavy rain.

More than 25,000 villagers have been evacuated from their homes and at least 13 have been reported missing since the storm, referred to locally as Typhoon Quinta, made landfall on the southern island of Luzon on Sunday before heading west across the country.

Nearly 3,000 families from four regions are receiving government assistance, according to the National Disaster Risk Reduction and Management Council, the agency responsible for disaster relief in the country. The council says it has not received reports of any deaths but that rescue operations are still underway by the Philippine Coast Guard.

The Philippines is no stranger to typhoons, with more than 20 occurring in a typical season — indeed, Typhoon Molave is the 17th to hit the Philippines this year. But that doesn’t make it any easier for its citizens to adjust, especially during the coronavirus pandemic.

The island country is also still recovering from the impact of Super Typhoon Haiyan in 2013, one of the strongest in recorded history with 150 mph winds. Haiyan left more than 6,000 dead and 1,800 missing with its destructive storm surges.

Recent research from the Proceedings of the National Academy of Sciences, a peer-reviewed, multidisciplinary journal, suggests that climate change has impacted the location of tropical cyclones, with more storms occurring in the North Atlantic and Central Pacific since 1980 and fewer occurring in the Western Pacific. Using climate models, the researchers predict fewer tropical cyclones overall by the year 2100.

However, another study from Science Advances, an open access journal published by the American Association for the Advancement of Science, showed that due to warming waters, typhoons in the Northwestern Pacific are expected to become 14 percent more intense over that same period.

Molave is still heading west and is set to arrive on the already battered central Vietnamese coast on Wednesday with sustained wind speeds of more than 80 mph. Record flooding has already left at least 114 dead and dozens more missing this month.

“This is a very strong typhoon that will impact a large area, “ Vietnamese Prime Minister Nguyen Xuan Phuc emphasized, while also authorizing the deployment of full force to help save lives.

Vietnam is prepared to mobilize troops, helicopters, tanks, and any additional transportation available to aid in disaster response efforts. The Vietnam Red Cross Society is already on the ground responding to the historic flooding, passing out essential supplies, and helping evacuate people to safe places before the next storm.

10 cities captured nearly 50% of the growth in new tech jobs
Opioid addiction is plateauing. But the crisis isn’t over.
Bernie Sanders got more young voters in New Hampshire than everyone else combined
Millions of Americans are losing their jobs. It doesn’t have to be that way.
House Republican leaders postpone vote on immigration bill in attempt to gain more support
Jared Kushner is trying to sell his Middle East plan at a conference in Bahrain