UK Parliament rejects leaving the EU without a Brexit deal 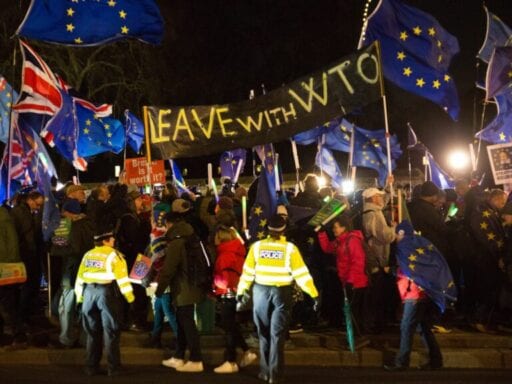 Parliament says it doesn’t want a no-deal Brexit. Now it will vote on whether to ask the European Union for a delay, as Prime Minister Theresa May pushes for a third vote on her Brexit deal.

The deeply divided British Parliament can only seem to agree on one thing: It doesn’t want the United Kingdom to leave the European Union without a deal.

The UK Parliament rejected a “no deal” Brexit on Wednesday. This was part of a series of votes that Prime Minister Theresa May promised would take place this week, and it followed another humiliating defeat of her Brexit deal in Parliament on Tuesday.

The outcome of this no-deal vote played out as expected, though the process was somewhat strange. Members of Parliament introduced and approved an amendment to May’s motion (which specifically ruled out a no-deal exit on March 29) to eliminate a no-deal Brexit altogether. That amended motion ultimately prevailed, 321 to 278.

But this vote solves absolutely nothing when it comes to finding a solution to Brexit. It instead leaves the UK in pretty much the same position it’s been in for months: with a desire to exit the European Union with some sort of deal, but with no apparent majority for the compromise agreement May painstakingly negotiated with EU leaders.

Wednesday’s vote also doesn’t necessarily avert a no-deal Brexit. A no-deal Brexit is the default position of the Article 50 process, the provision of the EU’s Lisbon Treaty that the UK is using to exit the bloc. The only ways for the UK to avoid a no-deal exit are by approving an agreement with the EU or canceling Brexit altogether.

Parliament will have another chance to direct the Brexit process this week, with one more vote on Thursday — this one on whether to ask the EU for a short extension to the Brexit deadline. Postponing Brexit beyond March 29 requires the approval of all 27 EU member states, and they will likely require the UK to give them a specific reason for the delay. The EU has been firm that a reason can’t be more negotiations.

May recognizes this, so she put out a very specific motion: She will ask the EU for a short extension, until June 30, if Parliament passes her Brexit deal by March 20. Yes, that’s right: There will likely be a third vote on May’s Brexit plan next week, nine days before the deadline.

This adds another twist to the Brexit saga, as May is essentially using this extension vote to try one last time to force Parliament to back her deal. Parliament has said it doesn’t want to break up with the European Union without a deal. But that’s about all it can agree on right now.

What Parliament just voted on, and what comes next

What happened in Parliament Wednesday was a bit weird — even for the Brexit era. May had initially promised a vote on whether the UK wanted to reject the option of leaving the EU without a deal on March 29. This proposal was largely expected to pass.

But members of Parliament introduced an amendment that would reject a no-deal Brexit forever and always. That amendment passed narrowly, 312 to 308, and effectively replaced May’s original motion. So what did the prime minister do? Well, she decided to whip her party to vote against ruling out a no-deal exit.

This gambit failed, and Parliament ultimately rejected a no-deal Brexit by a final vote of 321-278.

If that all sounds confusing and strange, you’re not alone. Here’s a sample of the reaction to what went down from the British press:

Literally none of it means anything. it is a shower of shite.

You do begin to ask yourself how long this stuff can possibly go on https://t.co/4qE6Lg1Z6E

“Strong and stable leadership in the national interest”
Stop sniggering at the back pic.twitter.com/mK91wLu1d6

This drama matters because it indicates just how weak May is and reveals the disarray within her own government.

When it comes to the Brexit process, what you need to know is that Parliament has said, pretty clearly, that it doesn’t want to leave the EU without a deal. But as I mentioned above, the only way to fulfill that is for the EU and UK to both approve an agreement or for the UK to cancel Brexit.

Thursday’s vote, which is next on the docket, will be on whether to extend the Brexit deadline. This initially seemed likely to pass, as it would give all factions in Parliament more time to try to pursue a different agenda — from a second referendum to new elections to a softer style of Brexit.

But May complicated all that in a defiant statement after the vote on Wednesday. She said that she would seek a short-term extension until June 30 from the EU if Parliament approved her deal by March 20. This would give the UK time to implement all the legislation necessary to leave the EU.

This means May will almost certainly be putting her Brexit deal up for another vote next week, just nine days before the March 29 deadline. She warned members of Parliament that the EU would likely only accept an extension if a deal was in place, and if they rejected her deal a third time, she would have to seek a longer extension — which means the UK would be legally obligated to participate in the European Parliamentary elections between May 23 and 26.

May is correct on at least one point: EU leaders had previously been reluctant to grant the UK an extension unless a legitimate reason existed. And they’ve also indicated that any extension would have to happen before the European elections.

The EU appeared to be holding firm to that as of Wednesday. According to BuzzFeed, EU leaders have offered three scenarios in which they would likely allow a Brexit postponement. The first is to let the UK better prepare for a no-deal exit — the very same one Parliament just voted against. The EU might also grant an extension to give the UK more time to ratify a withdrawal agreement, which mirrors May’s plan for a third vote. Finally, EU leaders would soften the deadline to allow for political changes in the UK, specifically general elections that might mean new leadership or a second referendum to put the Brexit question back to the people.

The EU would likely make a final decision on any delay at the European Council summit starting March 21 — the day after what’s shaping up to be the third “meaningful vote” in Parliament on a Brexit deal.

The third time might be the charm for May’s deal — especially if Brexiteers in her Conservative Party aren’t willing to risk a prolonged Brexit deadline extension. But a deficit of 150 votes is hard to make up.

Extension or no extension, the future of Brexit remains unclear. Or as May told Parliament on Wednesday: If you don’t like my deal, and you don’t want to leave without a deal, then Parliament “needs to face up to the consequences of the decisions it has taken.”

Trump might help free science that’s locked behind paywalls
“It just went away”: Trump used his son’s positive Covid-19 test to downplay the pandemic
Joe Biden, Bernie Sanders, and America’s politics of epiphany
“This is voter suppression”: black seniors in Georgia ordered off of bus to the polls
The rise and fall of the Hummer, America’s most needlessly masculine vehicle
9 questions about Turkey, Syria, and the Kurds you were too embarrassed to ask