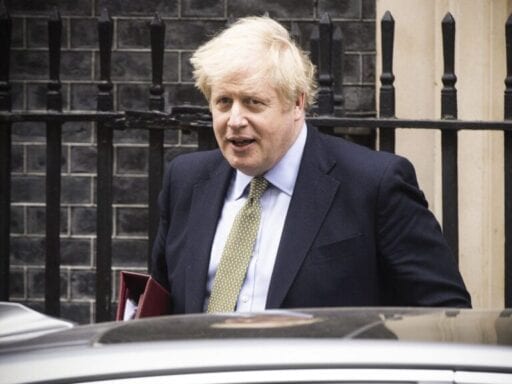 The prime minister had been admitted to the hospital Sunday night.

British Prime Minister Boris Johnson has been moved to an intensive care unit after his coronavirus symptoms worsened.

“Over the course of this afternoon, the condition of the prime minister has worsened and, on the advice of his medical team, he has been moved to the intensive care unit at the hospital,” a spokesperson for the prime minister’s office said in a statement on Monday.

This is a troubling development for the leader of the United Kingdom, who confirmed on March 27 that he had tested positive for the coronavirus. At the time, Johnson, who is 55, said he had “mild symptoms,” including a fever and persistent cough. He said he would continue to run the country in self-isolation.

In the days since his initial diagnosis, however, Johnson’s condition has apparently worsened. On Sunday evening, the prime minister was admitted to St. Thomas’s Hospital in London for treatment, shortly after Queen Elizabeth II delivered a rare address to the country about the coronavirus crisis.

Less than 24 hours later, his spokesperson said he had been admitted to the intensive care unit.

According to reports, Johnson is still conscious, but he’s been moved to the ICU as a precaution, in case he requires the aid of a ventilator. ITV reporter Robert Peston said that Johnson required the aid of oxygen on Monday, but the prime minister is not currently on a ventilator, as of Monday 5 pm ET.

Still, this is a startling development, as the leader of the United Kingdom is now dealing with the same debilitating virus that is causing an unprecedented national emergency.

The UK has been under strict stay-at home orders since March 23.

The UK has over 52,000 confirmed coronavirus cases and more than 5,300 deaths as of April 6, but it’s not clear the crisis has reached its peak there. The UK government lagged behind some other European countries in adopting strict social distancing measures, and has also lagged in scaling up testing.

The UK’s early coronavirus response faced sharp criticism after the government balked on banning mass gatherings and closing schools, choosing instead to pursue the extremely controversial approach of exposing a large portion of the British population to the virus to help establish “herd immunity.”

Weeks before Johnson’s diagnosis, the prime minister said in a March 3 speech that he had visited a hospital, where he believed there were a few coronavirus patients, and that he “shook hands with everybody.”

Of course, the prime minister being sent to the hospital over the coronavirus underscores the magnitude of the global crisis.

Dominic Raab, the UK’s foreign secretary, was previously tasked with standing in for Johnson should he become unable to perform his duties as prime minister. The UK doesn’t have a clear line of succession, unlike, say, United States, if the prime minister is unable to lead or dies. But Downing Street said again Monday that Raab would “deputize for [Johnson] where necessary.”

Raab stood in for the prime minister Monday during the government’s meeting on the crisis. And Johnson’s cabinet members, including Hancock, are continuing to help lead the country through the public health emergency.

Raab, in an interview Monday, said that the government’s business — and focus on coronavirus — will continue. “The focus of the government will continue to be on making sure, at the prime minister’s direction, all the plans for making sure that we can defeat coronavirus and pull the country through this challenge will be taken forward,” Raab said.

“There is an incredibly strong team spirit behind the Prime Minister”

Foreign Secretary Dominic Raab tells @bbclaurak that he was asked by Boris Johnson to stand in “where necessary” in driving forward the government’s plans to defeat coronavirushttps://t.co/1dYhZvGNEX pic.twitter.com/5RzsiClH0a

Still, Johnson’s battle with the virus adds another layer of uncertainty to the UK’s coronavirus crisis.