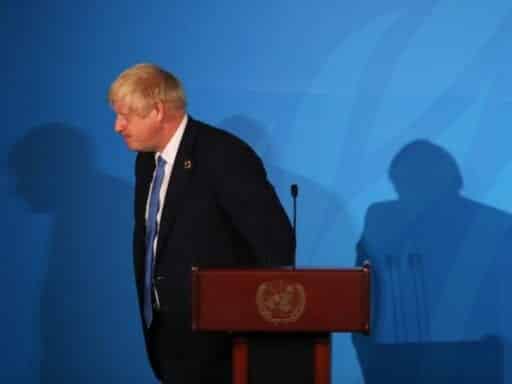 Parliament is expected to return to work on Wednesday, as Johnson deals with the still-uncertain political fallout.

The United Kingdom’s Supreme Court has ruled that Boris Johnson’s five-week suspension of Parliament was unlawful, further roiling British politics a month ahead of the Brexit deadline.

In an unanimous decision by 11 justices, the UK’s highest court effectively ruled that Johnson misled the Queen when he asked to prorogue Parliament for five weeks, from early September to October 14.

Johnson had argued that he needed to end one parliamentary session to get his agenda in order for the next, but the extraordinarily long break — five full weeks — angered critics and opposition members of Parliament, who saw Johnson as trying to sideline Parliament so he could push through his vision of Brexit at all costs.

The Court agreed, saying that prorogation itself isn’t illegal, but that Johnson’s maneuver was.

“The Court is bound to conclude, therefore, that the decision to advise Her Majesty to prorogue Parliament was unlawful because it had the effect of frustrating or preventing the ability of Parliament to carry out its constitutional functions without reasonable justification,” the justices wrote.

The UK’s Supreme Court was forced to weigh in after court challenges to Johnson’s prorogation had been filed in separate UK legal jurisdictions: England and Wales, Northern Ireland, and Scotland. The English and Northern Irish courts dismissed the court cases, but the highest court in Scotland ruled that Johnson’s suspension was illegal. The discrepancies among the three forced the UK’s highest court to weigh in, which it did last week in three days of televised hearings.

The UK doesn’t have a formal constitution, but the court’s decision to weigh in on a political matter like prorogation — and to intercede by saying the prime minister acted unlawfully — is a big deal, and it has the potential to reshape the relationship between Parliament, the executive, and the courts moving forward.

Then there are the political implications, which are only starting to reveal themselves. This deals another brutal blow to Johnson, who’s had a rough go of it in his two-month premiership. And while many members of Parliament are likely celebrating, the UK’s Supreme Court was pretty clear on what this decision doesn’t do: solve Brexit by the impending deadline of October 31.

“It is important to emphasize that these cases are not about when or on what terms the United Kingdom leave the European Union,” the court wrote.

What does this court decision mean for Brexit?

This court said that since Johnson’s decision was unlawful, it was “thus void and of no effect.” That basically means Parliament isn’t suspended right now. The justices said it was up “it is for Parliament, and in particular the Speaker and the Lord Speaker to decide what to do next.”

“Unless there is some Parliamentary rule of which we are unaware,” the justices added, “they can take immediate steps to enable each House to meet as soon as possible.”

That means John Bercow, the current speaker who rightly predicted the upcoming few weeks would be “quite lively,” can act pretty quickly. And he already has, saying that Parliament will meet Wednesday, at 11:30 am. Bercow said it would not be able to hold Prime Ministers Questions (where Johnson answers questions from MPs in Parliament) because of the short notice — and Johnson also just happens to be in New York City.

And even though Johnson is at the United Nations, it’s going to be hard to ignore the chorus of opposition MPs calling for his immediate resignation. The UK’s highest court ruled that the prime minister mislead the monarch, and tried to circumvent and undercut lawmakers.

Johnson told Sky News Tuesday that he “strongly disagrees” with the Supreme Court, but that that he will respect the verdict. It’s not clear if he will skip out on his speech to the United Nations General Assembly — slated for later Tuesday — to return to 10 Downing Street to deal with the fallout from the court’s ruling.

Johnson has staked his premiership on the promise that he will deliver Brexit, “do or die.” That means taking the United Kingdom out of the European Union with or without a deal on October 31.

The only deal on offer remains the one that former prime minister Theresa May negotiated with the EU last year; Johnson and the EU remain at odds on the question of the Irish border, and the relationship between the EU and the UK has, s, as of late, seemed even more publicly tense and frayed.

Parliament has repeatedly rejected May’s deal, but it also opposes leaving without an agreement on October 31. Johnson has insisted that a disruptive, “no-deal” Brexit remain on the table as a tactic to get the EU to budge on new deal. Parliament doesn’t want to flirt with disaster, and so has repeatedly tried to block a no-deal. Johnson’s suspension was attempt to basically take Parliament out of the equation, so he could do what he wanted.

But that move — to try to frustrate Parliament, rather than work with it — has proved to be an extraordinarily flawed decision by Johnson. It focused Parliament, and united an opposition that might not have otherwise existed. He lost his majority in Parliament, and lawmakers still went ahead and passed a law trying to force Johnson to ask for a Brexit extension. And Johnson’s attempts to get rid of Parliament by calling for new elections have also failed, as MPs won’t go along with that plan right now.

Now Parliament may have even more opportunities to make its influence known in the coming days. But more time doesn’t necessarily mean much when it comes to Brexit — and how and when the UK leaves the EU is as unresolved as ever.

ButatThe political implications are also sure to be explosive, though much less clear right now.

What that this is another brutal blow to Johnson, who’s had a very rough go in his two months as UK prime minister. Not only did his plan backfire, but the UK’s highest court basically said one of his first major acts as prime minister broke the law.

The justices said that because Johnson’s suspension was unlawful, the prorogation was “thus void and of no effect.”

“It is important to emphasize that these cases are not about when or on what terms the United Kingdom leave the European Union,” the decision read.

The Court is bound to conclude, therefore, that the decision to advise Her Majesty to prorogue

Parliament to carry out its constitutional functions without reasonable justification

will be unlawful if the prorogation has the effect of

frustrating or preventing, without reasonable justification, the ability of Parliament to carry out its

The pandemic is driving media consumption way up. But ad sales are falling apart.
On Mars, an autonomous rover and helicopter will roam free
Going back to the moon could cost $30 billion. It might be worth it.
The violent protests in Iraq, explained
Several ex-intel officers criticized Trump. Now he may revoke their security clearances.
Democrats’ impeachment report reveals new phone records from Giuliani and others