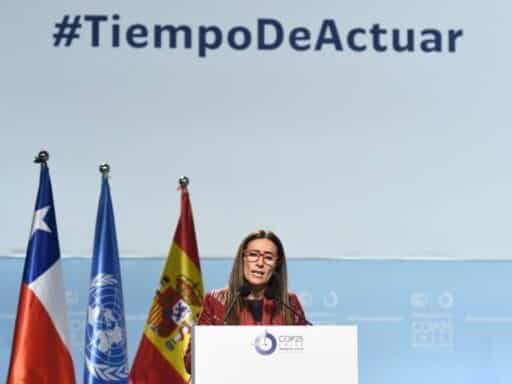 A key piece of the Paris climate agreement remains up in the air.

MADRID – An exhausting international negotiation session on climate change concluded Sunday with an agreement among countries to take on more ambitious goals. That agreement, however, failed to resolve the main issues on the table, like creating rules for trading carbon emissions credits and helping developing countries pay for climate damages.

Almost 200 countries at the two-week United Nations meeting known as COP25 did approve a statement calling on them to do more to fight climate change by next year, when the next round of national commitments to curb greenhouse gas emissions under the Paris climate agreement are due.

But delegates could hardly agree on much else at the longest meeting in the 25-year history of these annual climate talks, which overshot its scheduled end by more than 40 hours.

I am disappointed with the results of #COP25.

The international community lost an important opportunity to show increased ambition on mitigation, adaptation & finance to tackle the climate crisis.

The negotiations this year were meant to nail down the outstanding issues in implementing the Paris climate agreement, but they came at an especially difficult time for many of the countries at the table. China, Chile, and France are facing civil unrest back home. The United Kingdom held a general election during the talks. And India faces a slowing economy.

One of the toughest negotiations was over a section of the Paris climate agreement known as Article 6 that governs international carbon markets.

Done right, it could serve as a vehicle for countries to adopt more ambitious goals for cutting their greenhouse gas emissions by allowing them to pay for reductions in emissions where they are most effective, which may not be inside their own borders. But done poorly, such a system could delay — or even reverse — progress in fighting climate change. Badly designed credits could fail to deliver the promised emissions cuts, or accounting loopholes could lead to the double-counting of credits.

Countries came to the table with different priorities for how to structure these markets, and the rules they should use, but almost all of them left disappointed that the issue was once again left unsettled. “Regretfully we couldn’t get to an agreement on this important article,” said Carolina Schmidt, president of the COP.

As important as it is, Article 6 has been a stubborn hurdle in the international climate accord before — it drove last year’s climate negotiations in Poland into overtime as well.

Tired delegates at the end of an all-night bargaining session spent the final hours of the negotiation litigating the text of COP25’s ambition statement outlining goals for the next year. While they were ultimately successful in creating a stronger statement on the expectation for countries to do more to limit emissions, that accomplishment was overshadowed by deep disappointment in yet another failure to resolve a key issue in the Paris climate agreement.

Equality and responsibility were key points of contention for delegates

At the heart of many of the meeting’s debates was the core of the injustice of climate change: That the people who have contributed least to the problem stand to suffer the most while those who have gained the most from emitting greenhouse gases will suffer the least.

The United States, the second-largest emitter of greenhouse gases (and the largest historical emitter), has already committed to withdrawing from the Paris agreement next year, and was one of the countries watering down provisions for compensating poorer countries for loss and damage incurred from climate-linked disasters.

Several countries also expressed alarm that even seemingly benign language around the need for international financing mechanisms for developing countries to deal with climate change was being diluted by powerful nations.

“This is becoming very worrying for some countries,” said Mohamed Nasr, the current chair of the African Group of Negotiators.

The mechanisms for financing climate change reduction in developing countries, creating a market-based system to preserve nature, and paying for disasters worsened by sea level rise and extreme heat are key steps in resolving these inequities. But countries like the United States, Brazil, and Australia blocked some of the more ambitious language in these proposals, in some cases out of concern that they could be held liable for climate-related damages.

The US delegation did not respond to a request for comment.

“Developed countries failed to provide sufficient assurance that they would mobilize adequate and predictable finance for vulnerable countries to respond to climate impacts,” said Helen Mountford, vice president of climate and economics at the World Resources Institute, in a statement on Sunday. “This resulted in acrimonious negotiations on loss and damage finance and on how to assess progress on the goal of mobilizing $100 billion a year in climate finance by 2020.”

Beyond the immediate danger these disagreements pose to life and health in the wake of climate-linked disasters, they underscore a greater threat: If left unaddressed, they could cause international momentum to fight climate change to falter and the Paris agreement itself to fall apart at a moment climate scientists say we’re running out of time to act.

The poor result at COP25 came despite rising pressure from environmental activists both inside and outside of the negotiations. Swedish climate campaigner Greta Thunberg spoke to delegates from the event’s stage this week and implored them to do more. On the street outside of the COP25 venue, activists from Extinction Rebellion placed nooses around their necks and stood on blocks of ice. At one point, they left a large pile of horse manure in the driveway of the convention hall.

Amid this external pressure and the discord inside the meeting, there was some progress, however. Now 80 countries have said that they will take on more ambitious climate targets. A coalition of US governors and mayors representing about half of the US population said their jurisdictions remain committed to the goals of the Paris agreement. And during the negotiations, the European Union, the world’s largest economic bloc, announced a European Green Deal that would eliminate its impact on the global climate by 2050.

But the urgency for action has never been higher. Global greenhouse gas emissions reached a record high this year, and show no signs of slowing. And scientists have warned that meeting the more aggressive goal of the Paris agreement to limit warming this century to 1.5 degrees Celsius would require halving global emissions by as soon as 2030, a target few nations are anywhere near meeting.

With these concerns top of mind, the world will soon have another chance to negotiate concrete steps for combating climate change: The unresolved issues of COP25 will be back on the agenda in the next rounds of UN climate negotiations that will take place in Bonn, Germany in June 2020, and at COP26 in Glasgow, United Kingdom the following November.

This week’s movie releases are astoundingly good
Andrew Yang endorses Joe Biden: “The math says Joe is our prohibitive nominee”
At court deadline, more than half of separated migrant families have been reunited
I’m Iranian American. I’m tired of being treated like a political pawn.
Meet the moderators of the 8th Democratic debate
Will luxury towers edge out the last of the working-class Chinese in New York’s iconic Chinatown?